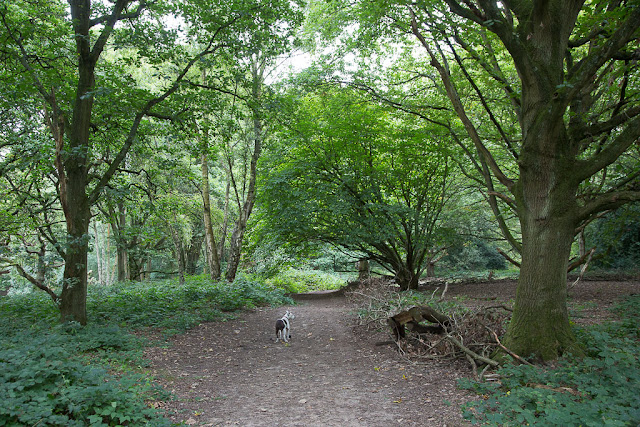 Olga and I went back to Hampstead Heath yesterday, the first time we'd been to the main part of the heath since June. Dog heaven!

I don't think I've ever explained this, but Hampstead Heath is divided into four adjacent parcels of land. The largest part (map here) is southeast of Spaniards Road and Hampstead Lane, and includes Parliament Hill, which overlooks the city, as well as the swimming ponds (where I never swim) and Kenwood House (a historic home and art museum where Dave and I went a few years ago). Then, north and west of Spaniards Road, there are three smaller parcels: West Heath, Sandy Heath and Hampstead Heath Extension.

Olga and I routinely walk either the main Heath or the three other parcels, and lately we seem to have been focusing more on the latter. So it was nice to get back to the main Heath itself. I just love seeing Olga running free in all that open forest. 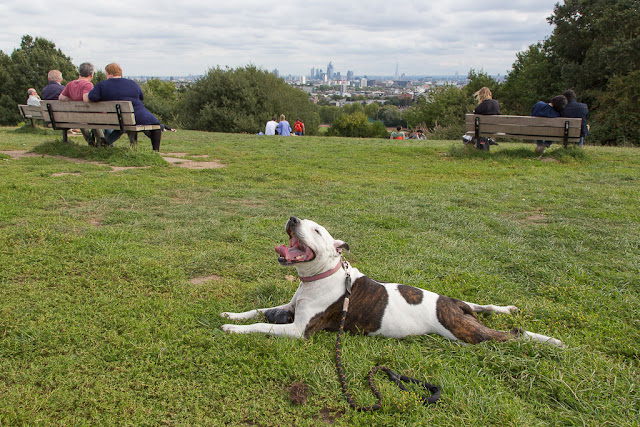 I know, you've seen this photo before -- or one like it. But I can't resist. That's atop Parliament Hill. 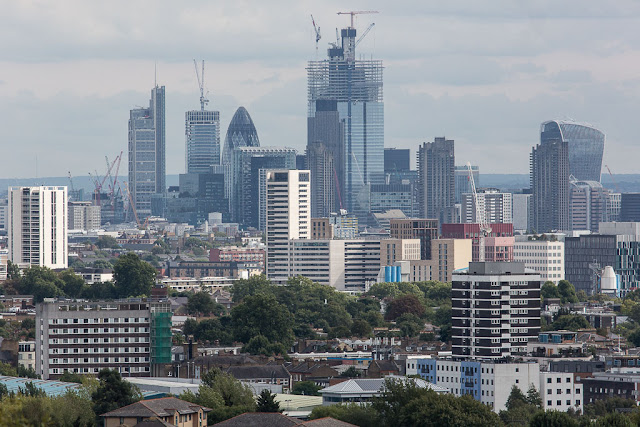 I noticed that the skyline is changing. See that big building going up in the center of the frame? I think it's 22 Bishopsgate, but I'm not sure. And there are apparently several more high-rises in the works in central London, so in ten years or so, things will look very different. (Unless Brexit tanks the economy!) 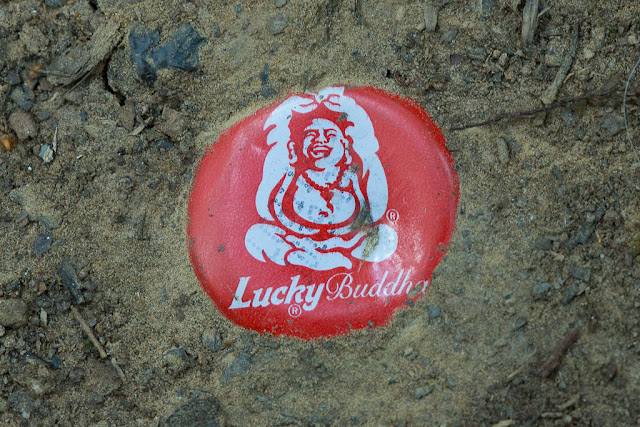 I also found this intriguing bottle cap. Turns out Lucky Buddha is a brand of beer, and the bottles themselves are even more intriguing. I need one for my windowsill bottle collection!

Last night, Dave and I went to see "Blackkklansman." I wish I could say I loved it. It's certainly thought-provoking, and I don't disagree with the message at all -- that racism and race violence are alive and well in the United States, especially under Trump. But parts of it seemed a bit clunky, and apparently the real story has been significantly souped up for the film. I guess that's routine for Hollywood, but it seems a bit dangerous when you're trying to make a point with a "true story." God knows we do have a racism problem, and the truth is scary enough.
Posted by Steve Reed at 7:40 AM

Yeah. I read about "Blackkklansman" and decided against it. When we were in Suffolk I went to see "First Reformed" instead - a very atmospheric and enigmatic film starring Ethan Hawke as a troubled priest. Have you seen it?

Popeye would often say "Arf! Arf!" when he was happy and I imagine Olga saying this too.

Do you ever feel as if Robin Hood and his merry men are going to suddenly appear in the Heath as you and Olga walk?
I have four Lucky Buddha beer bottles in a window. They are pretty. The beer ain't bad either.
I had about the same reaction you did to Blackkklansmen. I'm glad I saw it but it wasn't the most profound example of movie-making I've ever seen. I thought the actors did a great job though.

It's great that land like Hamstead Heath has been set aside in London.

That Lucky Buddha bottle cap is so cool. I've never heard of Lucky Buddha beer, and now I'm going to have to see if we can get a bottle here. Lovely photos.

the forest part of the Heath is so wonderful, wish we had something similar here but alsa not to be in this agricultural community/county. anyway, if it did it would be full of poison ivy and I wouldn't be able to go near it. and yeah, you need a lucky buddha beer bottle. so do I I think.

Glad that Blackkklansman was made and released quickly, it is a rather made for TV feel, but I loved it, It was entertaining and the few distorted "facts" were inconsequential. Just drives it further home what a racist country we live in, no doubt. Black Culture is as valid as any other. It is the white Christian folk who spark suspicion here, They are not to be trusted for even one minute.
I LOVE that photo of Olga, at first , on my monitor and with my bad eye sight , I thought she was in flight across the green! Thank you for that one day when we walked up there, that was really lovely!

That is the part of the Heath that I have walked on. I love seeing the view from Parliament Hill. I'm very impressed with your telephoto shot from there. I usually get so much haze that it's hard to clear up even with the iPhoto tools. Your shot is so clear.

We're trying out Amazon Prime and I watched "The Lost City of Z" yesterday. It's a fascinating story but the film was not as good as the book, I thought. Seems like a constant refrain, doesn't it?

Olga looks full of happy!! I love seeing dogs with their hind legs stretched out like that. Believe it or not, I never did see that until a couple of years ago. The dog we had when I was growing up never laid like that.

YP: I haven't seen "First Reformed" yet but I've heard about it. I'd like to see it, along with the new one from Emma Thompson, "The Children Act."

John: Well, it STILL has that reputation in certain areas. I just ignore whatever I see out of the corner of my eye when the dog and I are walking through those zones!

Ms Moon: Yes, the actors DID do a great job. I had no idea Lucky Buddha was sold in the states! I've never heard of it before.

Red: London has a lot of green space, but the Heath -- being an especially large tract close to the city -- is known as "London's Lung."

Ellen: It IS an amazing resource. And full of squirrels!

Sharon: Yeah, if you're lucky enough to get a clear day, it makes a big difference!

Catalyst: Yeah, that's a common problem! Somehow, envisioning plot and characters and locale in a book makes the experience richer than actually seeing them, with all the details filled in. You know?

Jenny-O: She IS a full-of-happy dog!