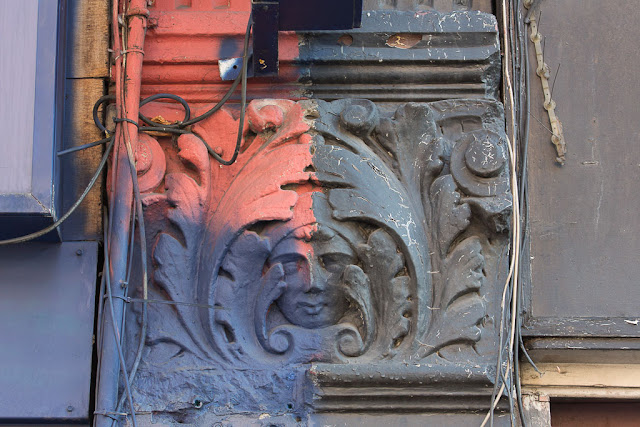 As I walked Olga along Cricklewood high street on Saturday morning, I happened to glance up at one of the shopfronts and notice that it had faces carved into the corners -- above the walls dividing one shop from the next. I've walked that street a million times but I'd never noticed this before.

It's common in Victorian architecture to have carved ornamentation, and I've seen many faces in other areas, but as I walked along I began paying attention to the incredible diversity of Cricklewood's faces. Each and every one is different. 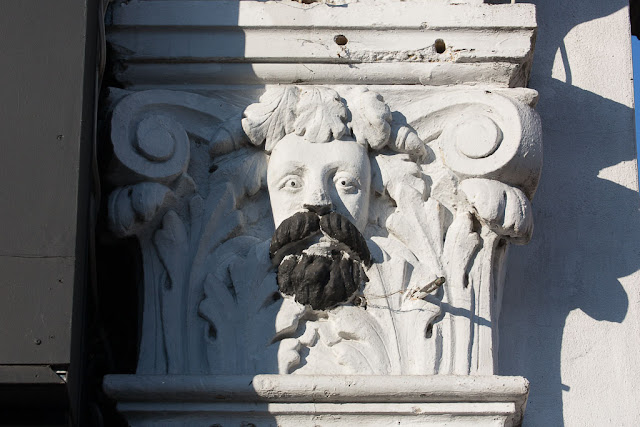 I went back yesterday morning with my camera (and Olga) and took pictures of 67 of them -- nearly the entire street. I'm sure I didn't get them all, but I got a representative assortment.

(By the way, if I ever again get the bright idea to try to walk the dog and take pictures at the same time, talk me out of it. It always turns into a nightmare of Olga pulling at me while I'm trying to aim and focus, and then I get mad and she gets sulky. I've learned this lesson before, but I always seem to forget. Anyway, she consoled herself by furtively eating mysterious bits of food she found along the street -- God knows what, but it hasn't killed her yet.) 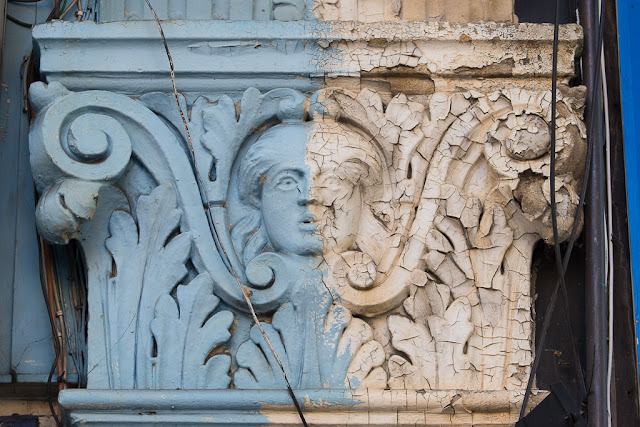 As I said, the faces are very diverse. Some have crowns, some have hats, some appear more lion than human, some have wings coming out of their heads. Some are more skillfully carved than others. There are women... 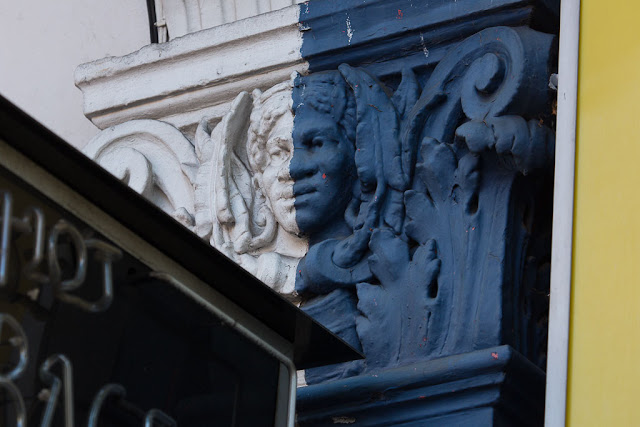 ...and what appear to be people of different races. 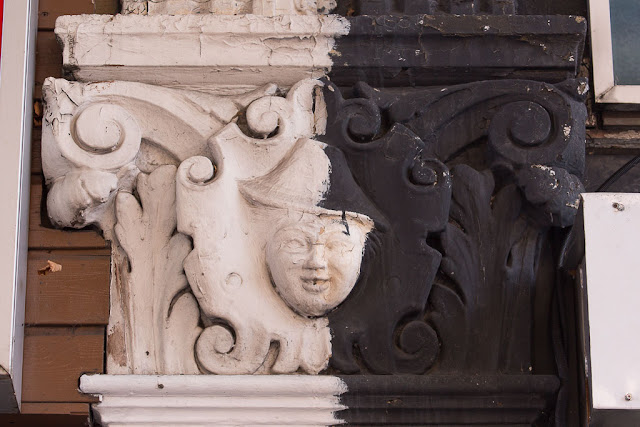 Because it's such an intensely developed commercial area, a lot of the faces are covered by wires and pipes and have signs planted in their foreheads. 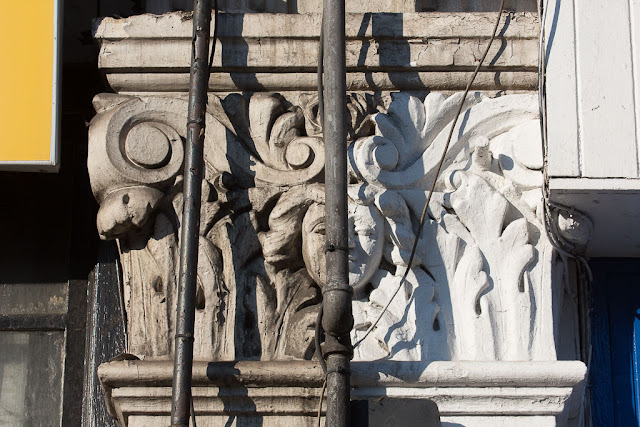 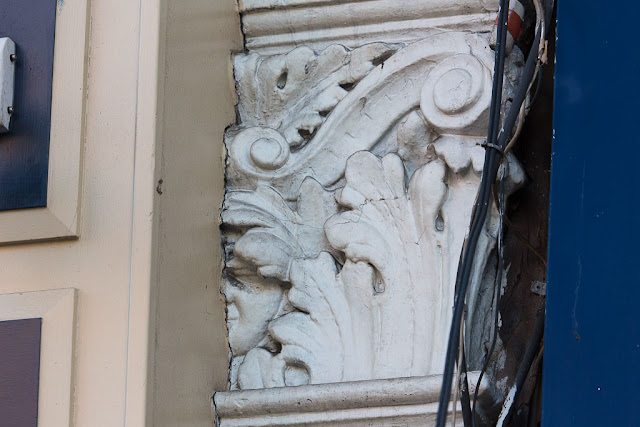 I'm tempted to go back and double-check to make sure I've got all the good ones, and then put a book together for a colleague of mine who's running a volunteer library in the area. Wouldn't it be cool for them to have on display? 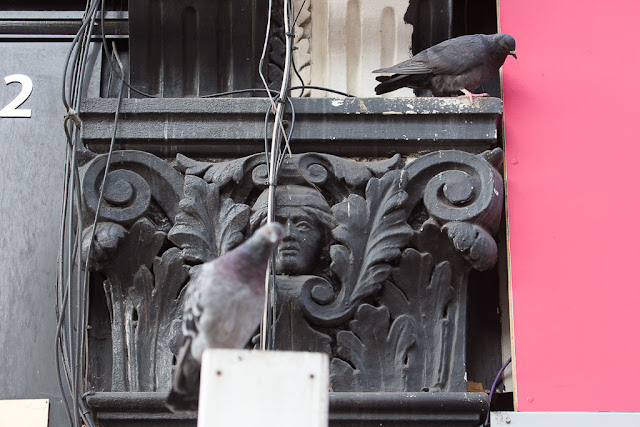 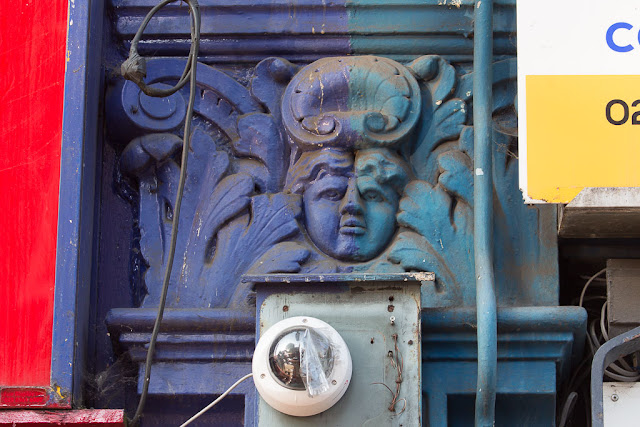 I especially love all the colors. It's very common in London to see building ornamentation painted right down the middle, with the owners of the buildings on either side responsible for each half. That leads to some interesting combinations, especially with all the signage and CCTV cameras and whatnot!
Posted by Steve Reed at 6:45 AM

I think these pictures of faces around Cricklewood is just so intriguing. I lived in London (Finchley) for 2 years (part of a ten year stint when I was a teenager) and somehow all this looks familiar. Or at least, not unexpected.

Amazing pictures. Do you think that they were sculptures of real people? Probably , would be my guess!
You reminded me of a row of faces on a building In London Rd, Leicester. They are of a detective called Tanky Smith...if you " google" Top Hat terrace Leicester you will find it and can read the story of how they came to be there. I spent many years passing them on the bus to school, and in to town !

Well spotted Steve. "It is in the details that we find the true essence of places." - Yorkshire Pudding

These carvings were a challenge as the material used was difficult to work with.

Very interesting faces. The chap with the large mustache and beard is my favorite.

I love these and how cool that they are all different. don't care for them painted two colors right down the middle though. what are they made of? carved stone? plaster?

Oh! I was wondering about the slashes of color. And in one frame, it looked as though one owner had attempted restoration and the other had let his side go to pot.
You would be the perfect person to walk a city with - you see so much more than we mere pedestrians (in every sense of the word).

What a grand observation. Those faces are so interesting, and I love that they are divided by the artistic vision of the different shop owners. Crazy beautiful.

These are fascinating. I think my favorite is the one that is so well preserved on one side and peeling and chipped on the other. It reminds of an ad for a beauty cream. I also like the mustache and beard on one of them.

These are fascinating. I love how the old architecture incorporated these, and it makes one wonder how the artisans decided which face to go where. I do wish we could get back to handcrafted details in architecture nowadays, it all seems so ordinary and boring. Of course, I am living in the middle of America, it IS pretty much boring here! I love your idea of a book of these, Steve! And your attention to the details!

I was intrigued by the different colors painted right down the middle of so many of the faces and was going to ask you about it but then you answered. Seems like the different shop owners could come to an agreement and not bisect the faces that way.

Wonderful carvings -- and so many. I think a book for the volunteer library is an excellent idea.

I chuckled at your description of Olga consoling herself; she's a resourceful girl :) Would she still have as much of an effect on your shots if you clipped her leash to a carabiner fastened to your belt or running shoe? I suppose she would; she's not a chihuahua by any means.

The pigeons made me smile, too!

What a fabulous collection and such a great idea for a book.

You're a journalist AND a librarian. A small amount of research will reveal much about these 'faces', dig around a bit Steve, maybe in a real library, and you will have words to sit with the photographs.
I see this latest venture opening other doors and possibilities.
Alphie

Frances: Thanks for the info about Top Hat Terrace -- interesting! I went to Leicester several years ago (you can search the blog for the pictures) but I didn't see this particular set of buildings. Now I'll have to go back!

YP: Or, as someone else famous said, "God is in the details."

Ms Moon: They're such common features on Victorian buildings that a lot of people don't look closely at them. But they're worth a closer look!

Red: I don't know much about how they were made, but it can't have been easy!

Ellen: I haven't the foggiest idea. I think it's something more permanent than plaster. I'd say carved cement, maybe? Could be stone, though.

Marty: Yeah, you see that a lot -- one half the face is in good shape and the other half is a mess. Kind of like a split personality!

Robin: Isn't it cool the way they're bisected by competing (or complimentary) paint jobs?

StillWater: I often think when I look at older buildings that we couldn't afford to erect such complex structures nowadays. Can you imagine how much it would cost to add hand-carved pediments to a facade? Or even cast concrete ones, if that's what these are.

Catalyst: I like the bisecting, though. It gives them an interesting effect! Like that Star Trek character who was half white and half black. Remember him?

Jenny-O: Olga is a VERY STRONG puller and I think she'd pop the belt loop right off my jeans if I tried to fasten her there. I just need to leave her at home if I'm going to do so much photography during a walk. A few shots is one thing -- she can stay still for that -- but she gets impatient when I'm doing a lot of stopping and starting.

Sabine: Thanks! We'll see if I put my money where my mouth is and get it done.

Alphie: Yeah, I should get the backstory on how they were made and who they depict. I wonder if they're specific local shop owners or famous characters or actors or something.

Any idea where on your blog the pics of Leicester are ?

Lovely photo essay, all the more intriguing because so many of these faces have two colors.