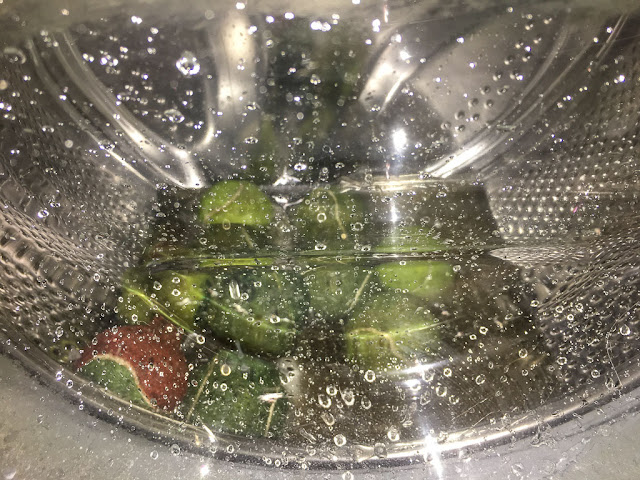 To celebrate Olga's clean bill of health, I washed her tennis ball collection.

I realize this is slightly insane, particularly in a world where many people don't have easy access to clean laundry.

But some of those balls were really filthy. She has a tendency to find them lying around in parks and on the heath, where they've been mouthed by countless other dogs, and somehow the cumulative grossness just became obvious to me yesterday morning. 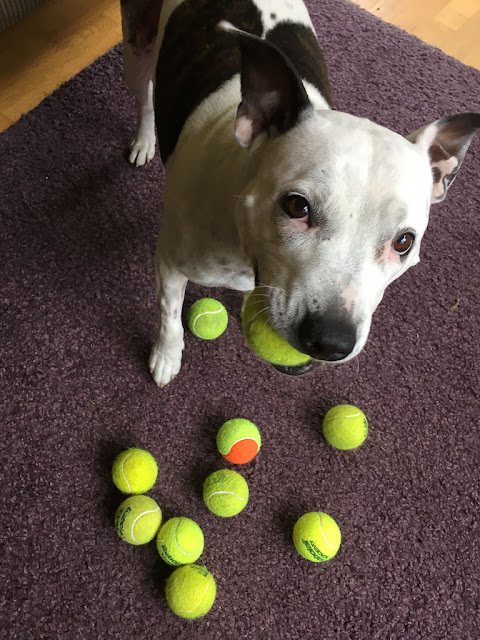 I wish I'd taken a "before" shot, but I didn't. As you can see from the "after" shot above, running them through the washing machine worked really well! (I put it on the delicate synthetics cycle, which is the shortest wash cycle we have. And I guess tennis balls are pretty darn synthetic.)

I cleaned the rest of the house, too, top to bottom -- at least everything I could think of that needed cleaning. It's turning out to be a very rainy weekend, so opportunities for getting out and about are few. It seems like ages since I've taken a real photography walk, but I don't think it's happening this weekend!

In the afternoon I watched "Gone With the Wind," which I hadn't seen in ages. I've always loved that movie, even though so many aspects seem wrong now -- the romanticization (is that a word?) of slavery and Southern culture, Rhett's infantilizing treatment of Scarlett, the depiction of black characters as willing helpers rather than subjugated servants. It's still a great film, beautifully made, and it's amazing to think Olivia de Havilland is still alive! (She's 102.) She and the boy who played Beau are the only living cast members, from what I can tell.
Posted by Steve Reed at 7:46 AM

It's always nice to have clean balls.

Fortunately, mine are not yellow and have not been chewed by dogs.

Oh, you boys and your balls!
I was so proud to have mopped some floors and here you are, Steve, cleaning your entire house!
You humble me.
Gone With the Wind. I loved that movie when I was young. I shudder to think of how it probably informed my developing sense of what a relationship between a man and a woman should be.

and I read Gone with the Wind. It's one of the stories I won't forget.

I guess I am one of the few people who have never seen that movie. Or many movies, for that matter. .

I cleaned both toilets and the counter in the big bathroom. and swept the floor in my studio and that's about as far as I get in housework. I did spend 3 1/2 hours working on a model though.

I had a good chuckle at this post. I don't think I would ever have thought of washing tennis balls. However, I must say that Olga looks like she approves.
I haven't seen Gone With the Wind in ages but, it is a great movie. I watched an older movie last night too. Just now quite as old as the one you watched. I saw The Mirror Has Two Faces, a 1996 Barbara Steisand movie. I must have seen it when it was new but, I didn't remember a thing about it.

I've never thought about washing tennis balls, but now that you mention it, it is an interesting idea. Makes me think about the layer of germs all over those things. Ugh. I never have watched all of Gone With The Wind, but have seen the classic scenes from it. Grand stuff.

I've joked many times that the last movie we saw in a movie theatre was the premiere of "Gone With the Wind". Not true but it's been a long, long time since we've been to a theatre. I have GWTW saved on my tivo queue for watching again some time. Incidentally we've recently dropped Netflix and signed on with Amazon Prime. Watched the first episode of "The Marvelous Mrs. Maisel" last night. And just to stay with your other commenters, Olga looks very happy to have clean balls.

Olga could be in an ad for your washer. Those tennis balls look pristine and she looks so wise! You are a great pet dad; Olga's lucky.

Must have been quite an earful, the balls spinning around in the drum of the washing machine.