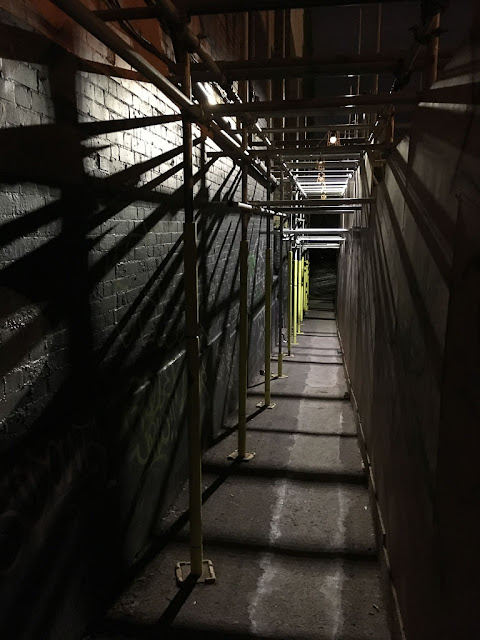 I shot this on our walk back home after seeing "Blackkklansman" Saturday night. It would be better with a person walking through that alley -- if I'd thought about it I'd have had Dave walk down there and back again. Maybe I'll go back with my camera some evening soon. This was shot on an iPhone, which once again leaves me impressed at the quality of the phone camera.

Speaking of "Blackkklansman," I forgot to tell you the best part of the story -- I used my health insurance points and got a FREE MOVIE TICKET! Finally, I'm figuring out how to make that insurance rewards program pay off.

Yesterday Olga and I took a walk in the morning behind that new apartment complex where several balconies burned in a fire back in July. (The affected balconies, by the way, are now shrouded in scaffolding and presumably being repaired.) The development is on a wedge of land between two train lines, the tube and the London Overground, and although the buildings seem nice, the windows are dirty and I think that must come from those trains. We walked all the way to the back, where behind a gate there's a little triangle of land that looks like this: 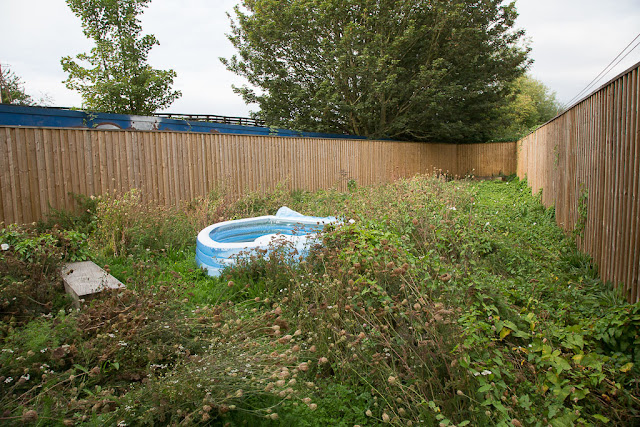 There are a couple of benches, so clearly people are supposed to be able to go in there and sit, but the weeds are so high that it's hard to imagine walking around. It's probably great for bugs and critters, though. Maybe it's meant to be a wildlife garden? The inflatable pool looks like a resident's afterthought, and it was empty when I was there.

Don't say I never show you the hidden corners of West Hampstead.

I spent the rest of the afternoon organizing and archiving photos -- which takes a surprisingly long time -- and walking Olga to the cemetery and back. Then we watched "National Lampoon's European Vacation," which I hadn't seen in years. In fact, I'm not sure I've ever seen it. Dave's sister and brother-in-law mentioned it on their recent stay, when we took Olga down to Westminster, and then when I posted the photos a friend mentioned it on Facebook. I took that as a cosmic hint that I was meant to see it. The humor seems so innocent, even the somewhat bawdy parts -- but it's definitely good for a laugh. (To think Chevy Chase is 74 years old now -- how did that happen?!)
Posted by Steve Reed at 6:52 AM

What did you think of the movie? I find it amazing that you can use points and get a free movie ticket (along with your free health care!). Oy.

That top picture is certainly very dramatic and eerie too. If you take Dave back there for a second picture shoot, you should ask him to dress up as The Elephant Man..."I am not an elephant! I am not an animal! I am a human being! I ... am ... a ... man!"

The top photo is not an area I would choose to walk along at night. And the other photo, lol, a wilderness with a discarded paddle pool. The things you find when you walk off the beaten path.
Alphie

What a depressing little garden area.
Congratulations on figuring out how to get your free movie ticket!

I find that alley very daunting, no thanks.

I just saw Chevy Chase in the audience at the U.S. Open being interviewed by Pam Shriver. I was really shocked seeing him after so many years but here he is my age! How does this happen indeed?

Picture archiving has got out of control here. Maybe something will happen this winter.

kind of a creepy alley. is that scaffolding all along?

I love that first photo! Like you, I'm so impressed with the iPhone camera. That second photo reminds me of a wedge of land somewhere in south London where someone built a dream home. I saw it on some Netflix show about people who build unusual homes. They built it to fit a very small and oddly shaped piece of land between other buildings.
Good for you for getting that free movie ticket!

Your phone does take good photos, and you have such an eye for spotting interesting stuff. When I think about Chevy Chase being 74 years old, I reminded of the lyrics from the song Spring Wind by Greg Brown:
"...My friends are getting older
So I guess I must be too..."
https://www.youtube.com/watch?v=Shi8jpvb7x4

I just saw something on Instagram about a performance art piece at the Tate Britain called "Squash". It looks interesting. I thought I'd mention it in case it might be something that would interest you. When I was there two years ago I saw a different performance art piece there that I watched for several minutes. They are kind of mesmerizing.

It looks (to me) like that little garden just got neglected for a season. It doesn't take much time for things to grow up and get wild. I hope it gets the care it needs at some point.

That alley in the first picture gives me the willies!

I find the top picture rather haunting. Just the sort of place for a robbery and knifing, though the lighting is a bit much for that, I suppose. As SWMBO tells me, I have a vivid imagination!

That back garden looks a little like our wildflower bed does right now (although we don't have a pool - more's the pity!). I say, go back in June & see what it looks like then!