Crispy Zinnias and E. B. White 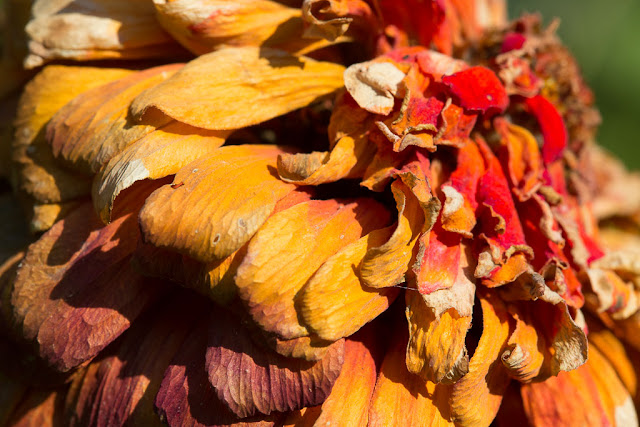 Some of the zinnia flowers are looking very autumnal these days, drying out and turning brown. And yet the plants are still putting out new blossoms, smaller but just as colorful as the first ones. They're doing their best to set seeds, but I'm trying to keep them deadheaded so they continue blooming.

We've been getting some weird stuff through the book drop at work. The other day someone gave us a first edition of E. B. White's book "The Second Tree from the Corner," a collection of pieces he wrote for The New Yorker between 1935 and 1954. I don't think it's particularly valuable (based on what I see on eBay) and perhaps surprisingly, I already have my own copy. White is one of my favorite writers of all time, and I don't mean "Charlotte's Web," although that's a great book -- his writing for adults was amazing. We'll probably put it in one of the conference room bookcases, where our few antiquarian books are located.

And then, yesterday, someone returned a book from the East Riding of Yorkshire school library system. Why on earth did it come to us? I suppose the borrower thought as long as it went back to a school they'd done their part. I looked up the address of the East Yorkshire school libraries office, tucked the book in an envelope and mailed it to them. It had been checked out in 2010 and was probably declared lost long ago, but it was in good condition, so maybe they can still use it.

What did you think of the mysterious column in the Times declaring a cabal of resisters within the Trump administration? I found it weirdly comforting, knowing that there are senior people within the administration trying to protect us all from the Orange Menace. But as a friend of mine pointed out on Facebook, should we really feel better that there's an internal coup in the White House? And this person clearly values aspects of the Republican agenda (deregulation, more military spending, tax "reform") that I personally question, so we can't lose sight of the fact that we need to clean the whole hornet's nest out of office.

(What would E. B. White, a great internationalist, have thought of Trump? His assessment would be entertaining and eloquent and probably damning.)

I've been walking to and from work to get some exercise and to rack up points using my health insurance app, so I can get some free Starbucks coffees and movie tickets. (Obviously not really free, since I'm paying for the insurance.) I haven't really mastered the system, though. For a long time it wouldn't give me any points until I completed my annual health questionnaire, which I never seemed to have time to do. (I finally did it yesterday.) I've also found that when I do earn a coffee, I seem to have only a few days to redeem it before the reward vanishes entirely. That's the problem with these reward schemes -- I don't want to be ruled by my health insurance app. I'd rather just go buy a coffee when I want one!
Posted by Steve Reed at 7:41 AM

I went to school in The East Riding of Yorkshire - it's where I am from - but I must declare that it was definitely not me who dropped that book in the book drop bin! I was not in London at the time and I heartily dispute any association between me and that book. Besides, I have never read "Fanny Hill"!...Oops!

I plan to come back and comment about the NY Times editorial when I have a bit more time, but let me just say I don't think much of it. It sounds like another craven opportunist sticking by Trump (at least publically) to accomplish their agenda while secretly knowing how awful he is. Stand up and speak out if you really care for our country...otherwise STFU, you're part of the problem. This whole mess pisses me off no end.

I agree with Jennifer completely. STFU and do your job which is to enact the 25th amendment. Did you read the NY'er piece I linked?
What a bizarre carrot on a stick for your insurance company to use. Most of the drinks people buy at Starbucks have more calories and fat than a milkshake. Ah well, better than nothing I suppose.
I may be a little cranky this morning. Sorry.

yeah, when I read the NYT op-ed at first I was a little delighted but on further thought, it pissed me off. they know how bad/dangerous Trump is, even discussed using the 25th amendment, and then wennied out. cowards. they are undermining our whole system working to get the worst parts of the republican agenda done.

Your last paragraph is a topic that always sends me on a rant. Points cards are one of the biggest rip offs there are. The points area carrot on a stick that you can never make use of.

I read the infamous letter right after they published it and I have to say I was both puzzled and mildly assured by it. I immediately sent the link to a friend and I also commented that I don't agree with the writer's view of accomplishments. I don't call those good things. The letter is now almost all that is talked about in the news. I certainly hope that there is not something else going on that we are not hearing about. It's a complicated issue. I see positives and negatives to the whole thing. And, while all of this is going on we have the Supreme Court hearings which are a bit of a circus too. What interesting times!

I too have mixed feelings about the NYT op-ed piece. It is somewhat reassuring that some people on the White House staff are trying to make sure Trump does not go completely off the rails. I still feel the Republicans are totally spineless and will not stand up against many of the President's decisions. I also fear Trumps rages that he will do something even more dangerous. He is so horribly divisive as it is.

I too love E.B. Whites' books. Maybe I should reread them for some comfort.

When I first read the anonymous op-ed I was somewhat relieved that there are some adults in the room, but then realized how outrageous it is for the "resistance" to continue to allow an imbecile to be president while acknowledging his dangerous incompetence in order to keep tax cuts and military funding. This is what we have become. I've read that it is harder to invoke the 25th Amendment than it is to impeach, and here we are. Crazy times ahead for sure!

Re the op-ed - the phrase "having the courage of your convictions" comes to mind. Being anonymous doesn't do that. It seems to me that the writer wants to retain power now and in the future, but ultimately be able to distance him/herself from Trump when things go south.

Some points systems are good (I'm thinking of the airmiles we get on various purchases, which saves us hundreds of dollars on groceries each year, and bank points on credit card purchases, which we convert to retirement savings dollars yearly) but some - like your health insurance points - don't seem to be of much use at all. And why Starbucks when most of their stuff is so full of calories?! Seems counter-productive!

I can only understand how Trump's "base" sticks with him when I read that the less well educated areas voted him in. It is a truly sad situation that will be remedied one day but the damage done by him and the terribly odious Mitch McConnell will last a long time.

I don't think anonymous is a hero, but I will admit that if the person (or persons?) who wrote the piece had put his/her/their name on it, it would have been more easily dismissed in one news cycle. The guessing game keeps it in the news. That said, I totally agree that whats happening in the White House is tantamount to a coup—the country is being run be shadow figures who were not elected, and whose agendas, quite frankly, I do not trust, so where does that leave us? I guess we should be grateful if someone is keeping the toddler president from blowing up the world, given that the Republican Congress refuses to act in the face of our national social and constitutional crisis.