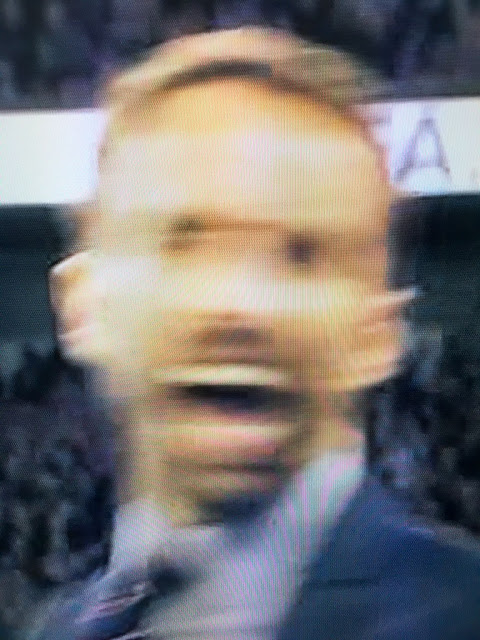 I have nothing of substance to write today, so it's time for more photos from the ol' iPhone!

The other day Dave put the television on pause and we were treated to this scary/hilarious expression on the face of a sports coach. (No, we weren't watching sports. I think it was a commercial.) 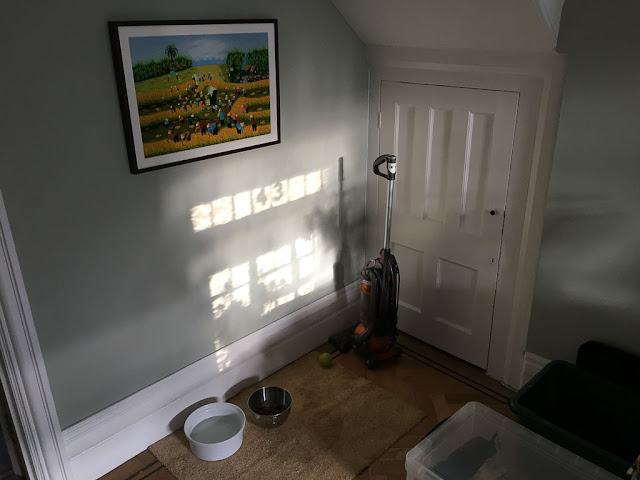 Here's another example of interesting morning light in our front hallway. (And now you know our house number!) The embroidery on the wall we bought in Vietnam -- it shows workers harvesting rice. 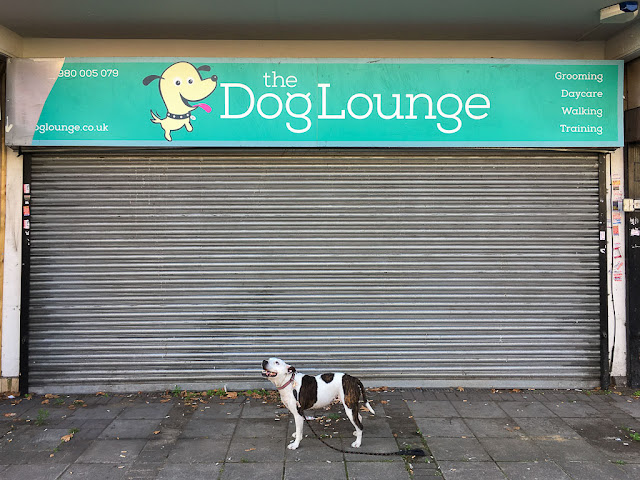 Olga was sorry that the Dog Lounge was closed when we passed early on Saturday morning. (Although she doesn't look sorry, and come to think of it, she doesn't really like baths...so maybe she was actually thrilled!) 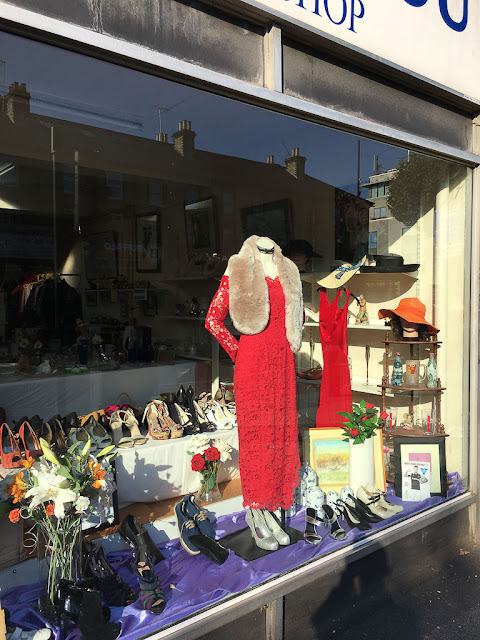 The window of a charity shop in Cricklewood. It's never open when I'm over that way but it looks like an intriguing place. 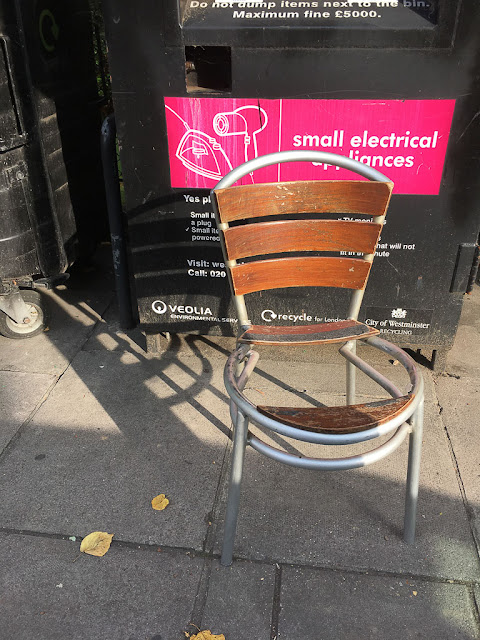 A broken chair, set out for trash collection. By the way, do you see the "small electrical appliances" bin? The council collects them for recycling. I don't remember ever seeing that in the states, although maybe it's done now. Pretty cool, huh? 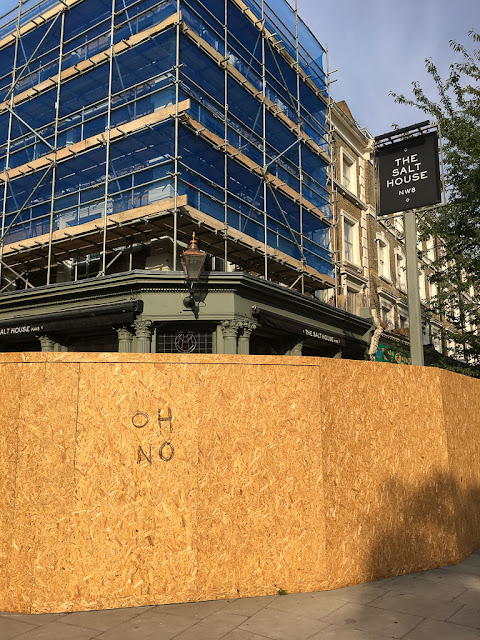 This was a pub in St. John's Wood where my colleagues used to assemble on Fridays after work. Sadly, it has closed and I believe it's due to be turned into flats (but I'm not sure about that). Anyway, someone clearly isn't happy with the changes. 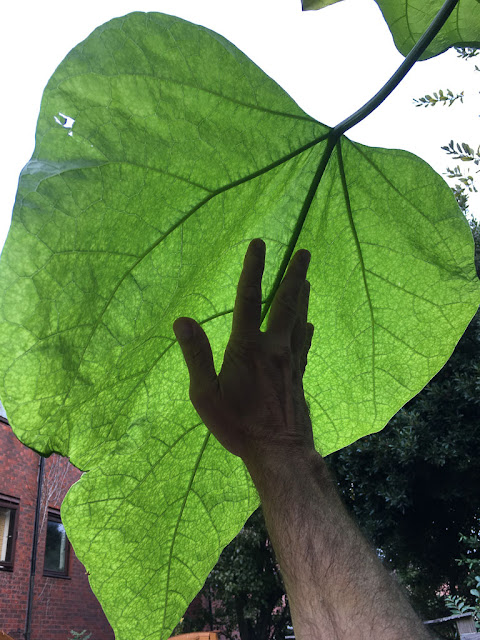 Olga and I pass this tree with HUGE leaves on our morning walks. I think it's a catalpa? I tried to include my hand for scale. 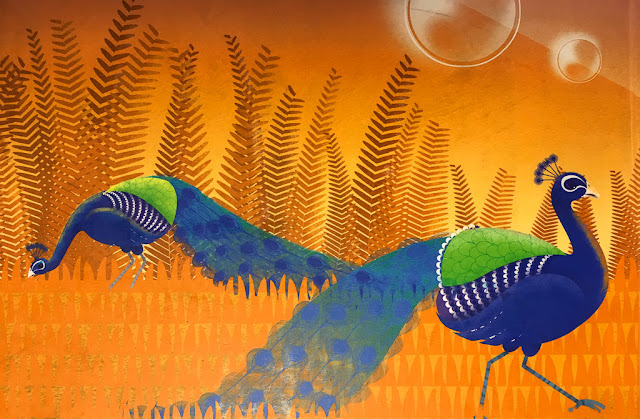 And finally, the back cover of a math textbook we were discarding in the library. I just liked the artwork. I'm not sure what peacocks have to do with math, but I guess the poor artist had to come up with something.
Posted by Steve Reed at 7:16 AM

the stop- mo face is awesome! Paint it and frame it , you could be a rich man! That leaf is LARGE!!WOW, a tree , you say? It could eat you!

A lovely illustration of peacocks ! Can anyone explain why Americans say " Math" and we say " Maths" ?

"If a peacock farmer buys ten peacocks from Reed's Peacock Emporium and fourteen peacocks from Ms Moon's Floridian Peacock Suppliers and then sells four peacocks to animal lover John Gray in Wales how many peacocks has he got left?"

YP wins the day! I was intrigued by those peacocks too.

Wonderful photos! I'd like to see a close-up of that Vietnamese embroidery.

Yes. YP wins the comment-of-the-day award!
You know I love your iPhone photos.
The"OH NO" comment seems so polite. And the leaf- wow!

could be a catalpa. great photos as usual and yeah, peacocks on a math book?

That is one scary looking face you captured from the TV. A piece of art from your trip seems like the perfect souvenir. I like the idea of recycling small appliances. Recently, the plug for my hair dryer broke and it wouldn't work any longer. It was a perfectly good hair dryer but putting a new plug on it would cost as much as a new one so I wrote a detailed explanation and packaged it up with all the broken parts and took it to Goodwill hoping they would have someone who could fix it and sell it on. We waste so much stuff!

The peacocks have stumped me as well. Can I second the suggestion for a close up of the embroidery, pretty please? :D

I wish we could recycle small appliances here. Or better still, that someone still had the skills and desire to open a repair shop for the ones that could be fixed.

Another cool collection of iPhone photos. Now you've got me wondering about something mathematical relating to peacocks. Are their feathers a calculable display of balanced beauty?

That embroidery looks amazing! And I love the TV picture - very cool.

As far as math/maths - maybe we're just to lazy here in the US to add that extra "ssss" to the word? Ha!

I thought the chair in front of the electrical appliances bin was an electric chair. :O)

Wow, I think that might be the biggest leaf I've ever seen! I really like the idea of a collecting area for small electrical stuff. Too much of it just gets tossed directly in the trash.

I believe that leaf belongs to an Empress or Royal Empress tree. I have 2 of them and the leaves are huge like that. Sycamore trees have large leaves as well but I don't think they look like that.