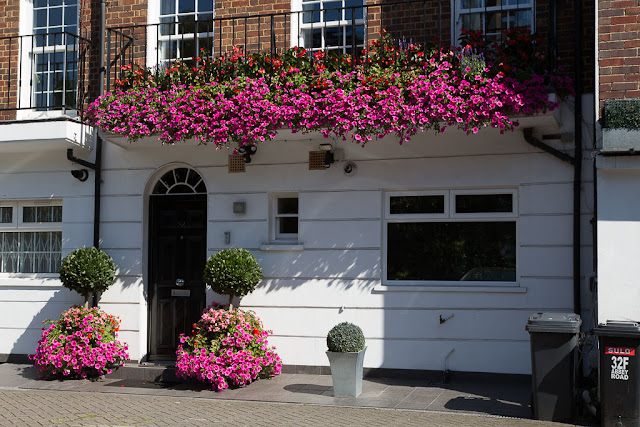 Well, we finally got rid of the wrong chair. The furniture company came yesterday afternoon and took it away. I'd tucked it into the corner of the living room, barricaded behind Dave's loveseat and a big houseplant so the dog wouldn't climb on it. (It had to be "pristine," the company warned us, or they wouldn't take it back.) Anyway, I'm glad to have it out of my life. Allegedly, the correct chair will be on its way to us in a little more than three months.

I've been trying to thin out our possessions a bit -- mostly taking stuff to charity shops that I've brought home from my walks with the dog. I'd found two stools that I took to the library yesterday, thinking kids could sit on them to use the computers. I don't think they're going to last long -- they already look a little wobbly, after just a day! Kids are tough on furniture.

We also had a big glass vase -- it must have been three feet high -- that I found one morning. I brought it home thinking I'd give it to the catering staff at work, because they sometimes need big vases for floral displays at events. But then Dave decided he liked it, and he kept threatening to put dried flowers in it. I hate dried flowers. I hate them with a passion. They are dusty and pointless. So I finally talked Dave out of keeping it and spirited it to Oxfam, hopefully putting an end to the dried-flower fantasy.

Before donating it, I wanted to wash it out, so I took it into the back garden yesterday while I was waiting for the chair-delivery people. (I figured washing something that size would be easiest with the garden hose.) A spider had built an elaborate web between the buddleia and the crocosmia on either side of the path onto the back lawn, so I found myself crawling under the web to get out to the grass. I had to crawl under that web about five times, which is hard when you're carrying a three-foot-high glass vase! I hope that spider appreciates my thoughtfulness.

Finally, last night, we took Olga to the vet. At last, we're going to get some x-rays of her back legs, to see what's happening with her joints, and we're going to have some small skin growths removed, too. That will all happen on Wednesday. I feel like we've been living long enough with a "wait-and-see" approach to her stiff hindquarters -- I just want to know what's going on there and if it needs to be treated. 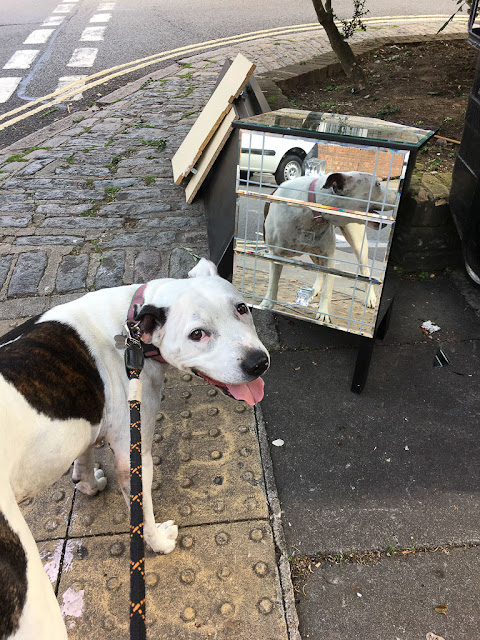 We found this hideous mirrored nightstand on one of our walks over the weekend. Olga implored me to bring it home, but I said no.

I hope that there will be nothing seriously wrong with Olga......distressing for you and expensive too! There was a little pug type dog on a vet programme the other night who was walking oddly, and the diagnosis was that his big " balls" were getting in the way !!

Maybe I missed this in previous posts but what on earth is Dave's "love seat"? The mind boggles. I am imagining a purple velour chaise longue from a Victorian bordello complete with historical stains.

I agree with you on the dried flowers! Yuck!

I hope Olga will be okay and won't require anything too painful or expensive. I know how how worrying it is when something's wrong with our sweet pups!

You crawled under the spider web? Really? Good Lord, Steve! You are such a good, good soul.
Glad you prevailed over Olga about that night stand.
How do you feel about dried palmetto fronds? Asking for a friend.

I duck under spider webs when I see them but I walked right into one this morning. why do they want to build them in the pathways? Olga probably just has arthritis. our boxer did and we would give her an aspirin (rated for arthritis) everyday hidden in a ball of liverwurst. seemed to help her.

and and yeah, dried flowers...no.

The long story of the huge glass vase. I wonder what it had been used for before being thrown out. What's going to happen to it now.

I hope all goes well for Olga and that her prognosis is good. I do love her reflection in that hideous mirrored night stand. And really kind and good of you to not disrupt the spiderweb. I'm sure the spiders appreciated immensely!

Fingers crossed that Olga's aches and pains may be mitigated simply. I can't believe you crawled under a spider web carrying a large glass vase! You build good karma wherever you go.

I have some lovely wooden flowers that I got at a craft fair years ago - the blossoms are just shaved bits of wood that are painted. And I COULD wash them, but I never do, so yes they are dusty.

I hope you have a mirror at floor level at home so Olga can admire herself. And good luck with the vet visit. I'm always amazed when I hear of someone spending huge sums of money on medical treatments for their pets even though I can understand the love behind it.

Agree with you about dried flowers, plastic ones are better...ha ha, Olga is a good shopper! I do hope all is well with her.

I'm sure the spiders would appreciate your care if they realized what you'd done. Maybe they'd have appreciated it even more if they'd CAUGHT you in it! (have you see the Far Side cartoon to that effect? Two spiders build a web at the bottom of a children's slide; one says to the other "if we can pull this off, we'll eat like kings!")

I hope Olga's issues are not serious, perhaps just aging, and your mind can be set at ease.

Trust me, the spiders of the universe appreciate your thoughtfulness. Olga looks cute in that mirror!