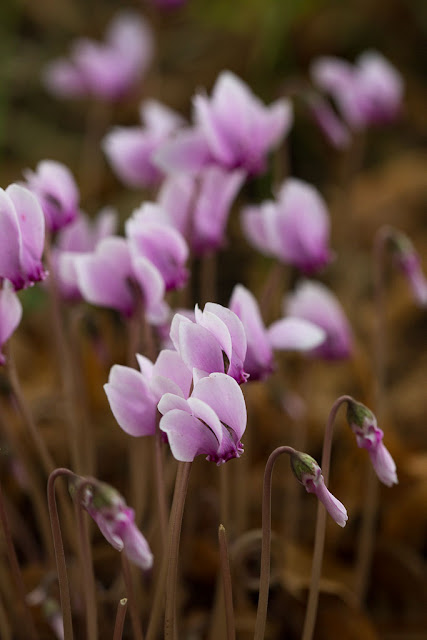 When I walked Olga last weekend we saw several clumps of cyclamens blooming on Hampstead Heath. I didn't realize it was the season for them, but apparently it is. Dave and I planted some in the garden several years ago but I think our squirrels, those nuclear-powered wood-chippers, dug most of them up and ate the bulbs.

We have NOTHING planned this weekend. Can you believe it? It seems amazingly luxurious to have two days in which to read and sit around and take care of little tasks at home. (I know, I've only been back at work about two weeks, so I can't complain too much!) The weather is even supposed to be nice. I've got laundry going and I'll probably take the dog out later.

I've also got several New Yorkers to get through. One of them had a short, interesting article about past presidential malfeasance. I've been thinking about Trump's behavior relative to Nixon's and others', so this was especially helpful. It's definitely worth a read. 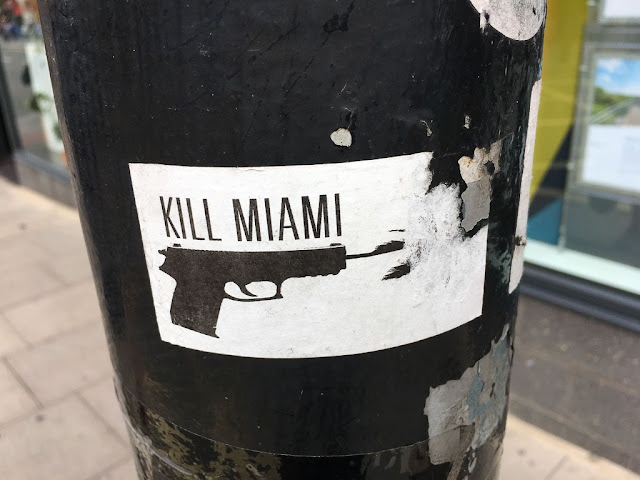 I found this curious sticker on the way home the other day, and being a Floridian, I had to take a picture of it. Turns out it's a person's name -- a DJ from Manchester. Will Miami ever not be associated with crime and handguns? "Scarface" and "Miami Vice" were thirty-plus years ago, and yet the image lingers. For the record, I spent plenty of time in Miami and never saw a gun, and my great-aunt and -uncle lived there half a century and had a quiet suburban existence. I wonder why he didn't call himself Kill Manchester?
Posted by Steve Reed at 7:46 AM

Kill is his first name? Now I am wishing that I had called by own children Torture and Mutilate. Such names would have turned more heads than the nice, safe Ian and Frances.

Cyclamens, of all sizes and colours are winter delights.
For some really weird reason I thought Kill Miami was a label on a wine bottle!
Probably something to do with looking at the photo on my phone screen and the glass of wine (now empty) sitting on the table in front of me. LOL
Alphie

Our Grandson made a statement to his Mum the other day when he was about him going to America for work. He lives in Roman Road in London. She was worried about the guns in America and he said 'Mum, there is more violence and guns in London than where I am going' that shut her up. lol
Briony
x

That's his name? Talk about tasteless.
Our recent house guests from outside London told us about the huge number of stabbing someone in the city.

Well- let us face facts. Here we are, a group of decidedly not very pop-culturely aware people and we are all discussing a DJ because his name is KIll Miami so he chose a pretty good name.
The cyclamens are beautiful. I've bought some in pots before but they've always died.
Have a wonderful, relaxing weekend. I need to catch up on my NY'ers too. I'm reaching a point though, where I start reading an article and think, "Do I really need to know any of this?" and often decide that no, I do not.
I am old and lazy. You are still young and curious.

It sounds like you will have a nice relaxing weekend ahead. Me too! Not much on the agenda. Right now I'm going to watch the McCain funeral service on TV. All of the memorials have been so touching.

I guess names like that are meant to grab attention, and it works. What times we are living in. I prefer the times of Flower Power! Beautiful cyclamens.

pretty cyclamens. they only show up in the fall here as annuals in pots and baskets. our summers are too hot for them.

Trump and his minions took it pretty good in the McCain funeral this morning and Ivanka and Jared had to sit their and listen. An amazing crowd of powerful people from both parties in attendance.

Interesting article -- now I need to go brush up on other presidents. Not being American, this part of my education was been sadly lacking until I took an interest during the Bush administration!

Cyclamens are pretty but the one time I tried to grow them indoors they died a swift death. Overwatering, I think.