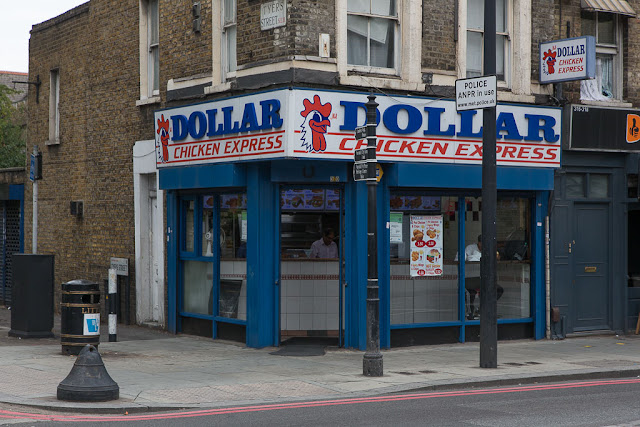 Nobody seems to want to get out of bed this morning. Dave's alarm went off several times before he staggered to the bathroom, and Olga and I are still lying here, even though it's 6:37 a.m. and I need to be at school in an hour. I'm singing in the faculty choir at our opening assembly -- as I do pretty much every year -- and I have to be in early for our last rehearsal.

This year we're singing "Stand By Me," which is at least an easy song -- two verses, and we all pretty much know it by heart.

I'm having a terrible time keeping to my work schedule in general this week. I had to take my cereal to work yesterday in a plastic take-away box and eat it there because I ran out of time at home. (And we were out of milk!) I think it's partly because Dave and I have had such a busy week, with our visitors and whatnot, and partly just adapting to a schedule again after our leisurely summer. 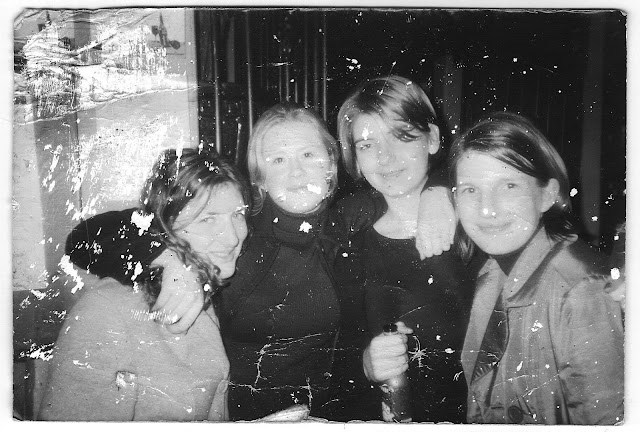 Yesterday on my way to work I found this picture face-down on the ground. It doesn't seem very old, but it's interesting that it's black-and-white. You don't often see black-and-white prints these days, do you? I wonder what the story is here -- are they sisters? Friends? It looks like a party of some sort, with the one woman in the center holding what appears to be a Smirnoff Ice bottle. (That would date the photo to some time after 1999.)

And why was it discarded? Did someone have a falling-out? Maybe one of the women was secretly -- or not secretly -- in love with one of the others and it all ended badly. Or maybe they're just work pals with little personal involvement and so the picture didn't have much worth. Or maybe someone just dropped it and didn't mean to discard it at all.

So many possibilities. Feel like writing a short story?

(Top photo: A chicken restaurant in Kennington, following the model that all British fried chicken outlets must have American-sounding names.)
Posted by Steve Reed at 6:54 AM

Intriguing photo! I would place it as older than you do, and I can't even say exactly why - the hair, I think. And clothing. Just a guess, obviously. I'm not good at fiction, so I'll pass on that - ha ha

Your blog is great. I read a lot of interesting things from it. Thank you very much for sharing. Hope you will update more news in the future.
geometry dash meltdown
the happy wheels games
animal jam play wild

They don't look like "women" to me Steve. I see them as teenage girls. The one on the left looks rather like my daughter did when she was sixteen. I had to do a second take on that. It was a happy moment in time - four friends together. I wonder if they are still in touch or perhaps their lives have veered away in different directions. I bet their favourite pop song was "Geometry Dash Meltdown" by The Happy Wheels Games with "Animal Jam Play Wild" on the flipside!

Perhaps someone was moving and the photo fluttered from the top of a box onto the pavement? Enjoy your assembly.

Not too many clues in that photo. No outrageous clothes or hairstyles. Everyone is looking at the camera. It's a quartet of girls who work together and have gathered in their local work pub to farewell the girl second from left who is a little older than the others. She is keeping something back from them. Her life is off on a path to some other place, and it is not a prospect she is looking forward to, whatever it is.
That's my story outline.
Alphie

It's interesting how timeless that photo is, nothing stands out to date it, not hairstyles or clothes. The turtleneck is the only clue to time, as people don't much wear that high necked style anymore, at least where i am. The fact that its an actual photo also dates it, as photos mostly stay digital these days. You find the most curious items on the street, possibly because you're aware. And how hard it must be to transition back to school after a summer of setting your own schedule. Soon you'll be back in the flow.

They look like sweet girls but I think I'd rather write a story about the Dollar Chicken Express.

Mary Moon - PLEASE WRITE A STORY ABOUT THE DOLLAR CHICKEN EXPRESS! It would be fabulous. I know - I've read your work :)

I just used the Whoopi Goldberg version of that song to answer a Facebook quiz. It's from the movie Boys on the Side.

You find the most interesting things there. Makes me think how all photos tell a story and sometimes even unintended ones.

I don't feel like writing a story but you make a good suggestion. I had a large collection of pictures that I used for writing prompts for kids in middle school.

three of them at least look like they could be sisters but the pose looks more like friends.