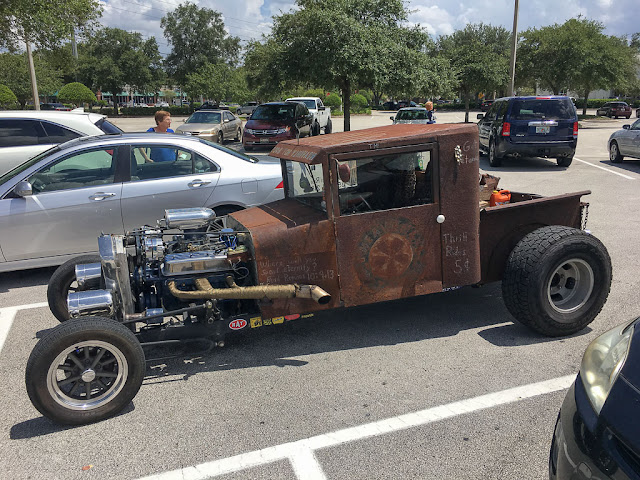 My mom and I went to Publix yesterday to do a little grocery shopping, and when we came out of the store, this was parked next to her car. Not your ordinary Toyota or Nissan!

(That's my mom in the background, waiting patiently for me to stop taking pictures.) 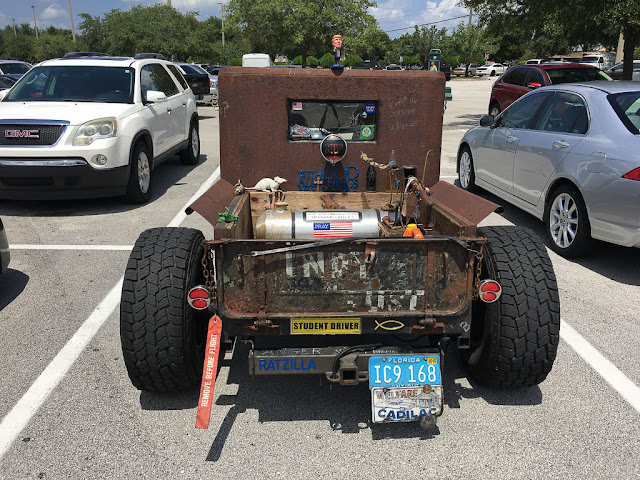 The car was a curious mix of religious ministry, political advocacy and fun. It had the words "Heavenly Hot Rods" painted on it in several places, along with Bible verses and the Christian fish, and was adorned with several plastic rats and lizards, a license plate declaring it a "Welfare Cadilac" and an orange "Remove Before Flight" tag, among other things. The interior was carpeted and upholstered in faux leopard. 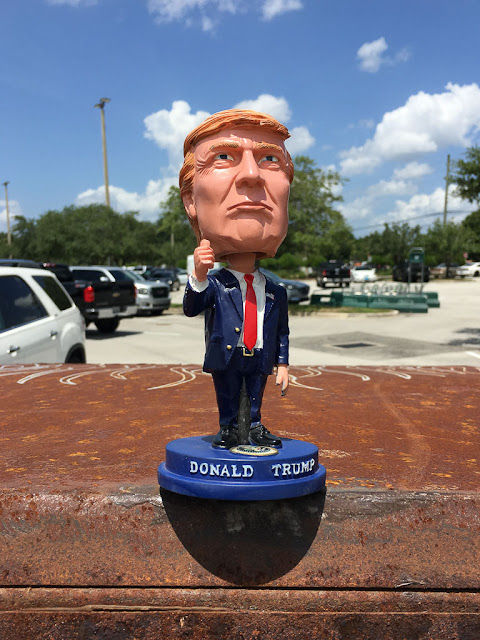 ...a bobblehead of Donald Trump. Although doesn't it look more like Dan Quayle? 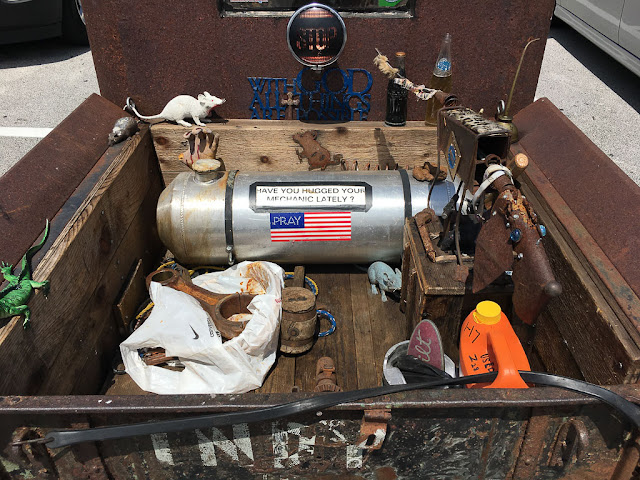 It was a peculiar and entertaining find, but needless to say, if I had a conversation with this person I'm pretty sure we'd be arguing fairly quickly.

Aside from the Heavenly Hot Rod, our day was uneventful. I tidied up a few things around my mom's condo, but the place is in pretty good shape after my top-down cleaning in February, so there's not a lot of work required on this trip. We watched our newly digitized home movies, and about four episodes of a Tom Selleck show called "Blue Bloods" which isn't bad. American television is taxing -- a lot of VERY LOUD commercials.

I've also been trying to clean up my mom's Facebook account. I've discovered a serious flaw with Facebook. Somehow, my mom -- who only has about a dozen friends -- got on the radar of some people with frankly pornographic Arabic-language profiles. I don't know whether they're real people or just bots. But anyway, now all of her suggested friends are these same sorts of accounts, complete with pictures of various anatomical parts and sex acts. My mother is 81 years old and doesn't need this aggravation, but you CANNOT TURN OFF Facebook's friend-suggestion function, nor can I figure out how to reset it so she no longer gets this content. Based on what I've read online from people with identical problems, my only option seems to be to report each individual suggested friend for inappropriate content, and that's ridiculous given that fifty new ones appear every day. So apparently my poor mother just has to live with Algerian pornography, or we have to delete her account and set up a new one. What a ridiculous situation! (Fortunately, I don't think her real friends see the list of people being suggested to her by Facebook -- I think this is a private annoyance rather than a public embarrassment.)
Posted by Steve Reed at 12:01 PM

that car is certainly a conversation piece! Your poor Mother,, I don't use Facebook.

"Hey buddy! Watcha takin' pictures of my motor fer?"
"Please don't push me sir. I didn't mean any harm. I was just admiring it!"
"Well nobody - even some goddam limey with his ma in tow - takes pictures of my hot rod without my permission!"
"I'm really sorry."
"Lemme see you deletw those pictures NOW!"
"Okay! OWWW! Please don't squeeze my neck. I'm sorry right!"

I guess that truck is for real "rust colored." Love it - folk art, pure and simple. I am sorry for your Mother. Social media is complicated enough for older people.

perhaps you could contact FB about the problem. cool truck. sort of a budding art car.

I see similarly decorated vehicles around here sometimes. Rather confusing. I suspect what we might call "mental differences."
As art, it works. As a political message it's muddled.
Oh Lord. Facebook probably never foresaw such weird problems.

Another good reason to stop using Facebook. I quit going there about 9 month ago, mainly because of the whole Russia thing. You will probably laugh at me (as I'm sure my sister does) but, I've come to view Facebook as an instrument of evil. I know, overreaction.
When I was reading your description of that strange vehicle, I somehow knew it was owned by a "Trumper".

I kind of knew that vehicle would be owned by a Trump acolyte, scriptures and all. I don't get it, then again, I do. Sorry about your mom's facebook problems. I really dislike facebook these days, I think Mark Zuckerberg is a weasel and who struck lightening once and has no idea what to do from there and has been swept up on a tide of opportunists who use him at will. Over, rant over. Enjoy your time with your mom.

Well that explains something to me - I have a friend (in her 70s) who was complaining about all the pornographic friend requests she was getting, but I never get those so I thought maybe she was overreacting (I get requests all the time from men who are obviously not "real" - but they're never pornographic. Darn it. Just kidding!).

Love the heavenly hot rod! I might have been tempted to do something to the bobble-head. I don't know what, but it would have been rude!

Try https://www.fbpurity.com, it works. You can 'clean up' your Facebook page, just the way, and as much, as you want to.

It looks like you've got a good suggestion for cleaning things up...Best of luck with that...if you're ever down this way and feel like helping me clean...LOL. Greetings to your mother. You are a good son.

Tom is getting a lot of ads for busty women coming up, he swears he hasn't been on any websites like this. Mmmmmmmmmmmmm.
Briony
x

One might begin to think that, by the looks of that jalopy that you were ...... in the deep South!

oddballs and kooks and you come up with some very strange creations.

Well, that's a very interesting vehicle, and yes, I am being diplomatic :D But it makes a great conversation piece, and I'm being sincere about that.

I started getting those "friend suggestions" on FB a month or two ago, but they are all real people with normal hobbies :) I can't understand how they are selected. And I wish there was a way to turn it off. The suggestion above is a browser extension, which I'm not comfortable downloading, but I'm very conservative about what I download. Other people might like it.

That car, tho...I would bet a nickle it's owner is easy to spot!
There is a lot to ignore on facebook, I do report a lot of questionable characters, and block as many as I can in one evening. I think the less active accounts get targeted the most.Anyway, it likely will not be long before we all have to look for an alternative social media obsession- certainly is not twitter!!
Mr. Man likes to watch MSNBC, the commercials are brutal! They are generally for medications to ask your doctor about...he is keeping track , writing them down, during one program alone he jotted down seven drugs to ask for.

Very impressive car. It would never pass the MOT here or if so, would cost a bomb in motor tax.

I left fb months ago. All that Cambridge Analytica / Russia stuff but esp. since Zuckerberg said that he would not bar Holocaust deniers for freedom of speech and because those unfortunate deniers just made an honest mistake and fb is the place to learn or whatever. Yuk.

And the way your poor mother's account has been invaded would be another reason to get out. Fb users are just merchandise.

Laurie: Isn't it? Mom was warning me to be careful about photographing it, but I said, "PLEASE. If someone drives around in a car like this, they have to expect to be photographed!"

YP: Fortunately the driver was on his way INTO the store when I took those shots, so I had maximum time before he returned!

Colette: It IS folk art!

Ellen: I can't find a way to contact Facebook -- I don't see a customer support number or e-mail address or anything like that. And on the help forums, Facebook staffers say we have to just report each profile. Argh!

Ms Moon: Yes, definitely muddled! I have a feeling talking to the driver would be surreal.

Robin: The rats and mice are a nice touch! Mom doesn't want to delete the account -- I proposed that but she wants to keep it.

Sharon: I don't think Facebook itself is evil, but I think it has some serious flaws. It's built on the assumption that everyone using it will have good intentions. I don't think they adequately envisioned the ways in which it could be exploited.

37P: Yeah, I think Zuckerberg was in the right place at the right time, to a large extent!

Catalyst: We'll continue to work on it!

James and Brigitta: Thanks for the recommendation! I'll take a look at it, though I am wary of downloading any browser extensions on my mom's computer, as I'm sure you can understand.

Briony: I'm sure he's telling the truth! This stuff just comes out of the woodwork. It's truly strange. I don't get any of it on my own account, but apparently the more friends you have and the more you use Facebook, the more reliably it can predict what you want and who you want to be friends with. (Which I suppose makes sense.)

Jenny-O: Yeah, I'm with you on the downloads. I'm not comfortable with that either.

Linda Sue: Yes, the less active accounts DO get targeted. It's very strange. You'd think Facebook would want to be even MORE careful with less active patrons so as to draw them in, but instead they get showered with this garbage!