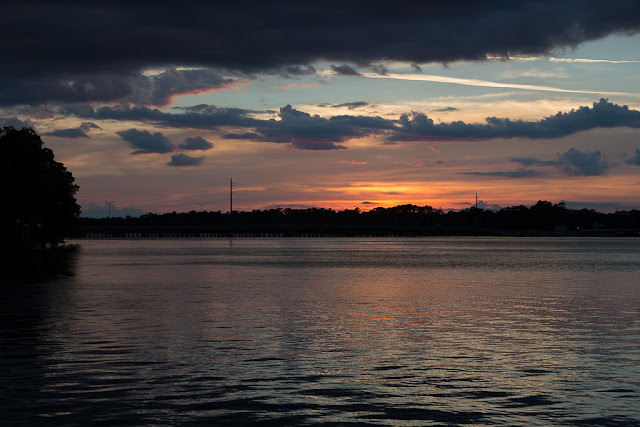 Why do so many older guys love to talk about cameras?

I love taking pictures, but I am completely indifferent to the technology. The beauty of photography for me is in choosing and framing the images. Yes, I know how to set the camera and get the shot, but I've never understood these guys who want to sit around and talk about F-stops and camera speeds and megapixels and essentially reduce all of photography to numbers.

And then they want to talk about camera gear, lenses and tripods and filters and how much they spent for each item, which also makes my eyes roll back in my head.

Last night, Mom and I went down to the dock on Julington Creek, a tributary of the St. John's River, to watch the sunset. We found that some of her neighbors, an older man and his wife, had colonized the end of the dock with a tripod and were taking pictures. Of course I pulled out my own camera, and the man proceeded to quiz me about how I was shooting, on what settings, etc. He was nice enough but LORD. 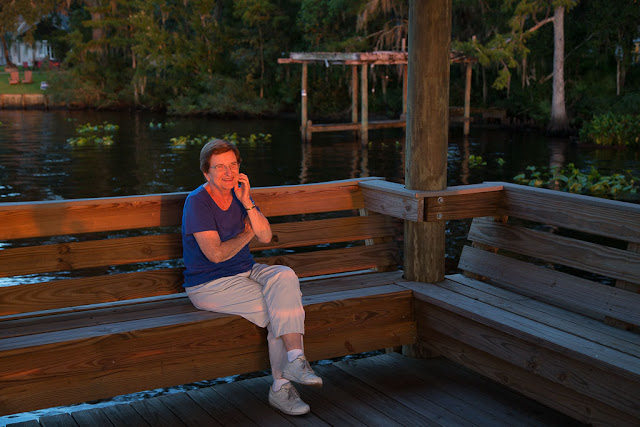 It was a good hour for that golden evening light. I got several shots of my mom as she sat chatting with the neighbors. The sunlight really was that color. I haven't adjusted it at all.

We hung around the house most of the day yesterday. In fact, after we took our morning walk and sat on her balcony hoping the hummingbird would return (it didn't) and had lunch, I decided I had to get out of there. So I announced that we were going to Goodwill and then to Starbucks.

My mom is not at all a thrift store person, but she tagged along obligingly. I had to make my Goodwill sweep pretty quickly, but I did find a couple of prizes. I got a nice shirt for work and also this: 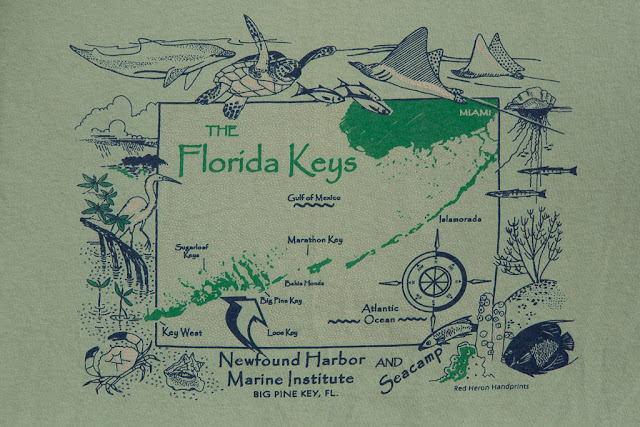 It's a t-shirt from an educational center in the Florida Keys that I attended in the eighth grade! 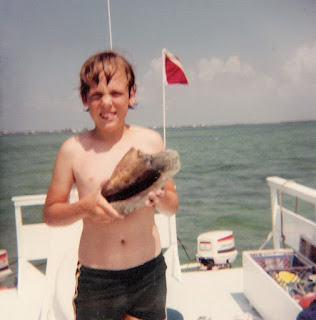 In fact, here's a really terrible picture of me at Seacamp in 1980, hoisting a conch shell that I'd found while snorkeling. If I remember correctly it had something living in it -- a crab, maybe. I didn't try to take it home.

Anyway, I was pretty psyched by that t-shirt. I also found one from the West Virginia Penitentiary that gave us a good laugh -- even the people browsing near us thought it was a hoot. I kind of wish I'd bought it too. It would have given me a reputation in London.

After Goodwill and Starbucks we came home and watched a funny Tina Fey and Amy Pohler movie called "Sisters." Watching it with Mom was kind of mind-blowing -- there were a fair number of penis jokes and that sort of thing -- but she laughed up a storm so, hey, no harm done. It's not like she doesn't know how the world works.

Speaking of which, I think her Algerian pornography problem on Facebook may be getting slightly better. I've been reporting and blocking dozens of accounts that have been recommended to her as "friends," and I'm hoping the Facebook algorithm is beginning to recognize that those are not the kind of friends she wants.
Posted by Steve Reed at 11:36 AM

The t- shirt from the eduction centre and its beautifully illustrated marine (and bird) life was an excellent find in the thrift shop.
I consider people (okay, men) who talk about cameras in the way you describe would no doubt talk about cars in the same way. It's about having more expensive & better products than anyone else. It's about boasting...
Having said that, a good camera does give better results than some rubbish phone camera like mine!
The last two hours of sunlight in the day are fabulous for photography. Your Mom looks as though she is having a lovely time.
Alphie

I'm glad you are having fun with your Mom. I best she is loving this chance to spend time with you. Congrats on the Florida Keys t-shirt find.

Oh man! Someday, Steve, you and I ARE going thrift shopping. I mean it! And we are going to have a good time! We will find all of the prizes and we will have a contest for who finds the most hideous offering. And no one will discuss F-stops. (Though knowing me, there will be a few F-words.)

I love seeing the setting sunlight there and most especially your mom bathed in those colors. So beautiful. I know NOTHING about cameras or photography, but I do know how to look around and point and click. Sometimes I wish I knew more than that, but then I just move on. Cool finds at the thrift store, and a grand photo of the young you.

You got some great sunset photos in spite of having to explain the benefits of your camera. Women have it a little easier when it comes to the situation you found yourself in. Those types usually won't ask a woman about her camera.
I love the T-shirt. What a great find for you and those childhood memories.

I have a feeling that, one of these days, those fancy-dancy cameras will go the way of the poloroid and development fixer . My son was in the northern part of Spain recently and the pics he took with his phone were just wonderful!

Good for you to be spending this time with your mom. Some day you'll look back on these days with a warm remembrance. Not soon, though. Love your first photo.

I wonder if the people "talking tech" about cameras may just have the math/science/engineering kinds of brains, as opposed to the more artistic, abstract-thinking kind of brains. It's not that either one *can't* do the other kind of thinking, but maybe that they don't prefer it. My husband has one of those linear brains, and I have a squirrelly one, so I have had plenty of occasions to think about this over the years. If you get my drift. lol

If your mom is anything like me, she treasures these times with her grown up son immensely. Kids . . . they develop into kind, thoughtful adults and then they up and leave home!

You make a good point about people reducing photographer to numbers. Now live dangerously and buy the t shirt. I dare ya to wear it to school.

Alphie: I think you're right with the car parallel. A camera, to me, is just the device I have to use to get the picture, which is what matters. In much the same way that the car is just a device I use to get around. I don't care about the devices themselves.

Colette: We've both had fun on this trip, though I think she's looking forward to getting back to her routines!

Ms Moon: YES! We would be great on a thrift-shop outing, I just know it!

Robin: Pointing and clicking is all that matters, honestly. The beauty of photography lies largely in the eye of the photographer!

Sharon: Well, even though it's sexist that they DON'T ask women about their cameras, consider yourselves lucky! LOL

Peace Thyme: Actually, they already have, in many ways. I think most people just use camera phones nowadays. And for most purposes they work great! It's only with certain types of shots that you need anything more specialized. (Macro pics or night shots or that kind of thing.)

Linda Sue: It IS hilarious, in a twisted way. It's just so bizarre. I don't know how Facebook got the idea that my mother is a North African sex fiend.

Catalyst: It's always good to visit. I try to get back to Florida at least twice a year -- and this year I'll be here three times.

Jenny-O: Serendipitous! That's the word! I think you're right about the techy brain thing. I definitely have a left-brain, not a right-brain.

Red: I did go back and get it! I'll wear it to school one of these days, and I'll send you photographic documentation. :)