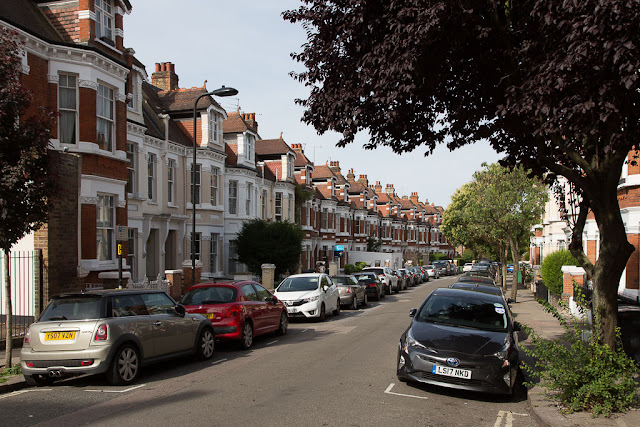 This is Inglewood Road, a street not far from our flat. It's a little older than the street where we live, probably Victorian, lined with terraced houses on each side. I often walk Olga there, and the other day I took a stroll looking (just out of curiosity) for the site of a big neighborhood fire that occurred while Dave and I were away in Vietnam.

I found the fire-damaged building, but that's not the most interesting thing I noticed. There's something odd about these houses. 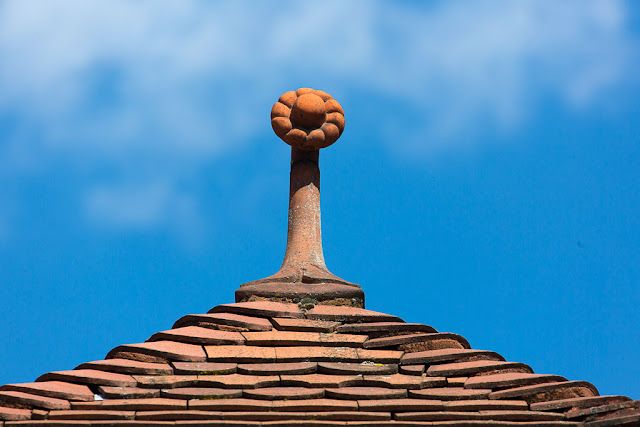 Most of them are topped with a finial. That in itself isn't odd -- many houses of that era have a little touch of decoration on the roof, usually a spire. (Houses on our street have pointy spires, in fact.) Along this street, the finial of choice seems to be a flower. 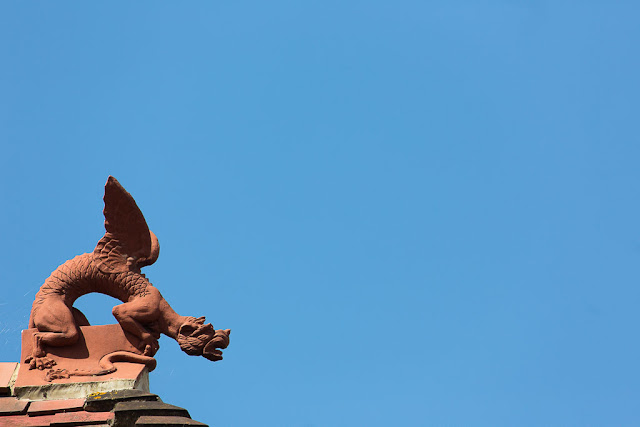 ...have dragons on the roof! 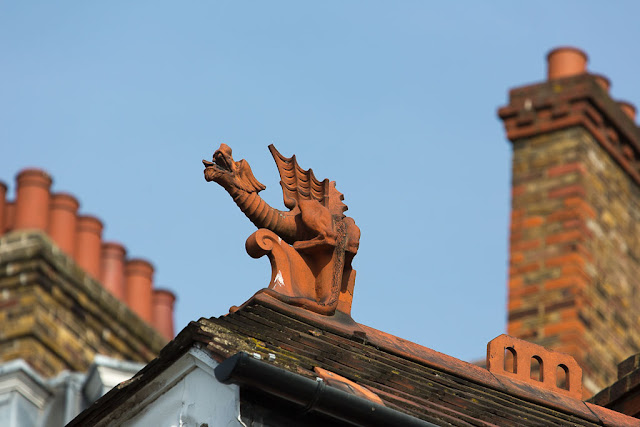 They're right across the street from each other, and the only two houses (from what I can tell) to be so adorned. I wonder what the story is? Were the owners of these houses Welsh? Did they have to pay extra for their dragons? Inquiring minds want to know!
Posted by Steve Reed at 6:17 AM

How wonderful and quirky!

Those dragons are handsome. And I love the row of rooftops in the first photo - reminds me of the beach, all that sand coloured clay (or whatever they are made from).

The first filial seems like a sexual image but I would not recommend filial relations!

We have a few dragons around here, I have a feeling that they are meant to protect the house.
Briony
x

Whimsical dragons and yet fierce in their way. Funny how dragons still catch our imaginations. Owen got a dragon toy recently that he held on to almost the whole time he was here this week. He loves it! And August was reading a dragon book when I went to get him out of the car the other day. "Do you like dragons?" he asked me.
"I do," I said.

they are excellent dragons. you should research it and find out.

The area seems to be well kept up. The particular style is interesting.

Ms. Moon, you should August the book "Dragons Love Tacos". It's hilarious!

What a great neighborhood! The flower on top is silly looking but there is nothing at all silly about the dragons! They are taking their job seriously. Olga, clearly not a threat, good thing! Dragons can be cranky.

Now I want a dragon on my roof! That is so cool. But I would also take a flower if a dragon wasn't available.

I love streets like that where all the houses are in sync with each other. There must be a story behind the dragons. If they are across the street from each other, they must be snarling at each other.

The dragon for my roof. Have a good trip to Florida tomorrow.

I want a dragon on my roof! Maybe when we buy a house this fall we'll find one to put up and we can mystify our new neighbors! Haha.

Interesting! It makes me think of Harry Potter :)

Jenny-O: Yeah, I can see how the common color scheme seems beach-like!

YP: I'm sure someone, somewhere, has put a completely obscene finial on their house. It had to happen.

Briony: That makes sense! I'll have to pay closer attention and see if I see them on other streets.

Ms Moon: Some of the most popular children's fiction books concern dragons. They DO still seize our imaginations.

Ellen: I tried to research these particular dragons but I didn't find anything, at least not right away. Maybe I should look more generally at the use of dragons in Victorian architecture?

Red: Yes, it is a nice neighborhood!

Jennifer: I don't know that book! I wonder if we have it in our Lower School library? (Where the little kids' books are.) You should definitely get a dragon of your own! :)

Linda Sue: The flower is peculiar -- I've never seen that before either.

Robin: I agree, a flower would do in a pinch! Our house, sadly, doesn't have a finial at all.

Sharon: And as you know, this is a common look for an English street, with the houses all built the same and giving that rhythm to the streetscape.

Bug: Maybe they (or some like them) inspired JK Rowling? There are a lot of architectural dragons out there, though usually (from what I've seen) not on individual houses.