Optimism and Pessimism While in Transit 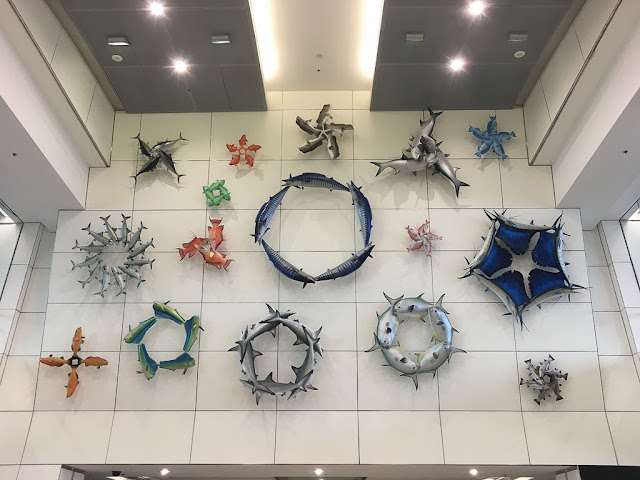 Well, here I am in wacky Florida, as you can tell by this artwork I photographed in the Miami airport. It's a darn good thing I took this picture, because it's the only one I have from my adventures so far and without it I'd have nothing to blog.

In fact, let's jazz it up with various permutations of the Waterlogue app: 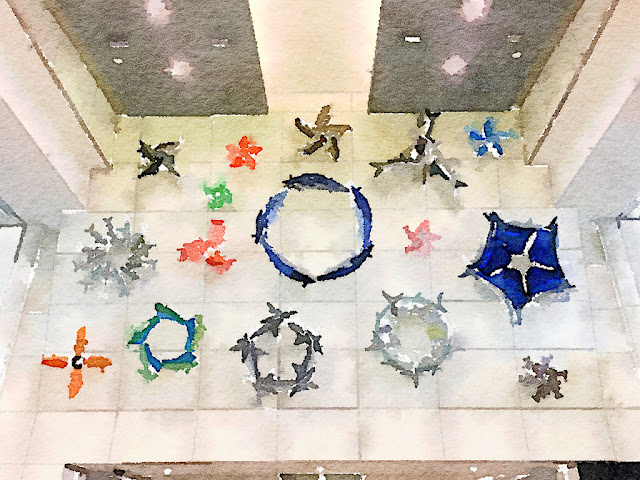 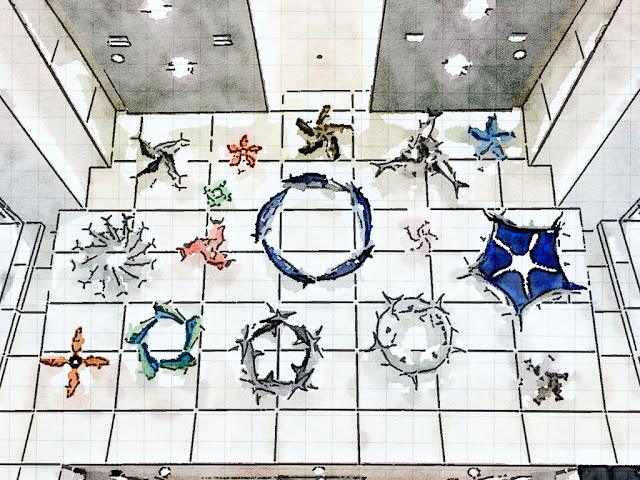 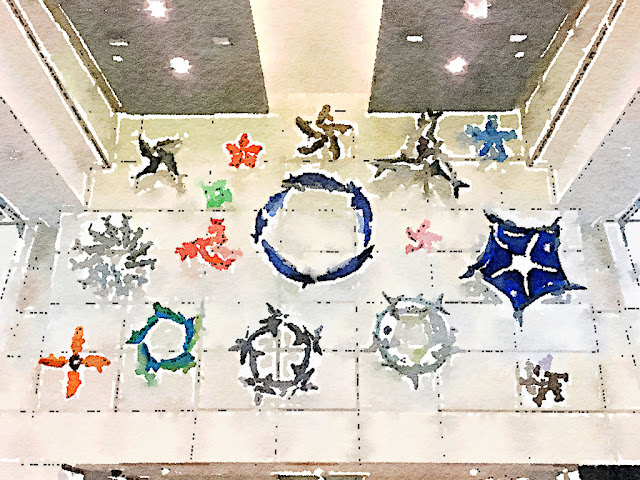 All my travel went pretty well, fortunately. On my flight to the states, I sat next to a very skinny man who face-timed with his lady friend all the way through cabin preparation, gate departure and taxiing to the runway, patently ignoring announcements from the cabin crew to turn off personal electronic devices. For some reason this really annoyed me. Why does he think he's special? I really thought he might just stay on that phone all the way through liftoff -- but no, he switched it off just in time for us to rumble down the runway.

Still, I decided I didn't like him, and I continued to silently not like him for the next nine hours.

I read a very entertaining book, "The Lost City of the Monkey God" by Douglas Preston, who was part of an expedition a few years ago to find a mythical ruined city in the jungles of Honduras. He'd written about this "lost city" for The New Yorker and other publications, and I really enjoyed his account of using modern technology (lasers!) as well as good old-fashioned insect-infested, machete-whacking exploration to reveal the jungle's secrets.

I also caught up on several New Yorkers, including one featuring an article about whether the world is better or worse off now than in previous years. I don't know about you, but I often read the news and conclude that everything's going to hell in a handbasket. But the article (citing several books and authors) points out that by many measurements, life is better now than it ever has been -- humans are better at fighting disease and hunger, crime is down, life spans are increasing and more and more people worldwide are living better lives. (That's not to say there aren't trouble spots, obviously, and big problems like climate change will be ongoing challenges.)

Reading the news can lead to despair because news -- usually -- is about what goes wrong. That's just the nature of the beast. So CNN or Fox News or the newspaper turns into a long list of daily missteps and mistakes and accidents and lies and deceit, and wouldn't that bring anyone down? Perhaps it is helpful to see things in the broader context -- the arc of the universe bending toward justice, even despite Donald Trump.

I still wonder about the resource consumption required to lift us all up, and the environmental damage we're seeing as a result. I'm not convinced it's sustainable in the long term, even with all our human ingenuity. But in any case, it was an interesting article.
Posted by Steve Reed at 11:30 AM

Nine hours in the air is useful for catching up on reading, even if the man sitting next to you is a total pain.
About all the daily bad news; I read an article recently suggesting 99% of the time nothing -apart from our daily routine - happens in our lives. We are just bombarded with bad news from other places. Some days I choose to shut off the bombardment.
I'm really looking forward to the usual Florida pics, the wackier the better...
Alphie

I agree about the daily news being so depressing especially with all the laws and agencies that Trump is undoing. Many days I have to change to a music station. How can people not believe in climate change and what will it take to convince them?

Just to help a bit, every week the Washington Post has a column titled The Optimist for a bit of positive news.

Have a good sleep day to get over your jet lag.

"I continued to silently not like him for the next nine hours."

That cracked me up.

I've heard that guy on NPR- the one who says that things aren't really that bad. I hope he's right.

you have every right in the world to dislike that man lol, I enjoyed the book of which you spoke,, I also am drawn to books about everything going to hell in handbasket storylines lol,, I don't know what that says about people, to be drawn to that subject, but I'm sure someone would have lots to say,

I suppose you are right about the human condition long term though I think we are taking two giant steps back over here. 9 hours is a long time to silently dislike someone.

Well, at least the offensive seat mate on the flight to Florida was skinny. It's murder when the guy next to you takes up all your air rights. I once had a seat in the emergency exit row and the guy next to me was so fat he had to use a seat belt extension, which disqualifies him from sitting in the emergency exit row, which I pointed out to the air hostess. In exchange, I got a tall French man who plays American blues, which the same air hostess tried to disqualify because he might not understand the emergency evacuation orders she might have to bark out in English. But luckily, he passed the field fluency test and we had a delightful four hours in the air.

But plane travel these days is usually awful, in one way or another.

There is something fishy about that artwork in the Miami airport! Sorry, I just had to say that. I would have been irritated by that guy too. I really don't understand why it's so hard for some people to follow the rules.

I wouldn't have liked that guy either. I'm guessing he probably voted for Trump. LOL! It's an interesting thing that the article trying to say how good things are is actually reporting the recipe for disaster. The planet is over-populated as it is. To measure the quality of "life" by how long humans are living is crazy. We're not the only living things on earth. What about the rest of life out there? How many species will we destroy? Your last paragraph said it well... it's not sustainable in the long term.

We humans are destroying our home at a faster and faster pace. And when the roof and sidewalks and ponds in a home are not taken care of, pretty soon the whole house begins to fall down and none of the neighbors can do anything about it. If only the owner had read the signs of destruction and taken heed.

That New Yorker article is intriguing, and has given me lots to chew on, and other sources to follow up - thanks for linking.

"Still, I decided I didn't like him, and I continued to silently not like him for the next nine hours." I chuckled guiltily when I read that; it's not unknown for me to dislike people silently, and for much longer :) It's when the dislike gets out through our mouths that it becomes problematic!

FACETIME JOHNNY... "Hi Honey! Can you hear me?...Yeah the flight was fine but there was this intellectual guy sitting next to me. He read a whole book! Can you believe it? And then he showed off some more by reading The New Yorker. I ain't never done read that thing. I felt like whacking that asshole. He didn't Facetime anybody or even text. What a weirdo!"

Welcome home! Florida awaits you. Will enjoy your thoughts on the state while you are here. As a Northern transplant, I both love it and am bewildered by it. It is absolutely wacky.