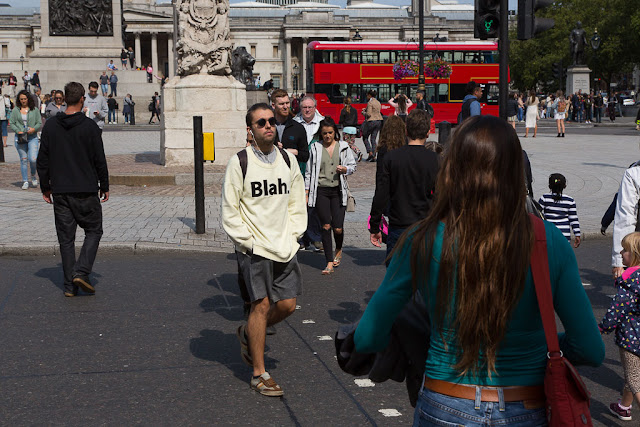 As I sit here with my coffee in the gray light of dawn, it's raining steadily outside. I don't think there's any nicer sound than an early morning rain, before the world wakes. I appreciate it all the more after our hot, dry summer.

Dave's sister Chris and her husband Gary leave this morning for Southampton and their cruise around Britain. Dave cooked for them last night -- fish en papillote and Eton mess -- and we watched the debut of the new season of "The Great British Bake-Off" so they could absorb some British television culture. (Is it a deliberately anti-Brexit statement that a French woman is participating in Bake-off this year? Hmmmm...)

I was just looking at the primary election results. Joe Arpaio is out in Arizona -- yay! And although I didn't vote for Andrew Gillum for Florida governor, it was really a toss-up in my mind between him and Gwen Graham, so I'm happy with his victory too. Onward to November!

(Photo: Trafalgar Square on Monday.)
Posted by Steve Reed at 6:25 AM