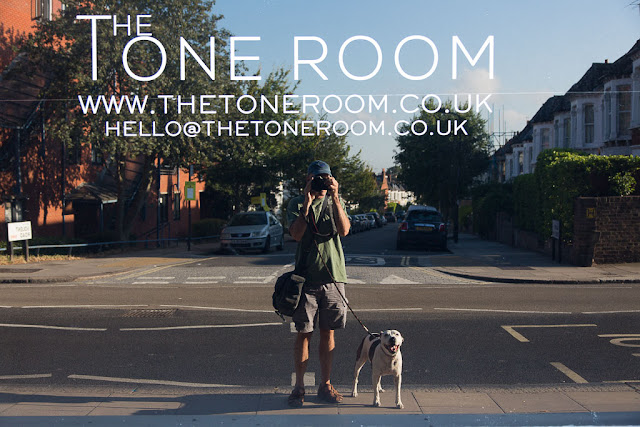 This business, a fitness studio in West Hampstead, has one of the most perfectly reflective windows I've seen in a while. Olga and I got a nice portrait out of it the other day when we walked past!

I haven't had too much trouble with jet lag after my Florida trip -- at least, not yet. Despite my overnight flight -- where I dozed but didn't really sleep much -- I stayed awake all day yesterday and then got a good solid night's sleep last night. I feel pretty normal this morning. After Vietnam, making the short hop to Florida seems like going next door to borrow a cup of sugar.

I did some laundry, cleaned the house a bit, and took the dog on her morning walk. She insisted on going down to Billy Fury Way and walking its graffitied length, and I noticed that a big derelict pub next to the overground station on Finchley Road has been demolished. I'm not sure when that happened. I turn my back for a second and the neighborhood changes! Anyway, it feels good to get back to routines, especially with work beginning tomorrow. Hard to believe it's that time already.

Did you see the essay by Stephen Miller's uncle in Politico? It directly addresses a question I've wondered about many times myself -- how could someone descended from immigrants and refugees be so hostile to immigration? "I have watched with dismay and increasing horror as my nephew, an educated man who is well aware of his heritage, has become the architect of immigration policies that repudiate the very foundation of our family’s life in this country," writes Miller's uncle, David Glosser. It's an excellent piece. I wonder if Miller will respond to it.

There was also a fascinating article in The New Yorker (I know, I say that all the time) about the Dutch criminal underground, and one crime family in particular. If, like me, you think Amsterdam is a land of quaint canals, bicycles and scrupulously law-abiding citizens, well -- think again. Like any large city it has its murderers, drug runners and other criminal elements!
Posted by Steve Reed at 6:54 AM

What a great outfit you were wearing in that quirky picture at the top. Do you have a personal dresser or do you research your style choices via the internet/style magazines?

I did indeed read that article by Stephen Miller's uncle and cheered loudly to myself. I don't think Stephen will care a bit; it seems like all he has wanted since he was making trouble in high school is notoriety and power. However, it was a powerful piece and might alert more people to the situation.

I did read the piece by David Glosser and then I saw him interviewed by Andrea Mitchell and I was so impressed with him. A sober serious take on the damage and evil his nephew is doing in our name. I wanted everyone to read him too. It seemed like a moment of sanity in the midst of the surreal madness.

It was on the radio this morning about how lots of pubs are closing down. Not suprising when you see how much a pint is, I'd love to go out more for a half and a packet of crisps but begrudge the price.
Briony
x

That picture of you and Olga shot in a window's reflection may be my favorite of all of your photos ever.
I don't have the slightest idea what to say about Stephen Miller. I read the article by his uncle and it only makes me more sure than ever that Miller is a sociopath who has managed to get himself into a place of great influence and authority, not unlike Hitler, and he scares the hell out of me.

Thanks for the links. I've read a book review about the Dutch woman & that Stephen Miller is quite a piece of work isn't he?
It's not unknown here for the previous generation of migrants to be highly critical of the latest arrivals. They usually bleat about how they didn't get things handed to them on a plate and talk back radio is their preferred medium for airing their disgruntlement.
Whingers! In the same class as those, usually of Anglo/European
background who feel, for whatever reason, they are not getting their entitlements and whose catch-cry is 'I worked hard and paid my taxes.' Not so in this day and age when accountants, quite legally, can reduce the tax payments to next to nothing if you are in business.
I'll stop there...
Alphie

The question you ask about Stephen Miller could be asked about many others. There seems to be some huge disconnect somewhere.

Is that the prison shirt from the Goodwill?
David Glosser also said in an interview, that much of Stephen Miller's extended family does not care for him. Thanksgivings must be very awkward.

That is the best reflection photo I've ever seen. Truly beautiful. I read the piece by David Glosser and was very moved by it. It's important for people to speak out especially family and most especially from such a thoughtful and personal perspective. Stephen Miller's mother should take him outside and give him a good zetz (https://www.urbandictionary.com/define.php?term=Zetz)! LOL!

I hadn't seen that article about Stephen Miller so I followed your link and read it. It makes me also wonder if Miller will respond and what he could possibly say. I also read a good editorial in the NY Times by Frank Bruni called The Revenge of the Lesser Trumps. He had an interesting take on the current battle of wits (or should I say 'nitwits') going on right now.
I love the photo today. That is a perfect reflection. So perfect that I was trying to figure out how you did it before I read about it.

"The Dutch culture of permissiveness is sometimes said to stem not merely from a liberal spirit of tolerance but also from clear-eyed pragmatism: what is the sense in prohibiting prostitution if doing so won’t stop it?"- wow, what a story, and the quote certainly explains some shenanigans we witnessed in Amsterdam!
Nail biting story!
Wim is cut from the same cloth as tRUMP, I do believe
Wonderful photo of you and the girl, the window is impossibly clean!
Glad you are back home!

I read a comment by an educated senior citizen woman recently that stated Donald Trump obviously is very smart because how could he have achieved so much success in business if he wasn't. It just makes one wonder.