Mexican Wrestlers in the Men's Room 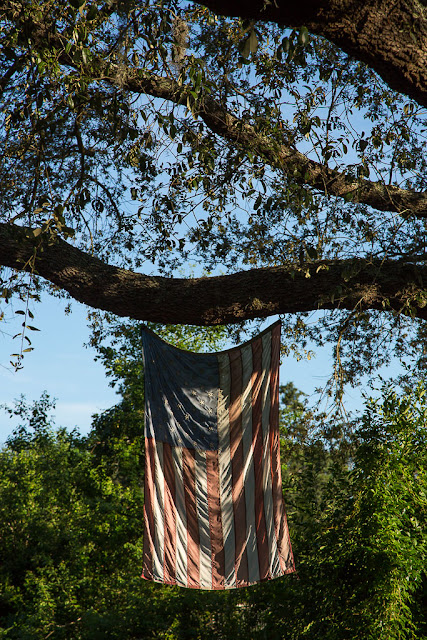 I suppose it's inevitable that I join the national chorus of people complaining about the heat. But August and Florida have never been a good combination, so I'm not surprised. We're pretty limited in what we can do outdoors in this kind of weather -- we take little early-morning walks around the neighborhood that leave us feeling as limp and faded as this flag. 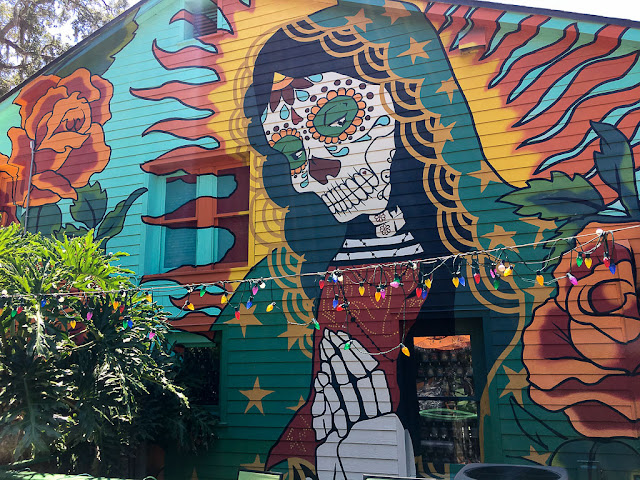 My brother, mom and I went to lunch yesterday at a taco place near Jacksonville Beach with this amazing mural on the side of the building. I got a taco salad because I feel like I haven't had any vegetables in a couple of days, but of course a taco salad isn't exactly nutritious. There was romaine lettuce and a few tomatoes, and I got some "Mexican street corn" on the side -- but it had a cheese topping.

So basically, I'm living a life of no exercise and dubiously nutritious food. Welcome to America! 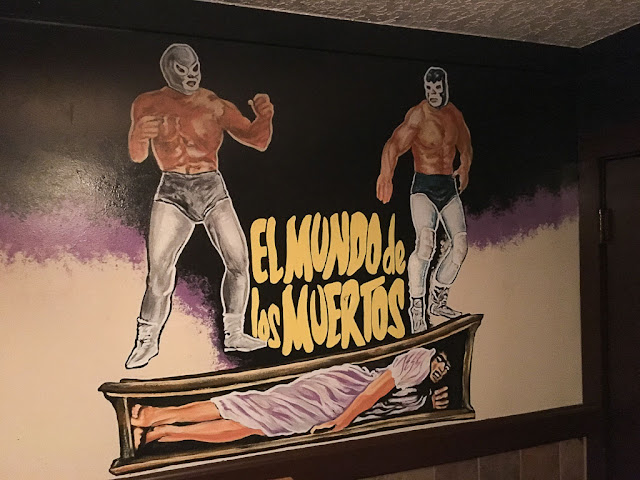 The bathrooms in the taco restaurant were painted with images of Mexican wrestlers. Or at least the men's room was. I can't vouch for what was going on in the women's. I should have asked my mom. 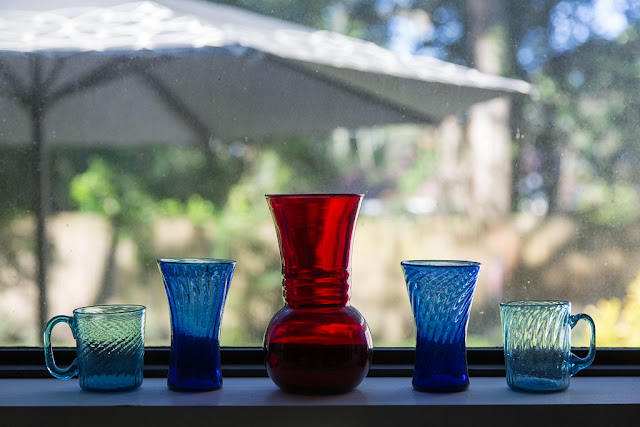 I'm sure you don't remember -- and why would you? -- but this glassware was the subject of one of the first photos that I took with my first serious camera back in 1983. It used to belong to my grandmother, and then I owned it for several years, and now my brother keeps it on a windowsill in his kitchen. The blue pieces are very lightweight "carnival glass" that I think came from Cape Cod back in the 1930s. The red one may have come from there, too, but it's better quality Anchor-Hocking in a color called ruby red -- vases like that are omnipresent on eBay, or at least were the last time I looked.

Last night we started out watching more Harry Potter, until my brother basically demanded that my niece turn it off so we could watch something else. (We switched to an old episode of "Miami Vice.") My older niece seems to be going through a Harry Potter phase at the moment -- she's very artistic, and she's been making wands and spell books and writing quills all sorts of Potteresque items. She still has a thing for dragons, too, and she uses the iPad to draw dragons and gryphons and other mythical beasts sitting in the palm of her hand. It's pretty cool -- I watched her produce one yesterday. She can work that iPad like nobody's business, and she's very imaginative in determining what the beasts should look like (why not a snow leopard?) and what they should be doing (blowing smoke?).

Today I'm moving from my brother's to my mom's, where I'll stay the next few nights on her couch. I don't want to stay too long in any one place and wear out my welcome! At least I had the good sense to replace the wine I drank at my brother's, which as far as I'm concerned is pretty much the cardinal rule of visiting anyone.
Posted by Steve Reed at 10:46 AM