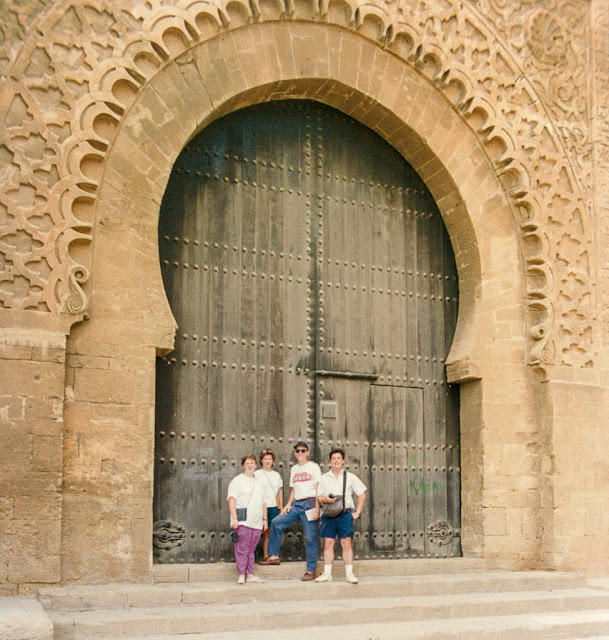 While Dave and I were in Vietnam, a postcard came to the house from the Royal Mail, saying that they were holding a special letter for me that required a signature. Of course I didn't get the card until we got home on Sunday morning, and I promptly arranged redelivery of the letter for Tuesday.

I wasn't sure what it could be -- visions of some forgotten delinquent bill or mysterious legal proceeding were dancing in my head -- but it was actually a nice surprise. My friend Mark from my years in the U.S. Peace Corps (1992-94) sent me a flash drive full of photos he'd taken during our time as volunteers in Morocco.

Apparently he sent similar drives to several people from his college and Peace Corps years. I promptly sat down and scrolled through the photos, and got a kick out of walking down memory lane. 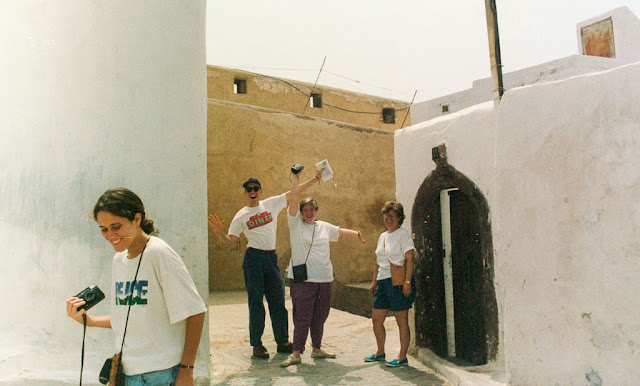 These particular pictures were taken on August 2, 1992, exactly 26 years ago today. I know this because I wrote about this outing in my journal the next morning:

"Rabat was really fun yesterday. The pollution cleared out and we had a nice, cool sea breeze, and the skies were still slightly gray so the sun wasn't really intense. I went downtown and met up with Kelly and Liz and we went to Mohammed V's mausoleum -- it was beautiful! So ornate and well-kept -- obviously a prime tourist attraction. It was on a peak overlooking the river and the view was really sweeping -- all of Salé, and the river out to the sea. Then we had lunch at Cafe Milano (more pizza!) and walked down toward the medina. We met up with Jo and Mark, and they went with us all through the medina and to the kasbah, the old fortification on the river. Again, a great view -- this time of the beach, which was really jammed with people. We sat at a cafe where I drank water and then shopped the medina for a while. I really like the medina -- it's old, crumbling and dirty but so Moroccan, unlike the French parts of the capital. I didn't really buy anything but I explored a lot."

Above, from left to right: Jo, Liz, me, Kelly. I think that's the kasbah wall behind us, but I'm not sure. In the top photo, which apparently Liz took with Mark's camera, you can see Mark standing on the right. 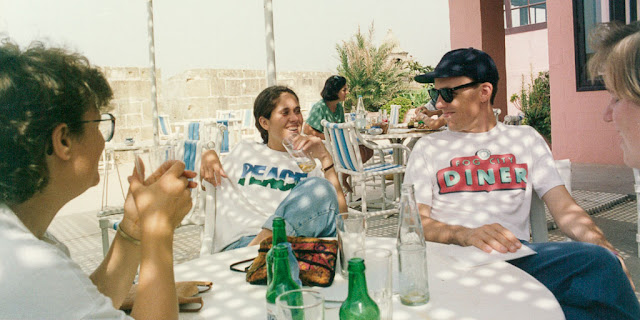 This must be the cafe where I drank water. Everyone else seems to be having a beer. What a wet blanket I was!

(By the way, in case you're wondering, here's the backstory on the t-shirt I'm wearing. The Fog City Diner is in San Francisco, and was featured in a national TV commercial for Visa in 1990. When I went to San Fran the following year, with my friend Arthur, I made sure we ate there. From my journal, June 1991: "That night we went to the Fog City Diner, which I desperately wanted to go to ever since I saw it in a Master Card (sic) commercial. I even suspended my vegetarian vows, and ordered yellow-tail jack at the restaurant. For some reason, though, I was kind of down that night. I was really getting crushed by the thought of returning to work. And the restaurant wasn't as ritzy as I'd hoped -- I wanted a dressy place but it was very casual.")

Anyway, I got a kick out of seeing Mark's photos, most of which I don't remember seeing before. It's also cool to be able to link them to my journal -- illustrating the benefits of putting the journals online and thus making the content searchable. That long project, of transcribing them all to a private blog, is very close to finished. I think I may get it done this week!
Posted by Steve Reed at 6:22 AM

Twenty six years ago... for you it's half a lifetime back. I guess you and your Peace Corps chums were all on an undercover mission run by the CIA but what was your cover story?

I had forgotten, until I read Mr. Pudding's comment, that the Peace Corps was always dogged by rumors of being a front for the CIA. The idea is hilarious to me, having been a Peace Corps Volunteer in Niger, West Africa. Why on earth would anyone want to spy on THAT place? It might not be the shit hole that der Trump said it was, but it's very, very close.

I visited a Peace Corps volunteer in her village about 20 miles outside of Marrakesh the last time I was in Morocco, about five years ago. SHE HAD A PHONE!!! But I like visiting Peace Corps Volunteers when I go to a developing country because they usually know the lay of the land very well. All you have to do is bring a bottle of booze from the Duty Free.

But it looks as if you had a fun crew in PCMorocco. That's so thoughtful of your Friend Mark to bring back old memories. Snail mail is the best.

What a terrific gift!
It's so cool that you were in the Peace Corps.
You WERE a wet blanket, Steve. What was up with that? I love how you even mentioned in your journal that you drank water. You were a good boy, weren't you?
I remember when I was a good girl.
Those days are gone forever.

how cool! what a great surprise. I would love to go to Morocco.

I would think that more and more you see the value of a good journal. Putting photos and journal together makes experiences much more memorable.

I love knowing that you were in the Peace Corps. I sometimes wish I had been brave and independent enough to do such a thing when I was younger. One of my most favorite people I knew when I was a young adult volunteered when she was in her 60s and went to Belize. It's wonderful that Mark sent you those photos. A lovely reminder of a fine time in your past.

What a nice surprise! I love the photos and the stories. What a fantastic life experience you had!

I wonder if it was the Peace Corps experience that cued the wanderlust in you or if you always had it?

I don't think drinking water made you a wet blanket at all. Not everyone likes beer and in a hot climate isn't it better to drink a lot of water rather than alcohol anyway? :)

What a nice thing for your friend to send you. Pictures are moments caught in time and seeing new ones of bygone times is a treat.

I see hair under that ball cap! lol

It was fun to see the pictures of your time in the Peace Corp. The fact that you wrote about these exact days in your journal makes it all even more special.

What fun! That Liz looks like I did in Zambia - big glasses and all :)

The photos are a great reward for the journal transcriptions! How very cool to be able to marry the two streams of memory, visual and written.