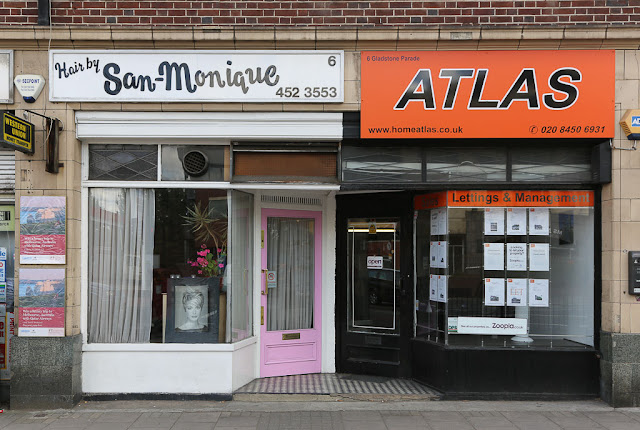 Six years ago, in August 2012, I walked past this pair of shopfronts up in Cricklewood. I liked Hair by San-Monique, with its retro beauty shop look and coordinating pink flowers and front door, so I took the photo above.

Well, I came across the same shops again the other day, and was saddened to see they now look like this: 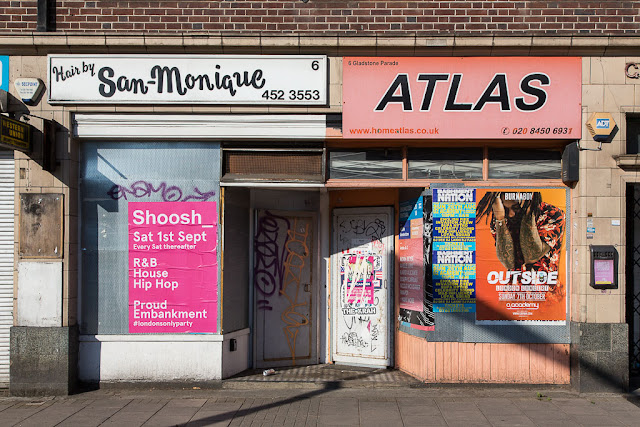 Apparently that whole strip of storefronts has been emptied in preparation for demolition and rebuilding. Some residents aren't happy about it. Too bad San-Monique is no more. According to that linked newspaper article, it had been there for 50 years!

I finally figured out how to edit and splice together the fox videos I wrote about yesterday. I had to buy a video conversion program to change the format before I could edit them in iMovie, and weirdly, the conversion stripped out the date and time stamps.

So here's an edited version, for my truly dedicated fox fans, that shows more fox and less dead air! There are four clips, taken between 9:45 p.m. Wednesday and 4:30 a.m. Thursday, in that video.

I tried to film the fox again last night in a different part of the garden and got nada. I guess he/she isn't always around.

Work was fine yesterday. It's good to see everybody again, and I got to meet our new middle school librarian. Weirdly, my desk, which used to be a gigantic semicircular Starship Enterprise kind of thing, has been cut in half, and fifty percent of it was taken away and demolished. The bosses want to create more flexible space, I guess. I'm not convinced this is a good idea, because we stored a lot of stuff behind that desk and my colleagues did occasionally sit there, behind the now-demolished portion. But I'm rolling with it!

We had some drama when the workers were tearing the old desk apart and a piece of it crashed down on one guy's head. He had a gash that required medical attention, so we called the school nurses and eventually sent him to the hospital. The desk strikes back!
Posted by Steve Reed at 6:27 AM

Always a good idea to try and roll with the new when you can, something that still gives me a bit of a hard time.

That skinny fox's eyes are like miniature headlights. It must make getting around at night much easier. I wish I could do that with my eyes.

What?! Did they literally just cut off half the desk? That must have been a bit of a shock. How could that make things more flexible? I'm confused.
I'm sure you'll adjust.
I do like your little fox.

Now I'm betting that the camera will come up with some surprises that come to your garden!

Really great editing of those videos. Interesting to watch how it comes and goes into and out of your yard. Smart creatures, they are. That's pretty wild about the desk being cut in half and someone getting injured. Yikes.

For a moment there, that fox got up close and personal with the camera. It's sad about the shops you photographed especially since that one place has been there so long.

Progress at the expense of area residents, I'd say. Undoubtedly the new flats will be too expensive for any of them. And your DESK! Do planners have no pity? At least your fox seems to be doing well. Looks to me like a female who has given birth fairly recently. If so, I wonder where her little ones are.

I used to just roll with things fairly well, but now I'm old & set in my ways & it would take me a while to come to terms with half of my desk being missing. Ha! I'll be interested to see how it works out.

Sad about the shops too. I wrote a poem about change when I graduated from college: "Life is so change, rush fizzle bang, and I am so there in the midst." Very twee - ha!

That fox looks so kitty-ish up close, but so dog-ish in profile. Very neat to see him or her checking out the same spots over and over. (I can identify, having done that myself, standing in front of the open fridge, hoping something good has appeared . . .)

They took away half of your Enterprise desk? How are you supposed to work?! Personally I like having a barrier between me and germy people - lol