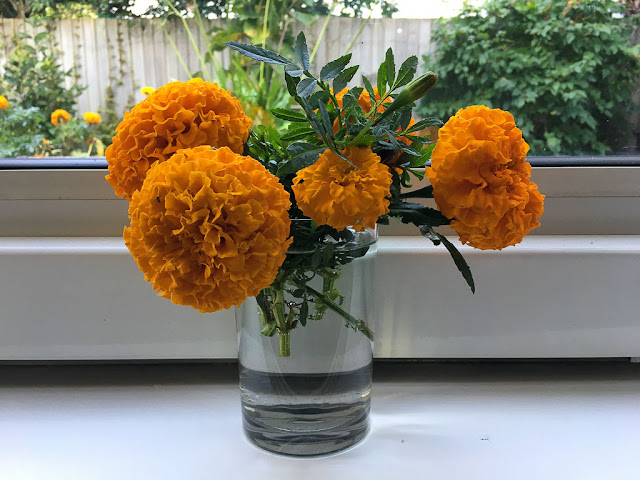 I did not pick these marigolds. Instead, they were picked for me, by a super-destructive rampaging squirrel.

Just a few days ago I was admiring our big African marigold, which I bought for Dave earlier this summer. It's been a productive bloomer, and although it was damaged by snails in its original place on our front porch, I moved it to our patio table and it had regenerated beautifully and put on about ten flowers.

And then, yesterday morning -- squirrel.

Now the plant is about half its original size. But on the bright side, we have a nice bouquet for the living room. 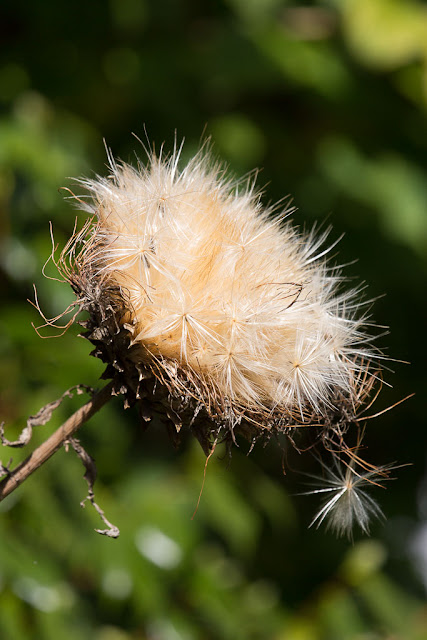 I was pretty busy in the garden yesterday. I mowed the grass and did some trimming, and then lay on a blanket with Olga reading "Oliver Twist." (I was reading, not Olga.) That counts as being busy in the garden, right?

Our cardoons have opened into these gigantic seed-heads, which I don't remember seeing before. A few days ago I noticed big dandelion-like seeds floating around and I couldn't figure out where they were coming from. Yesterday I finally spotted the source.

I hope they don't take root, because cardoons are huge plants and volunteers might not be easy to accommodate.

Olga, meanwhile, had her follow-up vet appointment yesterday. It turns out she can't have her stitches removed yet, because she's been licking the sutured skin and it's inflamed. She's now on a course of antibiotics and has to wear an inflatable donut around her neck. 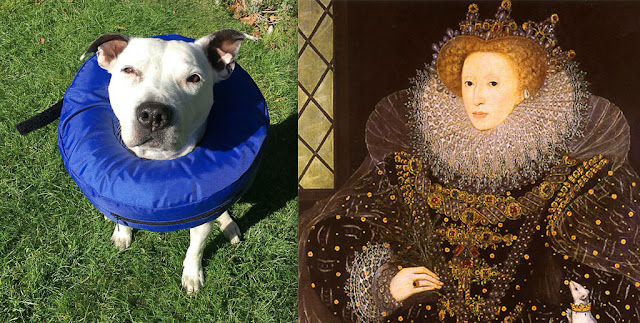 We think it looks very Tudor. As I said on Facebook, "Do you think Queen Elizabeth I wore those collars to keep her from gnawing on her stitches?"

Olga doesn't love it, but she seems resigned to it, and hopefully it's only for a few days. I removed it yesterday for a long walk to the Clitterhouse Playing Fields -- an open space where she could run free, but not be tempted to plunge through thickets of potentially stitch-ripping underbrush in pursuit of squirrels. She doesn't lick while she's walking. 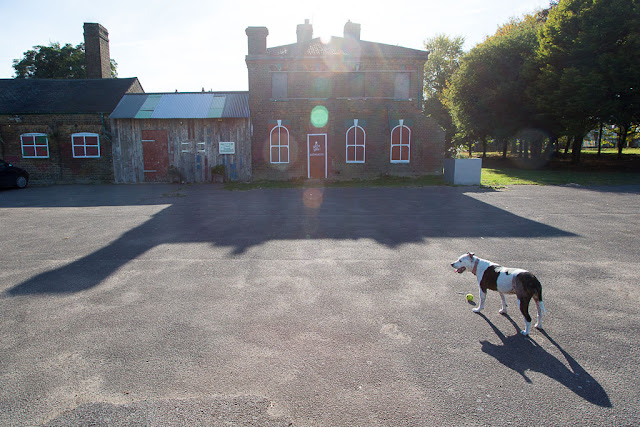 This means we'll have to come home to let her out at lunchtime for at least another three workdays. She's due for another vet appointment on Wednesday evening, and hopefully after that she can shed the donut and resume daily outings with her dog walker.
Posted by Steve Reed at 7:09 AM

I have seen a few of those doughnut things on dogs recently. I guess it is probably more comfortable than the old plastic " lampshade" on the head to stop them getting at stitches etc?

Comparing your pooch with one of England's greatest monarchs is probably treasonous. You may end up in irons in The Tower of London or even worse - on an aeroplane (not "airplane") headed back to Trumpland.

The Tudor collar is very regal. I hope Olga doesn't mind it too much.

Sometimes it's hard to be a dog.
Those marigolds are amazing.

Squirrels are a big nuisance. About all we can do is get mad at them.

Beautiful marigolds! Hope Olga is all healed and well for the next vet visit, and no more donut. Although, she is incredibly cute and regal in the inflatable collar.

Olga DOES resemble Lizzy One!

Those marigolds are gorgeous! Poor Olga....cursed to wear the donut. I love the comparison with Elizabeth. However it made my neck itch just looking at it.

Poor Olga. But the marigolds are such a rich shade of burnt gold. Gorgeous.

The bouquet is beautiful, everything dies, may as well bring them in to cheer up the house, I reckon. Olga does look regal in her comfy doughnut. Dogs can't help but lick, especially if bored or self soothing,

"We are not amused" comes to mind at Olga's expression, never mind that the phrase is usually attributed to a different queen :) That collar looks a lot more comfortable than the cones, even though I'm sure it's still not fun.

The marigolds are gorgeous. Dare I say thanks to the squirrel? lol

Mercy, that last comment of mine wasn't clear. I meant I was glad to see the wonderful bouquet, NOT thankful the squirrel tore up your plants! I have to start being more careful with words.