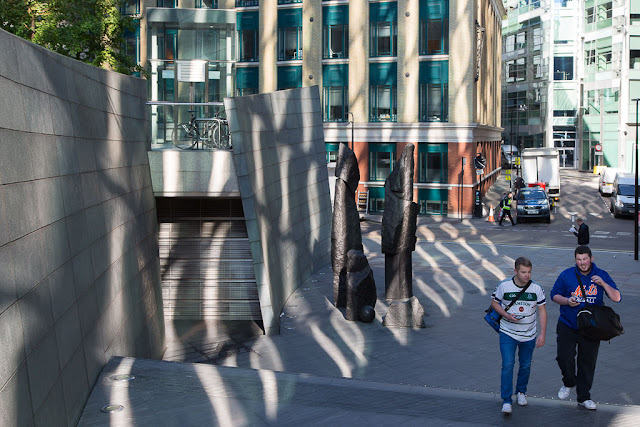 I spent all day yesterday out and about in London. It's been so long since I've had a wander with my camera that didn't also involve walking the dog or sticking to my neighborhood. I don't know why I've been in such a rut lately, but I should get out more often. It felt great to see some new sights!

I took the tube to Liverpool Street and walked west, with my eventual goal being the Museum of London. The morning was cool and sunny, and I found no shortage of photo opportunities as I circled the Barbican and the massive CityPoint complex near Moorgate.

The museum has a photography exhibit on at the moment called "London Nights," featuring numerous photographers and their efforts to capture the nocturnal spirit of the city from the Victorian era to the present day. It was a fascinating show -- standouts for me were Nick Turpin's "Through a Glass Darkly" series, in which he took incredible portraits of bus passengers through the steamy winter windows, and Philipp Ebeling's "London Ends" project focusing on suburbia. I bought both of their books, because that's what I desperately need -- more photography books. (NOT.)

I killed a couple of hours at the exhibit -- and why does the cafe at the Museum of London have a club sandwich called the New Yorker, I wonder, when there's no sandwich named after London (or anywhere else, for that matter)?

Anyway, I then kept walking through Smithfield and Farringdon, stocking up on photos all the way. 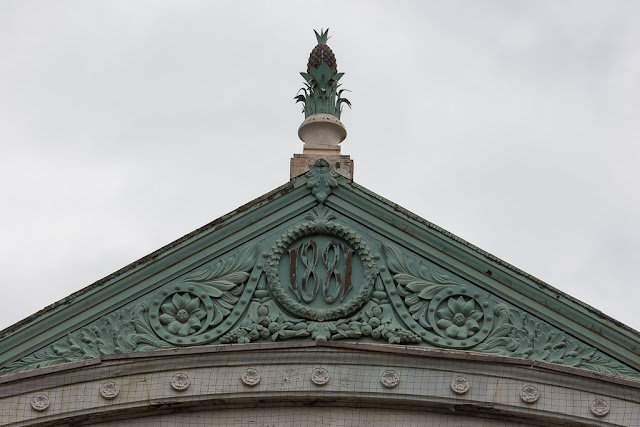 Did you know there's a big pineapple on the roof of the old Smithfield meat market? I didn't either -- but there it is. I know it's an old symbol of hospitality, but in this context it seems more like an advertisement for Hawaiian chicken or luau ham.

I got back home around 3 p.m. to find Olga literally vibrating with anticipation, she was so ready for a walk. After downloading my photos I took her to Fortune Green and the cemetery, and for some stupid reason I did exactly what I was careful not to do the day before -- I let her off her lead to chase squirrels through the underbrush. She did indeed damage her stitches, though not badly. I'm a terrible parent.
Posted by Steve Reed at 7:30 AM