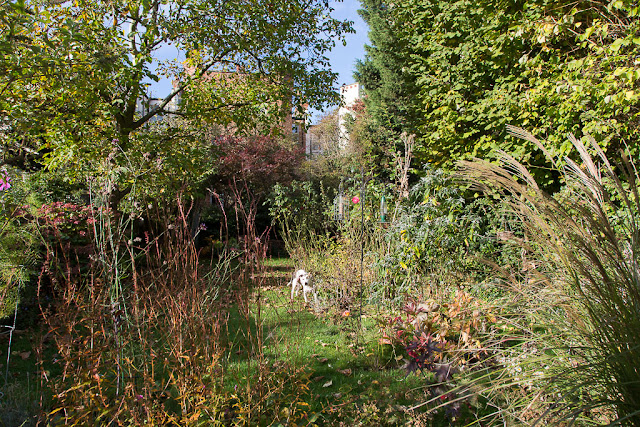 Here's our fall garden, with the birdbath full of leaves and all the colors slowly running to yellow and gold. We haven't tried to clean it up much -- it still looks too nice, and supposedly, leaving some plants to go to seed (like the teasel, the tall brown plant to the right of Olga) is good for the birds. I haven't seen a bird on that teasel, but maybe I'm just not looking at the right time. We have one bright pink rose, still standing out like a stoplight.

British Summer Time ended this morning, so our clocks have fallen back. As I told Dave last night, "That just means I'll wake up at 4:30 rather than 5:30," and I was pretty much correct. But at least I could lie in bed and not worry about having to be anywhere.

Yesterday Dave and I went to see "A Star Is Born" with my free cinema ticket from my health insurance. (I'm realizing that until I get Dave exercising and earning his own cinema tickets, this benefit is actually going to cost us money, because although I get in free he has to pay, and if I didn't have a free ticket we might not be going to the movies at all.) Anyway, I thought it was so-so. It seemed a bit long (never a good sign) and somehow the characters and the relationships never quite took flight. Also, while I like Lady Gaga as a person and I think she did a great job as an actress, I'm not crazy about her voice. It seems too high up in her head. Obviously I'm no expert on this and a lot of people love how she sings, but I just kept thinking, she's not Streisand.

I think Dave and I are going to rent the 1976 version today and watch it for comparison's sake. I've never seen the Judy Garland version, or the even earlier one, so maybe when Dave goes out of town later this week I'll watch those. (I think Dave will be done with "A Star Is Born" after today!)

We went to dinner last night at a vegan restaurant in Primrose Hill called Manna. It was an early birthday dinner for me, because Dave will be gone on my actual birthday, this coming Friday. He's got a school trip. Lousy timing, but oh well!
Posted by Steve Reed at 6:42 AM