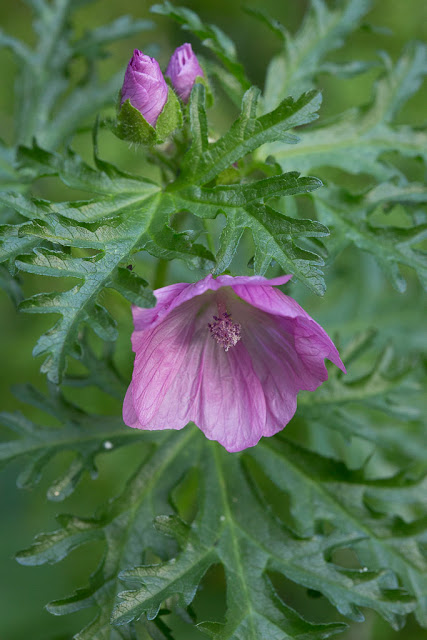 Remember those wildflower seeds I planted in early spring? The ones that slumbered dormant in the chilly ground until I finally planted a second batch, which were equally unproductive? The ones we finally gave up on entirely before planting fully grown comfrey and cow parsley in their place?

Well, I never wrote about it, but we did finally get a few peculiar-looking sprouts in the wildflower garden. They never did much until this week, when one of them rewarded us with some completely unexpected flowers! It's a musk mallow, and I'm assuming it came from the seeds I planted because we don't have them anywhere else in the garden -- but who knows. I suppose it could just be a volunteer, too.

I had a busy day yesterday. Dave went to school to finish recording student auditions for an honor band competition, and I spent the morning cleaning the house and doing laundry and trimming some stuff in the garden. We've tried to leave the garden alone, even though everything's gone to seed, because plants like the teasel and cardoon and thistles and hydrangeas are interesting when they go all brown and dry and rattly. But finally yesterday I had to gently tidy up, trimming some uninteresting stragglers, because it was getting hard to walk around out there in places.

I'm reading "Boy Erased," a memoir about a boy from a fundamentalist religious family whose parents send him for gay conversion therapy after he comes out to them. Apparently it's being made into a movie, which is probably why we just got it in the library. It's a really good read, but all the Jesus-speak makes me tired and somewhat depressed. I can only take so much.

We're off school tomorrow and Tuesday for October break, and today we'll be boarding a train with Olga, bound for Salisbury. Yes, yes, I know -- beware the Novichok. That's what everyone's been telling me, in a mostly joking tone. I'll do my best not to touch any suspicious doorknobs.
Posted by Steve Reed at 7:57 AM