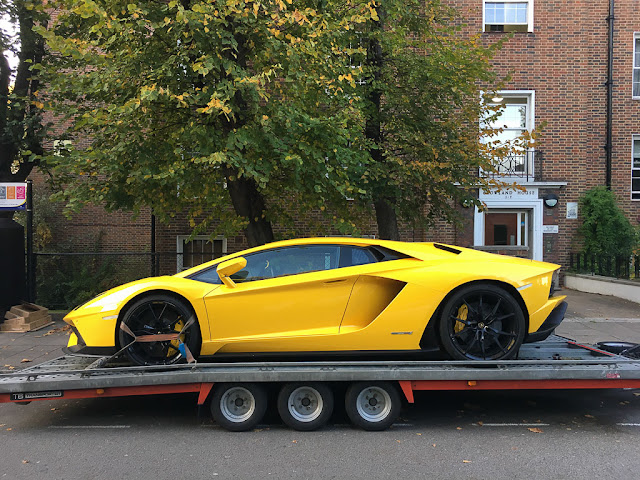 Here are some more random photos from recent weeks, this time with a distinctly autumnal flavor!

I spotted this Lamborghini on my walk home from work. I'm not sure whether it's getting towed or merely transported. It's not quite the same as the lime-green Lamborghini I often see near school. My brother would probably be able to tell us the exact year and model of both of these cars, but all I can say is they stand out! 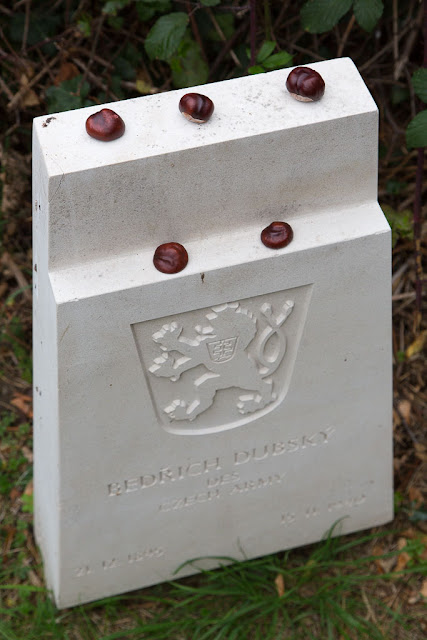 While walking in the cemetery with Olga I came across this gravestone decorated with chestnuts. We saw this same phenomenon, on the same gravestone, last year. Someone must be sending a message to a departed loved one. 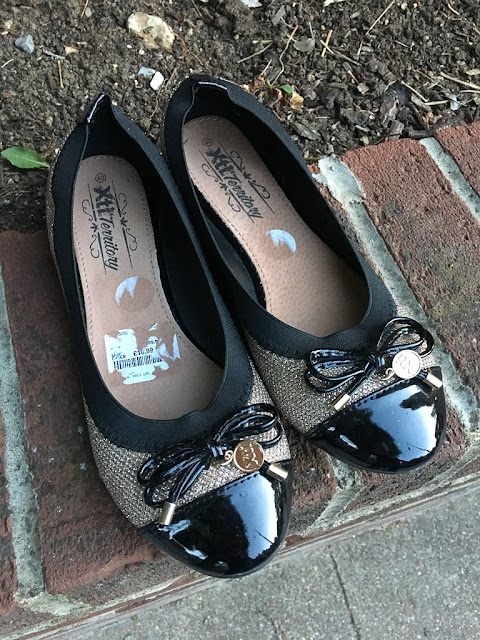 Free shoes! Hardly my style, though. 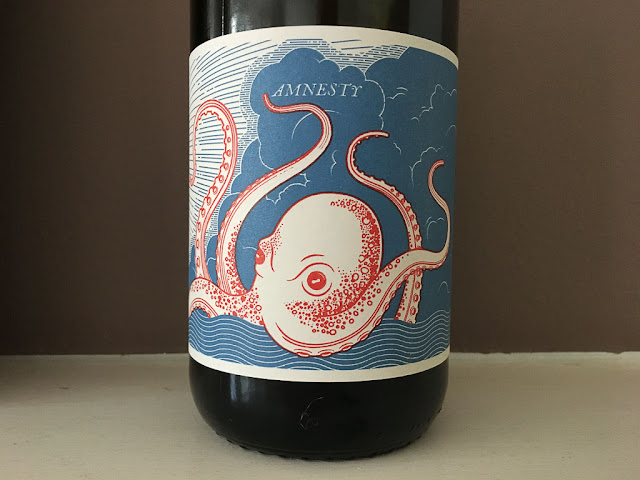 A very cool wine label from a recent bottle of South African red. It would make a great poster. 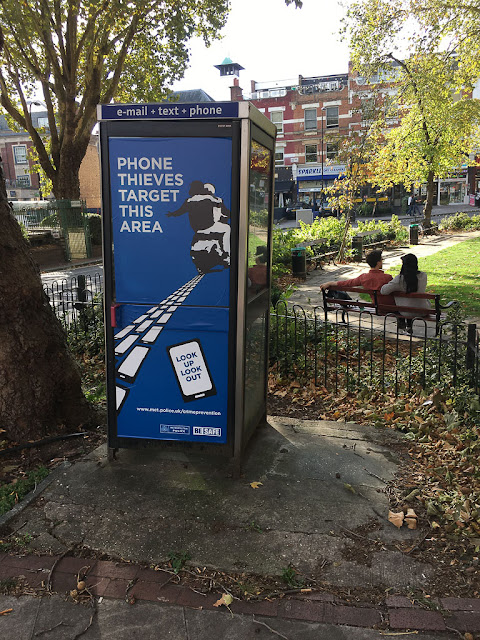 A warning ad near West End Green. London has had a rash of moped crime in recent years, in which thieves zip past on a (usually stolen) moped or motorbike and grab people's iPhones from their hands, or even expensive watches from their wrists. It became such a common problem that the police developed tactics specifically to fight it, and last I saw, moped crime numbers were down. Still, it's a good idea not to carry your phone in the open on a London street. I keep mine in my pocket. 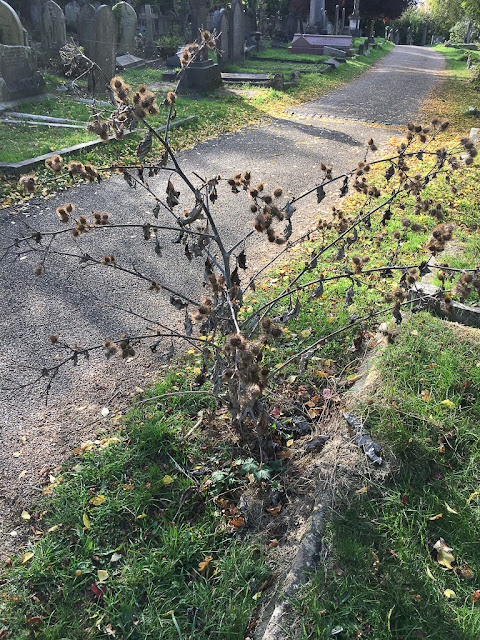 Remember that big burdock plant at the cemetery? Well, it's gone to seed. I should really pick a couple and try to grow them. Burdock makes an interesting plant. The spiny adhesive seeds inspired the creation of Velcro, or so I've read. 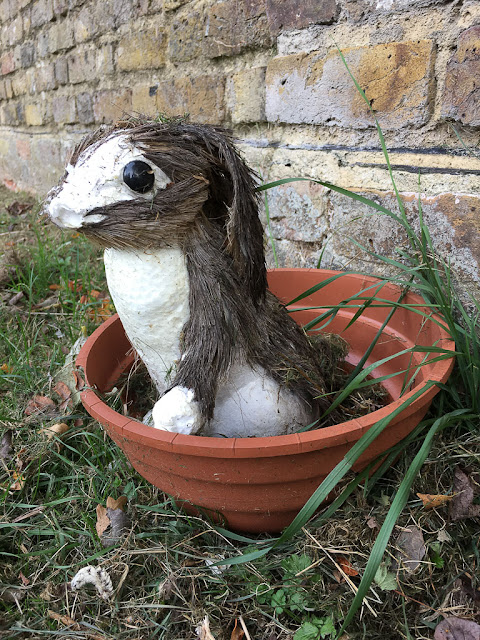 Finally, a rather creepy artificial critter at the cemetery, obviously well-weathered. The cemetery has plenty of real critters, so I'm not sure why someone felt the need to import this one!
Posted by Steve Reed at 6:33 AM

Those " spiny adhesive seeds" are the very devil to get out of a schnauzer's facial hair !!

Chestnuts are supposed to keep spiders at bay, but it hasn't worked in my bedroom I have to say!

I wonder if there are conkers on the grave of William the Conqueror?

Bedrich Dubsky was a Czech archaeologist. No doubt he was Jewish. Jews traditionally put small round stones on their loved ones graves instead of flowers. I have read that if the small stones are not available, they often use chestnuts.

Actually, must be a difference Bedrich Dubsky. Find a grave has yours at https://www.findagrave.com/memorial/154294798

I especially love the chestnuts on the gravestone.

Bedrich must have loved chestnuts though Colette's first comment did come to mind when I first saw the picture. and yes, a very cool wine bottle label.

Now I've never heard of moped thieves. I guess our population is not dense enough. We mostly have indoor malls.

The chestnuts on the gravestone are so poignant to me - I love that this person is still being remembered. The wine label reminds me that there's a show about the Kraken on Sunday night - but it's at 10:00 so I'll have to pass. Darn it. I've read some very weird British novels that involved the Kraken. Ha!

Quite the contrast between the couple sitting peacefully on the bench and the ominous warning in back of them.

Here we treat burdock as a weed, and an inconvenient one at that, especially for animals, although they'll stick to a person's hair and clothing, too. It's neat that you want to grow them!

Frances: I can imagine!

YP: Was he, in fact, William the Conkerer?

Colette: Aha! I did not know that, about the stones and the chestnuts. That explains a lot! Even if he's not the archaeologist, it's interesting that there were two men with that name, isn't it?

Ms Moon: There's something touching about them, isn't there? Especially that they appear year after year.

Robin: Me too! I seriously want to hang it on my wall.

Red: Where you live, moped thieves would use up way too much fuel getting from one victim to the next!

Bug: Have you?! We must be reading different British novels. LOL!

Marty: Yeah, I was struck by that too at the time.

Jenny-O: Well, it's a weed here too, but I think they're very cool looking plants.

John: Yes, I hadn't heard of that (or if I had, I'd forgotten) until Colette mentioned it above. I'm sure that's what's going on here.