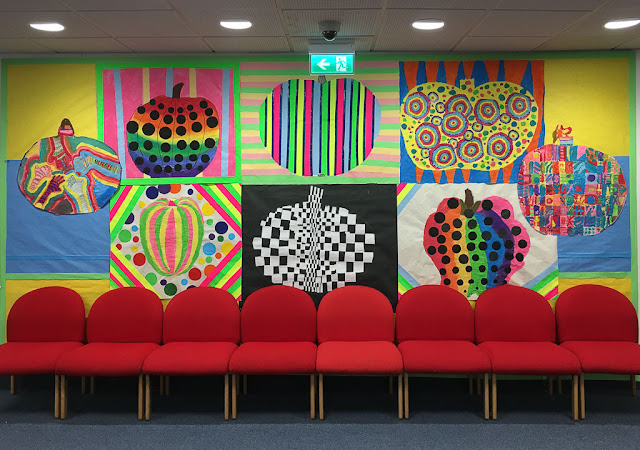 The younger kids in our school went all-out with their autumn decor this year, giving us a wall of psychedelic pumpkins. I think they look better than the standard orange-and-black Halloween color scheme, don't you?

But there's plenty of that around, too: 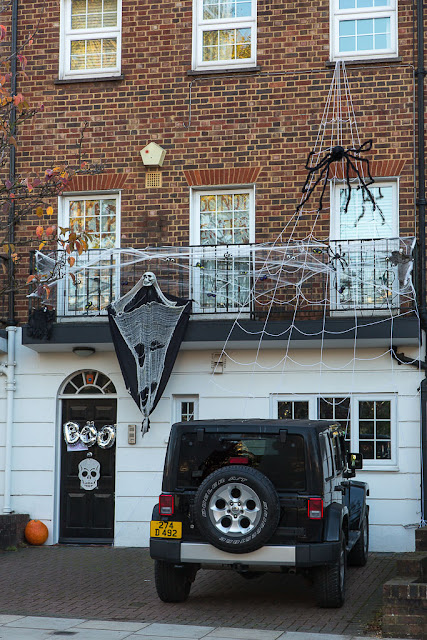 There seem to be two schools of thought about Halloween in Britain. One is embodied by the traditionalists who eschew Halloween as an American import and argue that Britain should save its fall celebratory energy for Bonfire Night (which is coming up on Nov. 5). Rob Rinder, in the Evening Standard, moaned about Halloween in one of his recent columns and said trick-or-treaters in his neighborhood badger him not for candy but money. (Definitely not an American Halloween tradition!) 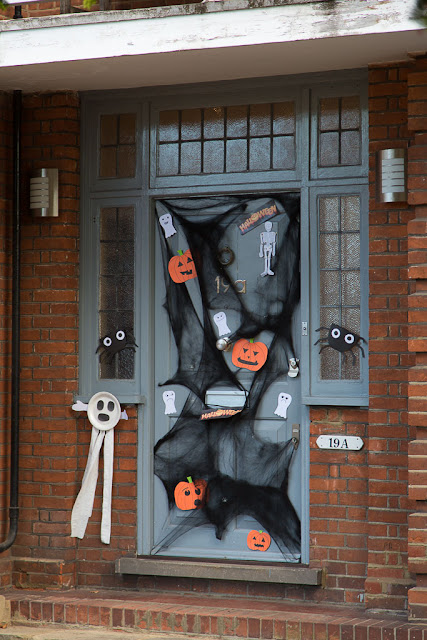 Others take it in stride. The family with this door is British -- I know because I heard them talking as they were leaving the house one day -- and they have kids, which is obviously what motivates most people to participate in Halloween at all. When I was at Chiswick House a couple of weekends ago I sat near a couple of young British moms (or "mums") who were talking about how to costume their children for the day.

In the Guardian, a writer recently compiled a list of do's and don'ts for trick-or-treating, for those uncertain how to proceed. There were some funny comments on the article from readers about their own experiences with Halloween:

"Yesterday I was in the park with the spaniels and two people appeared. Or rather, one person and a crocodile. Yes, here was a person in an inflatable crocodile suit, complete with tail swishing back and forth. It failed to freak me out but it scared the crap out of one of my dogs."

Anyway, as usual, Dave and I plan to keep our heads down tonight. I didn't buy any candy and we don't have a pumpkin. We haven't had a trick-or-treater since moving to London, and I doubt they'll start now. But just in case, we'll stick to our annual routine -- turn off the porch light and hide in the back of the house, watching television. (Pretty much our nightly routine, come to think of it!)
Posted by Steve Reed at 6:44 AM