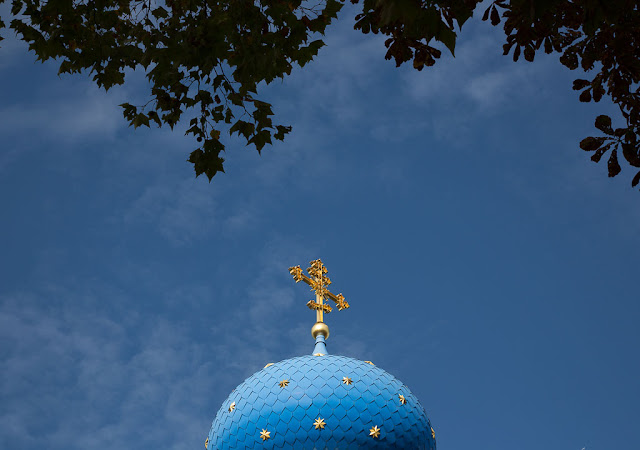 Another goal of my walk through Chiswick on Saturday was to see the Russian Orthodox Church there, and specifically its beautiful blue dome. I usually see it while speeding past on the Great West Road on the way to Heathrow, and I'd never photographed it. I've been waiting for fall, because I thought it would look good against a blue sky and framed by autumn leaves.

The exterior of the church, which has a mouthful of a name (Cathedral of the Dormition of the Mother of God and the Royal Martyrs) is actually not all that interesting architecturally, aside from the dome.  I didn't go inside.

The Royal Martyrs, in case you were wondering, is a reference to the Russian royal family killed by the Bolsheviks in 1918. There's a cross erected in their memory in the church courtyard. 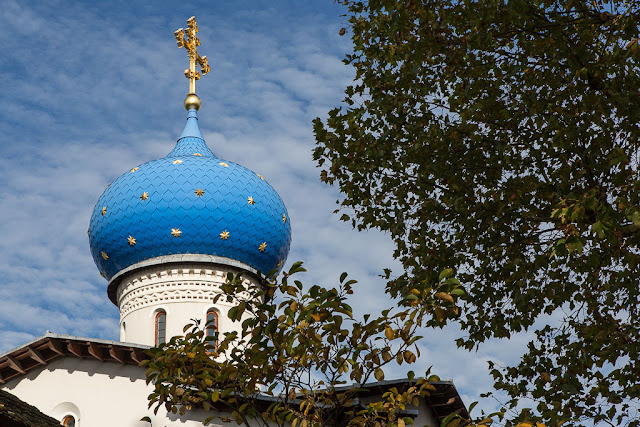 Yesterday Dave and I went to lunch with our friend Chris at a favorite pub in Notting Hill. I had a pint and then Chris insisted on ordering a bottle of wine, and of course Dave isn't drinking these days because of his Crohn's. So Chris and I wound up splitting the bottle ourselves, and let me just tell you, that was the booziest lunch I've had in a long time. We argued about Brexit, as usual. Chris is a leaver, but he went the day before to the huge People's Vote march, a massive demonstration in favor of putting the Brexit deal to a second vote. So he was primed to talk about it. I may be imagining things, but he seems to have grown more sheepish about Brexit as it's become apparent that Britain is giving itself the shaft.

(I considered going to that march myself, but since I can't yet vote here, it seemed inappropriate somehow!)

About the only other interesting thing I did yesterday is plant some cyclamens in the pots on the front porch. The zinnias that inhabited those pots had faded and gone scraggly, so I dumped them. To everything (turn, turn, turn) there is a season (turn, turn, turn).

Here's a short video showing Olga having an exciting encounter on our morning walk yesterday morning! You gotta admire her enthusiasm. She's all in.
Posted by Steve Reed at 6:51 AM