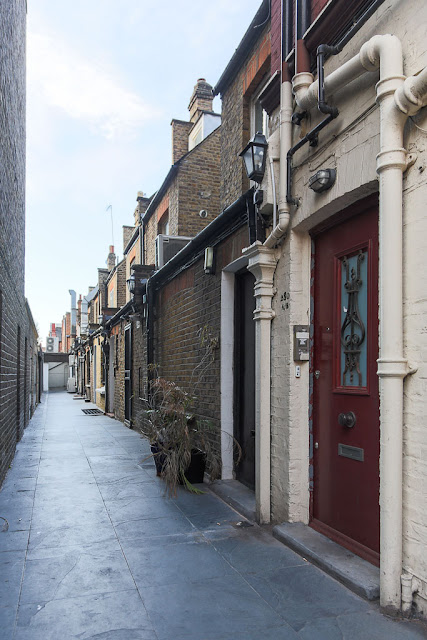 This alley is near our flat. I pass it every time I go to the shops on the high street, and I always check on the mournful condition of those poor plants, which have been sitting outside that back door for months. (The dracaena has been there since early this year; the palm is a more recent addition.)

I considered trying to save them, but they're not really "trash" since they're not in a refuse area, and as a rule I don't steal even dying plants from outside people's doors. I do have some scruples. 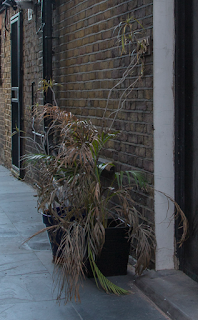 Speaking of rescuing things, last night I was walking home from work and I passed a shopping cart sitting on the sidewalk. People who know me know this is one of my pet peeves. I just don't understand why anyone would wheel away a shopping cart and then abandon it willy-nilly. As I've written before, this obsession comes from my years as an employee at Scotty's hardware, in the mid-'80s, when I periodically was sent out to round up carts that had sometimes made their way deep into the surrounding neighborhood.

It's nagged at me ever since. From my journal in May 1999, when I lived in Sarasota, Fla.:

I forgot to mention the shopping cart fiasco. The last couple of weeks I've noticed several shopping carts congregating around the apartment complex. I can't imagine who would be declassé enough to bring home a shopping cart, but there you are. So on Sunday I took three Walgreen's carts back to the shopping center -- they'd been sitting out in the median on Treeline Drive. Then, yesterday, I saw several behind a dumpster. So last night I took those back, too -- 2 Publix and 2 Walgreen's...I felt kind of silly wrestling my way along Beneva Road with four shopping carts, but hey...I really think doing one good deed per day (at least!) is a good way to maintain my karma!

Twelve years ago, while blogging about another stray cart in New York, I mentioned an entertaining Web site called The Stray Shopping Cart Project. I'm glad to see the site is still up, though some of the images don't seem to work. The project classifies the many varieties of stray shopping carts based on where they're found and the likelihood that they'll be returned. The one I saw last night seemed to qualify as a simple B/1 "Open True."

In this case, I decided to return it to the store. It was a moderate distance and on the other side of a train line, which meant I'd have to drag the cart up and over a pedestrian bridge, but I had to go that way anyway and figured I could manage. So I set out, clattering down the sidewalk.

I got the cart up onto the bridge with no problem, and fortunately once I'd crossed a guy walking behind me offered to help lift it down. "I've helped a lot of people with baby push-chairs but never a shopping trolley," he said.

I told him I'd found it -- I didn't want him to think I'd taken it from the store myself. "Now you can cross that off your list!" I said.

Anyway, back at the store I pushed the cart into a line of carts in the parking lot. Usually there's a little key you insert into the plastic handle to get back a £1 coin you have to insert to use the cart in the first place. But in this case, the plastic coin holder was broken, so I didn't even get a pound back!
Posted by Steve Reed at 7:15 AM