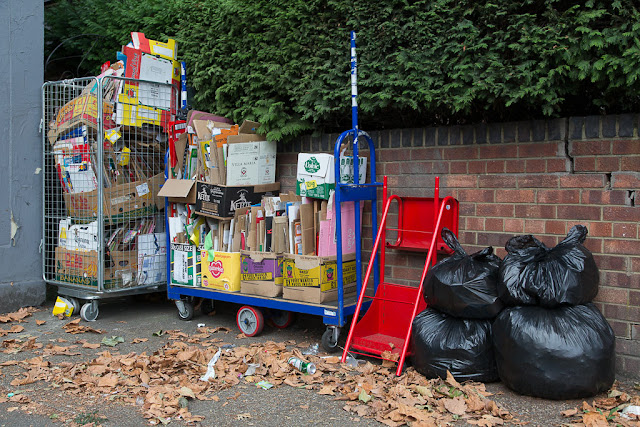 I posted this photo of some colorful recycling and rubbish on Facebook, and my aunt called it "interesting." Is that what's known as "damning with faint praise," do you think? "Interesting" always seems to imply a kind of skepticism.

I remember hearing a story years and years ago about Queen Elizabeth II trying a hot dog and pronouncing it "interesting," but I have no idea whether it's really true. I just did an internet search and can't turn up any references to the episode, so maybe it never happened. (There is, however, a rather thorough piece about the likelihood that Prince William has ever eaten a hot dog.) 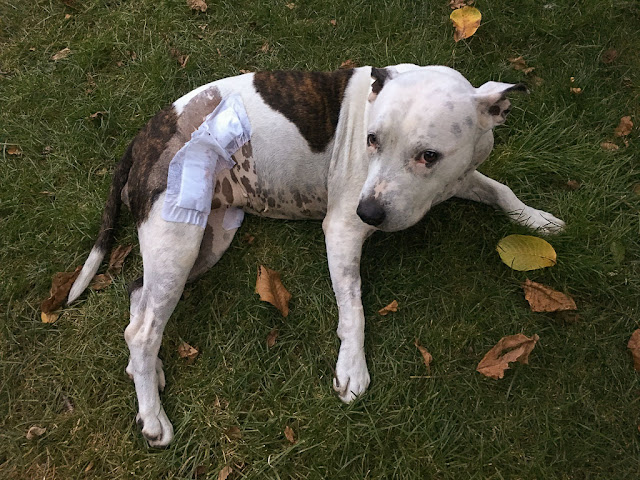 Anyway, I've buried the lead here, because I know you all want to hear about Olga and her surgery. As you can see, she came through fine, although she was seriously stoned when we picked her up last night. The first thing she did when she got home is go out in the back garden and lie in the grass.

As dark fell we finally coaxed her inside and since then, she's been sleeping heavily. She barely moved all night, from what I can tell, and she's snoring now.

The good news is, the vet said the x-rays showed no serious issues with her back legs. She has some spots that could be mildly arthritic, and causing her a bit of pain, and she gave us some pain medicine for whenever they flare up. No surgery is needed, though.

The bad news -- or the potential bad news -- involves the skin lumps. The doc removed them and sent them away for pathology, but apparently there's a chance that they're mast cell tumors, which can range from benign to very serious and even fatal. We caught them early, but I'll still be on edge about that until we get the pathology report next week. Apparently mast cell tumors are more common in so-called bull breeds like Olga, and they often appear on a dog's hindquarters around the age of 8 or 9 -- which is the right time and the right place. We can only hope, if that's what these were, that they aren't a particularly aggressive type.

We've cancelled Olga's dog walks for the rest of the week, and next week too, so I'll be coming home for lunch to let her outside and check on her. So far she hasn't shown any inclination to nibble on her bandages, but if she does we're supposed to put an old t-shirt on the lower half of her body. She's going to hate that.
Posted by Steve Reed at 7:16 AM