In Limbo: The Carlton Tavern 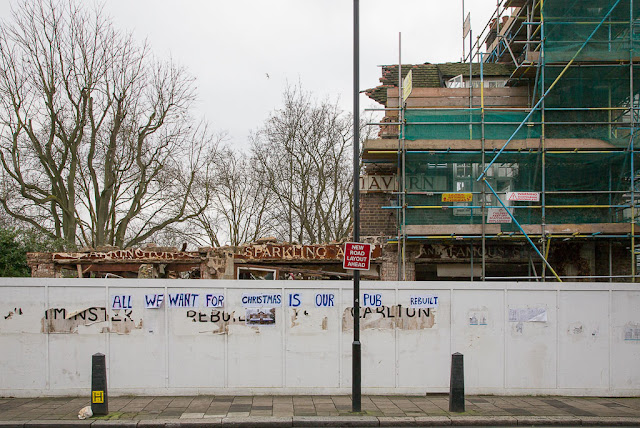 Yesterday I took a lunchtime walk over to the Carlton Tavern, the pub that was illegally and despicably demolished last year by its Israeli owners on the eve of being landmarked as a historic structure. You may remember that the owners were subsequently ordered by local government to rebuild the 1920s-era pub "brick by brick."

I still doubt that will ever happen, but I applaud the decision. As you can see, there's no rebuilding on the site at the moment.

Apparently the owners have appealed both their rejected plan to build flats on the property and the order to rebuild the pub. They originally wanted their appeals heard in private, but the government has ruled that they should be given a public hearing. As I understand it, part of their argument against rebuilding the pub is that the historic detailing has been substantially destroyed! The chutzpah!

Anyway, it's a fascinating and tragic case. People in the community are still on a campaign to see the reconstruction through, and I say bravo. Because as unlikely as it sounds, what else would show developers all over the city that they can't simply do whatever they want?
Posted by Steve Reed at 6:28 AM