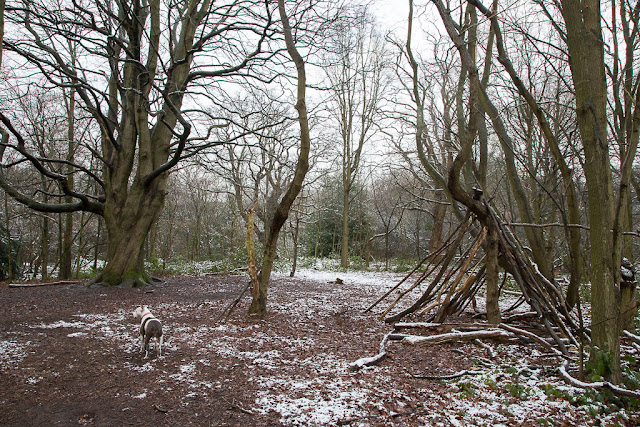 I took Olga to Hampstead Heath late yesterday morning. The snow was melting and heavy drips were falling all around us, but quite a bit was still on the ground. 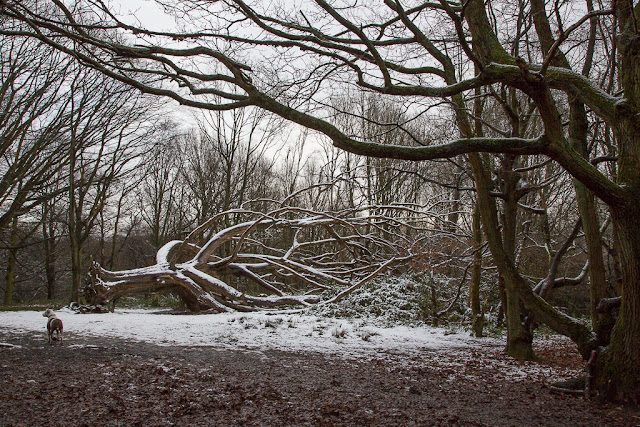 It was super-muddy, as I expected, and also icy. The paths were slippery and I fell once, though I caught myself before going down all the way and thus spared my clothes. (Then I had to find a clean-ish puddle to wash my muddy hand!)

I said yesterday that Olga didn't like the snow -- but actually, once she was out and about, she had a blast. She got filthy and required a serious bath when we got back home. 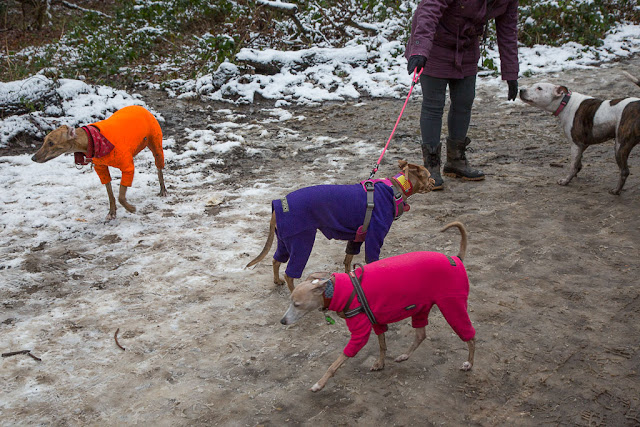 We came across some bright and athletic-looking whippets or Italian greyhounds. The one in pink was named Pickles, but I didn't get the names of the other two. Dave (who did not accompany us, but saw my pictures) said afterwards that Olga clearly wants a fancy winter coat too -- but it looks to me like she's more interested in cadging a treat from the greyhounds' owner!
Posted by Steve Reed at 6:44 AM

I did ask if Olga had a winter coat...As for treat-seeking, my male cat has every other animal I know beat by a mile! Enjoy your day!

On the road to Lily's house, there are horses in fields on both sides of the road. One side's horses all get coats when it's cold. The side's horses do not.
We worry.
That Olga! She's such a sport! So are you, dear Steve Reed.

Those dogs in the last photo don't seem to be paying much attention to Olga. It almost looks like they are a bit embarrassed to be seen in those colorful outfits.

Greyhounds are so dainty looking. Olga, on the other hand, is a "sturdy" girl and doesn't need a fancy schmancy coat :) Love that second photo with the horizontal limbs on the trees. Glad you did not fall ALL the way. I've done the puddle thing as well; lesser of two evils is how I see it.

Olga is no wimp - unlike those dogs in their fluorescent onesies - she's made of sterner stuff.