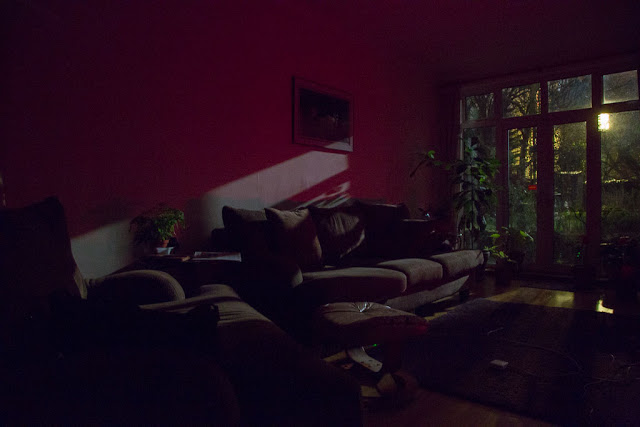 I woke up in the wee hours of Thursday morning and came out to the living room to sit for a while. The moon was almost full and very bright, and I decided to try to take some photos that would capture the moonlight.

Reflected light is very dim, no matter how bright it appears to our own eyes, so I put the camera on an interior windowsill where it wouldn't move and held open the shutter for an extended period of time. What I wound up with, after several tries, was this.

At first I couldn't figure out where all that red color was coming from. Then I remembered the digital clock that sits on top of our TV table -- it has a red dial! The room doesn't look red to the naked eye, but the camera picked it up.

The bright square outside is the window of a neighboring building, which is some distance away. It may appear to be the source of the light slanting on the walls, but that really was from the moon.

Anyway, it was a fun experiment!
Posted by Steve Reed at 6:35 AM

I got a fish eye lens and a macro lens for my iPhone for Christmas. I took that photo of the eraser postcard with it. It's fun to experiment with cameras.

When you say it was the "wee hours", do you mean you got up for a "wee"?
Interesting experiment.

Excellent! Love when this kind of stuff happens!

I love it! Great job. It's interesting what shades of light the camera picks up.

Very cool! All my attempts to get interesting pictures of light do NOT turn out this well. Of course, I spend all of 10 seconds deciding what setting I want to use on my phone - flash or no flash. Ha!

Cool and very interesting - I thought my inexpensive camera was solely to blame for pictures not turning out the way *I* saw the scene (esp. for dusk or night photos) but maybe there's a bit more than that going on. This makes me want to keep trying.