Français, and a Crowded Gallery 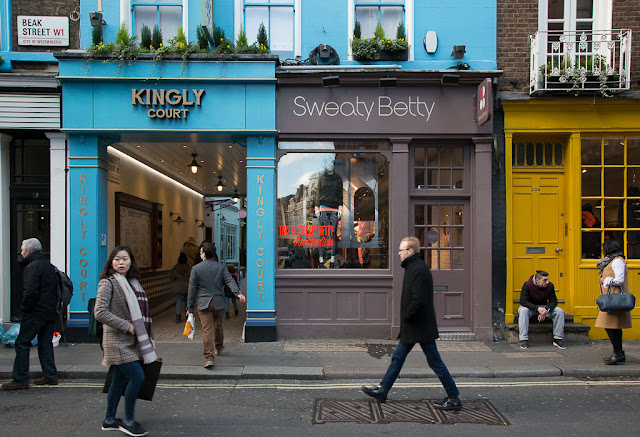 I was out and about all day yesterday. I left home about 8:30 a.m. for French class and didn't get back until around 7:30 p.m. with Dave.

French has been going better lately, heureusement. After a frustrating period when I felt like I was spinning my wheels, I'm starting to see more improvement. I'm sure I still wouldn't be able to talk about anything more complex than ordering coffee with the average French person, though.

I got a laugh from the class when I tried to come up with a word for medicine and I used fanid, which is what a pill is called in Morocco. I guess fanid must be Arabic and not French, because no one knew what the heck I was talking about.

Anyway, class lasted until 1 p.m., and then I grabbed a soup and sandwich from Pret before going on a photo walk through Marylebone, Bloomsbury and Soho. My goal was The Photographer's Gallery, which is having a retrospective of the work of Saul Leiter, a mid-century street and fashion photographer in New York. I'd heard it was a good show and indeed some of Leiter's pictures were interesting, especially his atmospheric color shots. The gallery, however, was incredibly crowded, which made my enjoyment of the show more difficult. I got out of there as quickly as I could and went walking for a couple of hours to take my own photos.

Afterwards I caught the tube down to Brixton to meet up with Dave and attend a birthday gathering for one of our friends from work. I met Dave by the David Bowie mural, where memorial gatherings are still going strong. Flowers are mounded up now even more than when I photographed it a couple of weeks ago.

The birthday was fun, but we gathered in a packed little pub where we couldn't even sit down. Dave and I beat a hasty retreat after a couple of beers. As we get older, I find, we are less and less tolerant of crowds.

We were happy to get back to Olga and the cozy comfort of our flat. Have I mentioned that we've started watching the Amazon series "Transparent"? It's terrific. We're binge-watching again -- nine episodes so far!