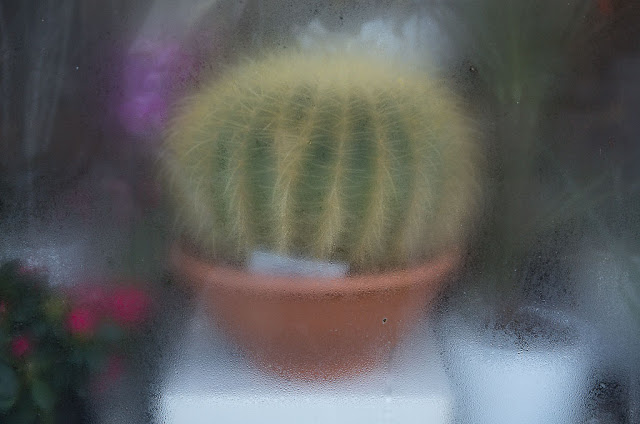 We're still trying to deal with our landlord and the collapsed bush. I think I mentioned that while the bush is no longer blocking our front door, it's now lying on its side across the landscaping at the front of the house, which is not a satisfactory situation. It's too big for us to remove ourselves, and besides, the front garden is the landlord's domain.

So this morning, during the 1/2 hour of sunlight I experience while at home on a weekday, I need to take pictures of the bush and send them to the managing agent, at his request. Maybe then he can get it resolved.

He's also asked me to photograph a tree or bush that our neighbor has complained about -- something about it blocking her window. I'm not sure which tree or bush he means. Our neighbor doesn't like one of the trees in the back yard because a branch overhangs her property -- she's complained to us about it before -- so I'm going with that one. But I can't see how she could possibly argue that it interferes with her window. It's 25 feet from her house.

We've tried to like this neighbor, but she's the same woman who uses our garbage cans and then expects us to do 100 percent of their care taking -- moving them back into the alley after the garbage men come, that kind of thing. She's hyper-attentive to all of Dave's gardening, often critically, and she's been known to suggest that we mow our lawn. (We're not super-meticulous but we never let it get crazy.) Basically, she's Gladys Kravitz. Why is she all up in our business?

I have the terrible feeling that she's targeted some other bush on our property, and I'm going to make clear to the managing agent that we want to be consulted before they make any changes.

In other news, my French classes start again on Saturday. I wish I could say I'm looking forward to them, but frankly, I'm kind of dreading them. If I'm ever going to learn this language I need to keep plowing ahead, though!

(Photo: A cactus in the fogged-up window of a florist's shop, West Hampstead.)
Posted by Steve Reed at 6:46 AM

Your neighbour would hate to live nextdoor to us. I should send you some photos so you can show her and tell her to back off 'or else you'll do THAT'. :-)

I like your cunning use of the adverb "frankly" in a paragraph that refers to your French classes!

what a pesky neighbor! sounds like someone who feels powerless and thus must make everyone around her miserable by cutting them down a notch (along with your plants). hope you can find a rhythym with french class.

I really do hate dealing with neighbors like that. I think I'm lucky not to have had any problems where I am living now. I love the foggy cactus photo today. Very nice.

Unfortunately, some people just aren't likeable, no matter how much you try ... and the agent should have asked your neighbour - not you - to send the picture of whatever tree was bugging her! People, eh? :)

perhaps it's time for you to start complaining about how she keeps her yard. and maybe get chains and locks of the trash cans. I had a complaint made to the city about how I kept my yard once and they sent someone out to check on it and give me a citation. my front yard was basically a wildflower meadow and I got lots of compliments on it. it had spread down into the drainage ditch with water loving and absorbing plants and water never backed up during our heavy rains so I let it be. the inspector said that someone found it offensive. offensive! I pointed to my neighbor's yard which was void of shrub, bush, tree, or flower, nothing but grass. I told her I found that offensive and was she going to give him a citation? we settled on keeping the bottom of the ditch clear and so I did not get fined and I kept my wild yard the way it was.

Maybe spend a summer in France. I guarantee you, you'll be pretty fluent after that (and maybe pretty broke, lol).

neighbors *sigh* seems even the best fences can not make them better. We have a couple, one resulted in a law suit against Mr. Man ... he was in the right and though it did cost lawyers fees and surveying he got his way and made the ditch way better, The neighbor has been very nice since. Nothing like a good take down. Now we have a couple of gardeners cleaning up the mess that was becoming a ghetto looking event...All of the neighbors are pleased.37 Paddington has a pretty great idea there!

The best way to learn French is to live there. The accent, the colloquialisms. Nothing like learning with the natives! I remember when we first moved to France and I could only speak a couple of lame sentences. They sent us to a language school in Burgundy in an old estate where for the first day at dinner we could only speak if we could speak in French. I have to say between us all it was a pretty silent meal!

I learned a lot in the two years we lived there and I think I have a pretty good accent (at least for the Lyon area). I love languages and the funny things about them. I only wish I could keep it up here in the States. Sometime I dream in French and I speak more fluently than I do in real life. Hah!

Find yourself a native French speaker, make friends with them and agree to speak only French...French radio and movies via the internet would also help if you can't get to France.