Stained Glass, and a Stock Pot 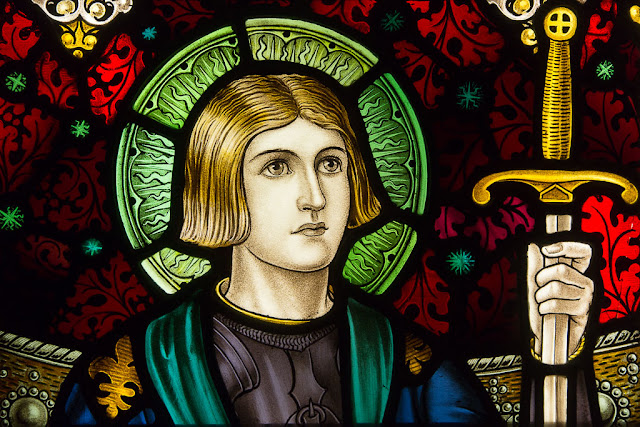 These stained glass windows are located in the library where I work. Aren't they amazing? They aren't actually installed as windows -- they're in protected cases backed by special lighting. They're taller than I am.

This window depicts Joan of Arc and the one below depicts the Venerable Bede. They are the work of Luke Dampney, who created them between 1920 and 1930 for All Saints Church in Plymouth, which has since been demolished. Dampney's windows were salvaged and preserved in the London Stained Glass Repository, which was created by the Worshipful Company of Glaziers & Painters of Glass and English Heritage to save creations like these from "redundant" churches.

They were installed in the library as a memorial to a family from our school who died in the Lockerbie airliner bombing of 1988.

I think it's pretty amazing to have these in our workplace, though like anything we tend to stop seeing them after a while. I took photos the other day to remind myself that they're there. They make especially good photo material at this time of year, when London is so dark!

Speaking of darkness, I went out last night after work to see some of Lumiere London, a festival of lighted sculptures and art installations that has been installed in and around Westminster.

You may remember that I went last week to see some similar artworks in Canary Wharf -- part of a different event with about the same theme. (It's pretty brilliant to do these light installations at this time of year, when everything is dark and people need a reason to get out and about.) 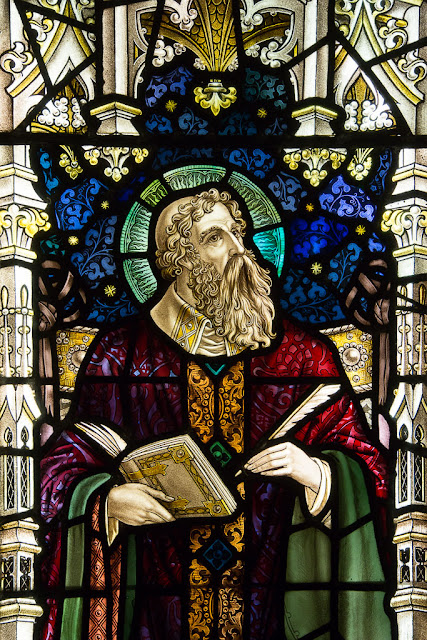 I made the mistake, though, of trying to combine an outing to see Lumiere (which my spell-check insists on trying to correct to "lumber") London with a major errand.

Dave has been wanting a big stock pot. He's talked about it for years. So I decided to get him one for Christmas, and I went to our standard kitchen retailer down in Soho. (We were so busy with travel and wedding stuff over the holidays that we never had a chance to get each other gifts!)

I bought this one, a 35.5-liter stainless steel behemoth that weighs something like 20 pounds. I guess I had imagined carrying it in a big bag that I could easily grasp, but as it turned out the shop didn't have a bag big enough, so I had to hold the pot (wrapped in the largest available bag) by the handles.

As you can imagine, that got old fast. I didn't try to see any of Lumiere London after all!

Instead I trudged straight to the tube, where I expected to be questioned by security staff at any minute about what I might be carrying in that immense pot. Surprisingly, no one questioned me, though I did get quizzical looks from fellow passengers as I schlepped it home.

How wonderful that someone had the idea to resurrect those stained glass beauties as a memorial to a dearly departed family. They are beautiful. And please remember when you are neglecting your duties in the library, The Venerable Bede is watching you!

Those are beautiful photos. Does your library need postcards? You should make a ton of money!

Wow, these are impressive windows to have at your place of work. I am so jealous that you have this Lumiere thing going on, I am almost tempted to hop over to London for a peek. Almost.

Awww that is such a nice gift! You da man! Best gift I ever got was a cast iron wok from China , hauled all the way back, it is a huge family sized one that I still use regularly, had it for forty plus years! I do hope you get to see the light thingie! Photos have been amazing! Is it a yearly event? Of course your work place windows are incredible! Nice to have those to look at for inspiration!

the windows are incredible! it's so hard to function after the sun goes down in the dead of winter. light displays are a great idea. hope you make it back out there.

Please do go back and take pictures for us!
I bet that Dave loves his stockpot. I know I would!
How very cool to work in a place where Joan of Arc watches over you all day.

What an amazing thing to have so near. They are stunning. I'll look forward to some Lumiere photos in the future. I've seen a couple on some other blogs and they look amazing.
I'm kind of a fan of a couple of cooking shows and on one of them, Ina Garten makes homemade chicken stock in a pot like that with two whole chickens and lots of veges and herbs tossed in. That must taste fantastic.

And now the stock pot has a good story attached to its procurement! That just adds to the giftiness.

I think some selfies of you doing things like lugging a large stock pot around London and on the tube are in order. :)

And those stained glass windows are beautiful -- especially Joan's eyes. Oliver and I toured an amazing stained glass window business in Pasadena last year, and I learned so much about the old ways of doing it. Today, the computer programs are such that almost nothing is drawn. It seems a shame.

I like Elizabeth's selfie idea! I, of course, would have taken a cab!

Oh my, that stained glass is lovely ...What's the first meal to be from that stock pot?

The stain glass windows are so beautiful and so well lit up. How lucky you are have a work environment which includes them. I'm surprised that you have not photographed them before now.