My Name in Lights 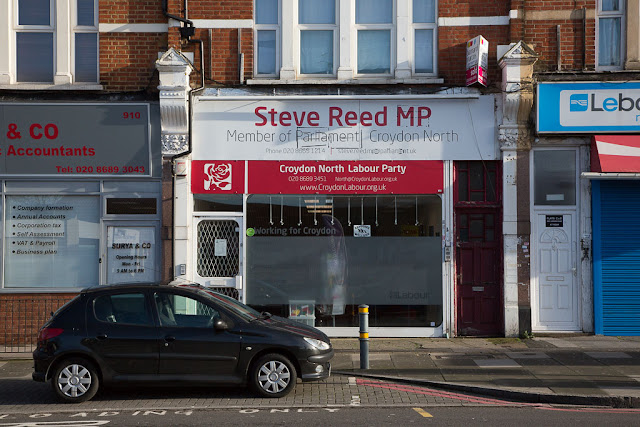 One of the more surreal experiences I've had lately came about ten days ago while riding the bus into London from Gatwick Airport. I looked out the window and saw myself. It freaked me out, until I realized a nanosecond later that I was seeing the offices of the Member of Parliament who shares my name.

Mr. Pudding had told me about this particular Steve Reed so I knew he was out there (and thank god he's Labour), but still -- the storefront gave me a jolt.

Yesterday I went back down to Streatham, Croydon and Mitcham, in far south London, and took a long photo walk, with the objective of photographing my namesake's signage. 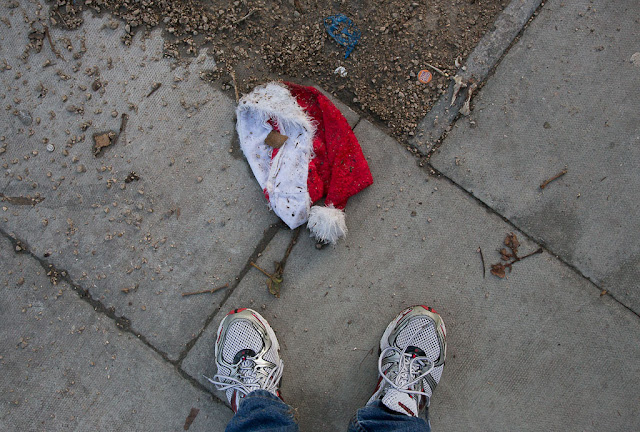 I saw lots of other interesting sights too, of course, such as further indications of the passing of Christmas. It was a great day to be outside, sunny and pleasant for walking. I think we're supposed to get a cold snap this week, so I'm glad I seized the opportunity.

I saw some streets with intriguing names -- Therapia Lane, Headcorn Road -- but I was also glad I was no longer doing Bleeding London and didn't have to photograph them all.

I also saw one upsetting thing: A guy who left his dog tied near a shop came outside after the dog started barking. The dog, tail wagging furiously, jumped up to greet him -- and the man smacked the dog, hard, on the head. The dog cowered and it was all I could do not to say to the man, "Your dog is just happy to see you!" Which probably would have gotten me killed. 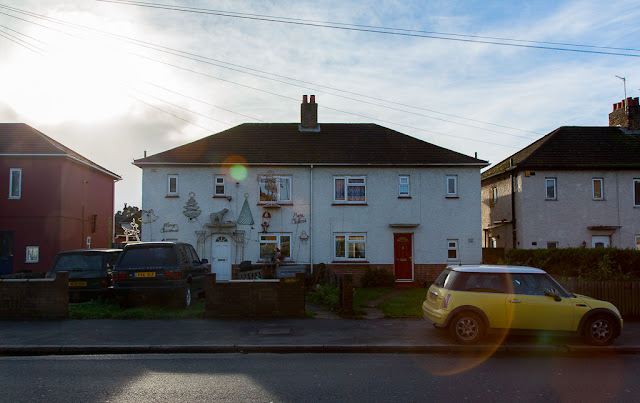 We are once again at that time of year where the sun is so low on the horizon that it shines right into my lens. Always a photographic challenge!
Posted by Steve Reed at 6:26 AM

There's a guy here who's always shouting hard at his dog. I feel bad for the little boy he once was - he must have been shouted at like that.

In the second picture I notice that someone has thrown out a pair of smelly old trainers (US - sneakers). Obviously they are a public health hazard and The Right Honourable Steve Reed should be informed immediately.

I hate to think of how that man treats his wife and children if that is how he treats his dog.

There's nothing like a good walk to give opportunities for photos.

we had two days of blue sky and now we are back to overcast. poor dog. they love so unconditionally. I doubt if speaking up would have got you killed over there but it is certainly a possibility over here.

Oh that makes me so sad to hear the story about the dog. I really do hate people who mistreat animals. Love the MP building. That must have been a bit exciting the first time you saw it.

poor little dog friend, how very confusing for it to be smacked for happiness wagging. The sun travel so low on the horizon , driving is very tricky , the sun in the eye blinds me.

I can not stand animal mistreatment. But you're right, you have to be careful speaking up. Usually I am so stunned by the actions I can't find the words anyway.

A photographic challenge that you've managed to capture in such a cool way!