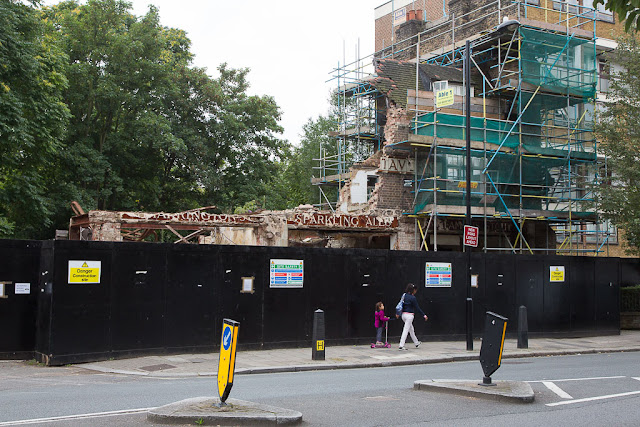 You may remember the Carlton Tavern, which I've written about before. It's the historic 1920s pub in Kilburn that was demolished by developers one morning in 2015 -- without permission and without notification to anyone.

The pub, one of the few buildings in that area to survive the Blitz, had been due to receive historic designation. But the developers had other plans for the site -- they wanted to build apartments there -- so they moved in backhoes before anyone could object.

Westminster Council was so incensed that they ordered the developer, who is based in Israel, to rebuild the pub brick by brick. Appeals by the developer failed, and work supposedly began in July. As I understand it, they have a year to rebuild. 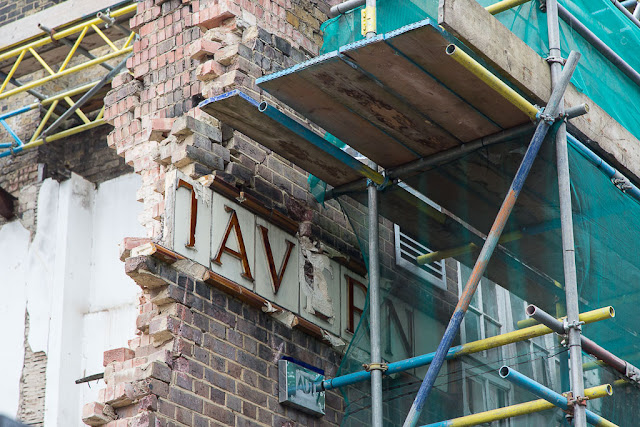 I've said all along that I'd believe it when I see it, and I don't see it yet. From the street, the site looks pretty much the same. But apparently the reconstruction includes sifting through the rubble to retrieve significant architectural features, like the remains of the lettered tiles that decorated the facade. So it may be a matter of time.

When I visited, I did hear scraping sounds from behind the wall -- but it literally sounded like one or two guys with shovels. Whatever is happening, it seems to be happening very slowly.

Still, at least there's progress. If the reconstruction goes through, this will be a significant victory for preservationists and a loud and clear message to other property owners that there are consequences to defying local regulations.
Posted by Steve Reed at 7:38 AM

I Hope that their slow progress means it will cost them a fortune... and that they are also heavily fined along the way... Greedy Developers who try to create their own rules and see every site as merely a commodity and not an important part of the community just piss me off!

There is only one word for the greedy developers who deliberately caused this destruction - "B*****DS!" They really should be locked up with drug dealers, burglars and sex offenders.

Here in my region we value our old oaks. When a gent from another country bought a piece of land and removed 14 beautiful old trees, he was prosecuted to the fullest extent of the law (which means hefty fees and a substantial replanting order). Plus the disdain of nearly every citizen of the city. Shame. So glad their rebuilding.

My Grandson lived in Kilburn for a bit so quite possibly used this pub, (I think he's used most pubs in London) lol. I'm going to ask him.
Developers seem to think they can do as they like, good on Westminster council..
Briony
x

I'm glad they're having to rebuild it - it will be interesting to see what the final result looks like.

I hope they are able to bring it back to some semblance of it's past. I really do hate greedy developers. And, now we have a couple of them running the country.

It's a good thing that one council stood it's ground with a greedy aggressive developer.

Money, money, money.
It's all about the money.
Until it isn't. And then it takes more money to make things right.

I do not see how they can reconstruct that building from a pile of rubble.

Yikes! It's amazing what people will do in their own self-interest. Me before all else always. There seems to be a trend of that sort happening in so many places.

When we were in Dresden, we saw the rebuilt Frauenkirche which had been bombed during WWII. Their reconstruction was beautiful. They wanted it done, which I am sure contributed to its success. Sounds like these people are dragging their feet on it. They need to be fined every day after their year is up, and every day the fine doubles. Money is the only language these people speak.

Well, they took a chance and they got busted - good for the council!

Several developers have done the same thing here - often on a Sunday morning.
My first time commenting but I read your blog every day!

I hope you'll report on the finished product. I can't wait to see it.

That's wild and great that they told them to do that. I hope it happens. I hate when historic buildings are destroyed -- we have so much of that going on in Los Angeles with big box houses and development, but I think it's finally coming to a halt after much work and pressure from our neighborhoods.

Thanks for your comments, everybody! Yeah, I'm watching this case closely. I'm very pleased at the strong stance the government has taken. I think the feeling is that if they don't stand up for their laws and regulations in this case, there will be a free-for-all, with developers demolishing left and right with impunity. The Carlton Tavern is only one of many, many pubs that are endangered by high real-estate values.