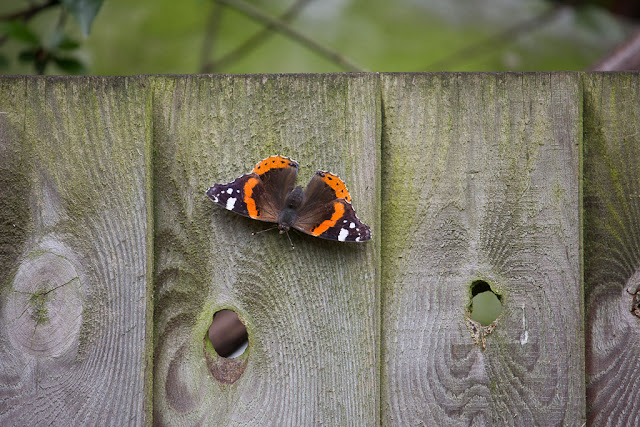 Thanks for all your comments on my post yesterday. It's an interesting discussion, isn't it?! Today, however, I have to stop thinking about equestrian statues of Robert E. Lee, at least momentarily.

(One final note: It belatedly occurred to me that another geographic location named for Lee is Lee County, in Florida. Not sure how I forgot that one, since it's part of my old stomping ground.)

Anyway, instead of the Confederacy, let's talk about butterflies.

This is a red admiral, which fluttered through our garden the other day. We've seen one come around three times, on different days. I have no idea if it's the same butterfly, obviously, but I suppose it could be. Here it is on one of our buddleias, also known, appropriately enough, as a butterfly bush.

We also saw a speckled wood butterfly, like the one I photographed in the cemetery a few days ago, in our garden yesterday. So we're getting some interesting butterfly diversity this year!

I've spent the past two days pretty much at home. We had a tree surgeon come yesterday to give us an estimate on removing the problematic holly and trimming some other trees. We'll probably get that project underway soon. I haven't shown you a picture of the holly, but trust me when I say the decision to remove it isn't being made lightly. It's spindly and squeezed between two other, larger trees, and it's affecting their growth and the available sun in the garden. The landlord agrees that it can go.

I'm reading Kurt Vonnegut's "Player Piano," which you may remember features a book cover that I've found memorable. I bought a copy to finally read it -- and it's such an appropriate book for this moment in time. It's about a society where industrial efficiency has been perfected to such a degree that machines do everything, and huge numbers of people are essentially unemployed and purposeless. These are the same people who, in formerly industrial powerhouses like Ohio, Pennsylvania and Michigan, helped give us Donald Trump and our current political climate! So, yeah, even though it was written in the '50s, it's topical.

Anyway, I'm planning to take a walk today. I have to get out of the house. It's my last day of summer vacation -- work resumes tomorrow!
Posted by Steve Reed at 7:03 AM

Such a lovely photo, Looks as though it has been painted.
Briony
x

Yup! Back to work for you my lad. All those delightful American boys and girls messing up your library and refusing to bring their books back on time... but I know you love it. You are their own "Commander in Chief" though thankfully with a different hairstyle.

What will Mrs. Kravitz have to complain about after the holly is gone? Oh yeah, the bins.

Other writers have predicted that humans will be taken over by machines. so far we keep dodging the bullet with new work being created like the high tech industry. What happens when the well runs dry on new work?

Beautiful butterflies and pretty flowers....so much better to talk about than bigots in the white house. I hope you have a nice long walk today so you can enjoy the day before you head back to work.

Love seeing that butterfly. I haven't seen a Red Admiral in a while. Such beauties! Enjoy your last day of freedom!

Love the first picture with the mossy fence boards! Our butterfly bush is not doing well in this, its third year. It reached only half its height of the year before. I don't know what I'm doing wrong. Actually, I haven't done anything, and that's probably the problem ...

Have a great final day of vacation. Those days are kind of bittersweet, aren't they?

You have given us wonderful butterfly photos over your summer. OK. I understand the reasons now for the holly removal. Go ahead with it. LOL - like it's any of my business.... and I don't feel up to reading Player Piano. Even though future changes in employment and workplaces will not affect me, I sometimes feel dispirited about the future for the young people and children of today.