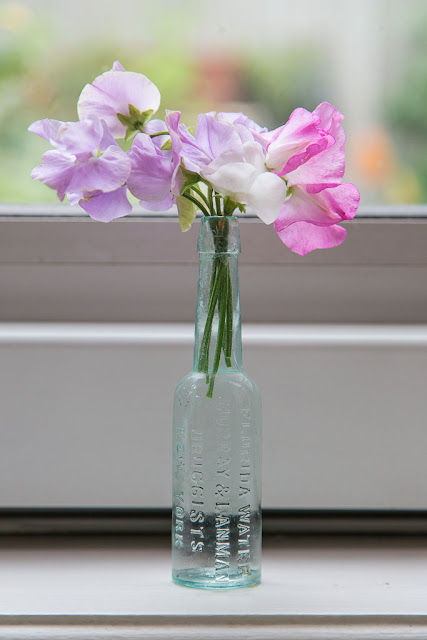 Dave grew sweet peas this year, a new thing for us. They looked terrific for a couple of months, and then the plants began to get kind of grey and moth-eaten, and laden with seed pods. The blooms began to diminish, and too late we learned that picking sweet pea blossoms encourages the plant to bloom more. Oh well.

I picked these, the last few blossoms of the season, before Dave cut down the plant. I put them in my Florida Water bottle, an antique that my British friend Liz (as opposed to my two American friends named Liz) gave me. It says on it: "Florida Water, Murray & Lanman, Druggists, New York." Liz thought it was the perfect gift for me because I come from Florida and she and I first met in New York.

It got me thinking: What was Florida Water, anyway? 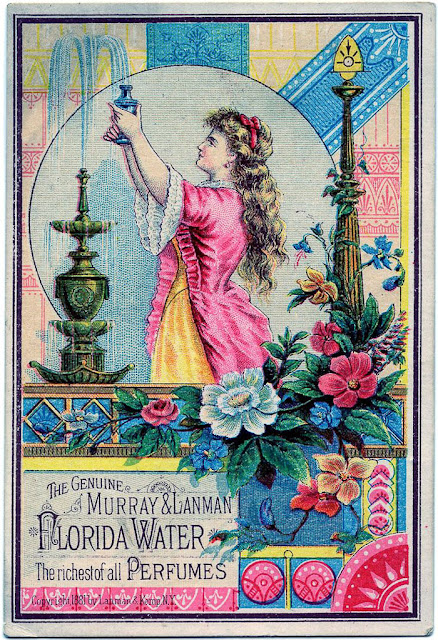 Turns out that it was basically a citrusy perfume. There's a whole Wikipedia page about it. Apparently Murray & Lanman held the trademark for the Florida Water name. I'm not sure how old my bottle might be, but apparently you can still buy Florida Water. From what I read on the Interwebs, it has magical or religious uses (if you're into that kind of thing).

I borrowed that image above from Pinterest. Turns out there are a lot of great Florida Water ads from the old days. Here are a few others: 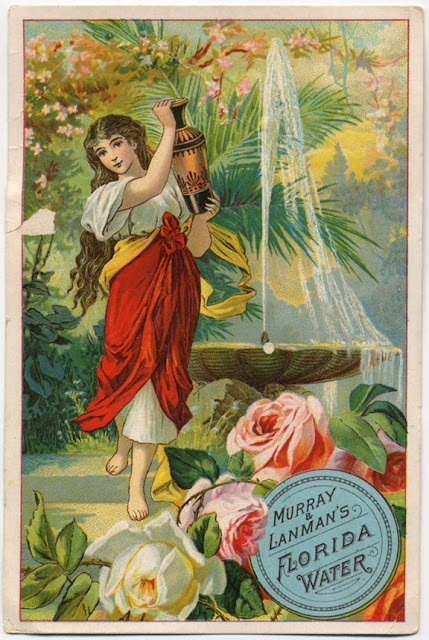 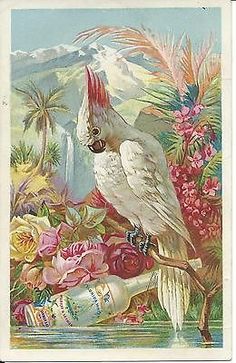 I took Olga to the Heath yesterday, where we both had a long romp. Mud was involved (for her), necessitating a back-garden bath (also for her). I've discovered that hauling my shoulder-strap camera bag long distances is starting to really stress out my back. I may have to find a better way to schlep my equipment -- a backpack, maybe?

Mrs Kravitz is on us again about our rubbish and recycling bins. They are well-maintained and neatly tucked into the alley beside our house, right next to her bins in her alley -- but as she told me when she collared me on the street yesterday, she thinks we have too many. (We have four, which for two flats isn't so bad.) She asked me to get rid of some of them, or to petition our landlord to build a higher fence between our property and hers. (She has three bins for her single-family house, for the record.) I'm going to ignore her. Sometimes, when someone's all up in your business, that's the most reasonable response.

I'm horrified by the news from Charlottesville. The worst among us feel emboldened and, indeed, invincible, because they believe the man in the White House has their back. It's terrifying, and also just incredibly sad. For the record, I too have doubts about the wisdom of dismantling Confederate war memorials -- they're part of America's history, and rather than removing them we should be explaining them, and balancing their message with monuments that more accurately reflect our modern society and expectations. But violence only begets more violence. Trump, through his words and actions on the campaign trail and in office, has propped open Pandora's box.
Posted by Steve Reed at 7:06 AM