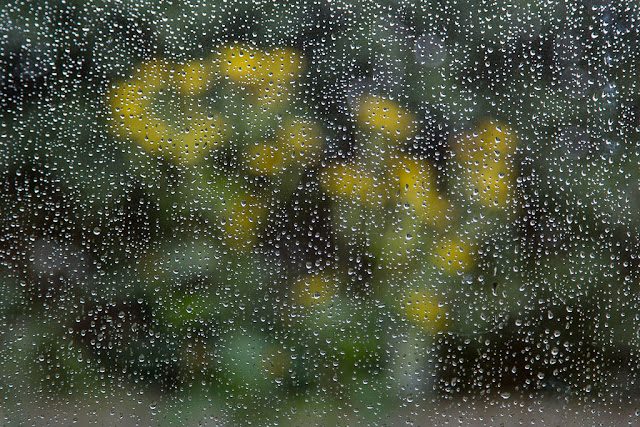 Yesterday may have been the rainiest day of the year so far. According to The Guardian, we were set to receive a month's worth of rain in a single day. I spent the whole day on the couch reading, and every time I looked up, it was pouring outside. I didn't even go out into the garden.

Olga, needless to say, was not thrilled at the prospect of leaving with the dog-walker. I wondered if it would feel more like punishment than pleasure. But we sent her along anyway and dried her off well when she got home.

We watched the second episode of the BBC's "The Man in the Orange Shirt" last night, a two-part miniseries with Vanessa Redgrave exploring how gay men coped with social and familial pressures and expectations both back in the 1940s and in the modern era. Vanessa Redgrave is a few months older than my mother! I think it's pretty impressive that she's still acting, and so effectively. Anyway, it's a good show -- I recommend it if you have the opportunity to watch it.

I also learned, happily, that I don't have to be at work until the 17th -- and not the 14th, as I'd previously thought. Woo hoo! A few extra days of vacation!

I am not enjoying this Arundhati Roy book as much as I had hoped. I was following the initial story really well at the outset, and then the book leaped to another set of characters and circumstances that I didn't follow as well, and now it's coming together but it feels very...loose. I think there's an excellent novel in here somewhere, but it's still buried in what feels like a very long, overstuffed draft. Someone needed some more rigorous editing -- that's my non-novelist's take on it.

(Photo: Our inula plant, through the rain-streaked living room window.)
Posted by Steve Reed at 7:34 AM

Thanks for the tip about the book. That is really too bad. Do you know they now make inverted umbrellas in small form for walking dogs? I've seen them and can ask an acquaintance who has a pet sit business where she got hers. Perhaps that would help Olga stay drier...

If you don't like our refreshing English rain, you know what you can do buddy!

My word! When you receive a month's worth of rain in a day in London - a place noted for being rainy - it must have been absolutely teeming

Cozumel got a lot of rain from Tropical Storm Franklin and I have been looking at the pictures online of people wading through the streets as they always flood when a good rain comes. But I think it has passed now as I hope your rain has passed too. It looks like rain here today. We shall see.
Three unexpected extra days of vacation! Hurrah! It seems to me as if your vacation just began.

I love your rainy shot today! What nice bonus to have a few more days of vacation.

we finally got a few days of good rain, 2" one day and the next even more I think but it happened in the early hours of the day before I got up. but it is still summer in August so now it is humid and steamy.

Send some of your rain here. We are very dry.

We've gotten so much rain this summer! I remember last year my dad didn't mow for the whole month of August, and this year we really could stand to mow about every four days. Sheesh.

P.S. If you get an umbrella for Olga, we will definitely need to see a picture!

We've had much needed rain for a string of days. I love rain and fortunately there's a promise of more from clouds overhead. There's been flooding in Houston and parts around us, but people simply rebuild in the flood zones so . . .

Roy's book took a bothersome turn for me too. When East meets West when there's a storytelling there's bound to be cultural smash-ups. Reading requires an ability to "meld" with an author's. It's not always an easy thing to do. I put it aside for a little while; am still reading three other books, so I'm good. I'll go back to Roy soon enough and hopefully there'll be smooth reading to the end.

Hang in there. Or put it aside for another time?

inula, such a pretty name. I may adopt it! I am not even tempted to read that book, mostly because I still can not see well enough to read. When I am able I will read only the books I love straight off the bat! Life is too short and there is such worthy literature out there. I always read the last pages first, to be sure it ends well, I can not take sad endings anymore

For my money, Vanessa Redgrave is impressive. Full stop.