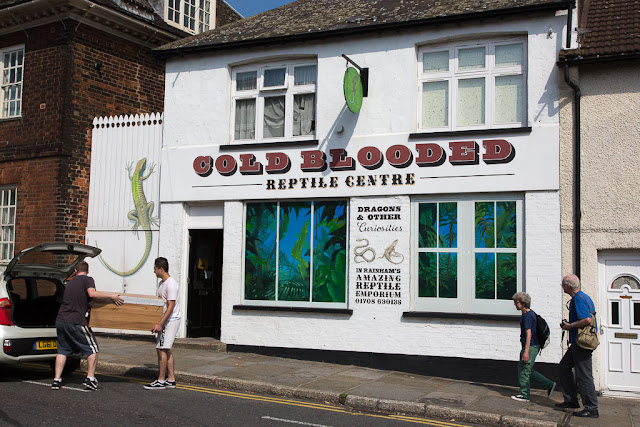 Don't you wonder what's in that wooden box they're loading into the car?

Whatever it is, I bet it bites.

Speaking of which, at around 4 a.m. this morning, I woke up to the sound of something chewing. It seemed rodent-like, and at first I thought it was in the house. But I got up and walked around and couldn't locate the source of the noise, which continued unabated despite my movement -- which made me think it probably wasn't inside after all.

After dawn, I realized I'd heard a squirrel trying to chew its way into the metal peanut feeder on the fence outside our bedroom window. I haven't closely inspected the feeder yet but a flap seems to be hanging off the bottom -- it may have been damaged. At least there wasn't a critter indoors!

Add that experience to a variety of weird dreams I've been having over the past few nights. The night before last I dreamed I was in a dark motel room, and among my luggage was a framed picture of Audrey Hepburn, which I planned to put on the bedside table while watching "Breakfast at Tiffany's." I don't know why I felt the need to go to a dark motel room to do this, unless I was also going to dress like her.

So today is the 20th anniversary of Princess Diana's death. Do you remember where you were when you heard the news? I was at a journalism convention in Chicago -- I remember walking with a friend from our downtown hotel to the nearby Sun-Times building late that night to pick up a stack of papers fresh off the loading dock. We distributed them back at the convention, and the next day a lot of people vanished, called back to work. It was such surreal, unexpected news. I remember thinking there would be a backlash against the media, and (naively) that we'd have to rethink our relentless focus on celebrity coverage and reliance on paparazzi.

I liked Diana well enough, but I was never a huge fan, and I didn't entirely understand the outpouring of grief that followed her death -- or the vilification of the other members of the royal family and the Queen. But I never pass Kensington Palace now without envisioning that huge mountain of flowers piled outside the gate.