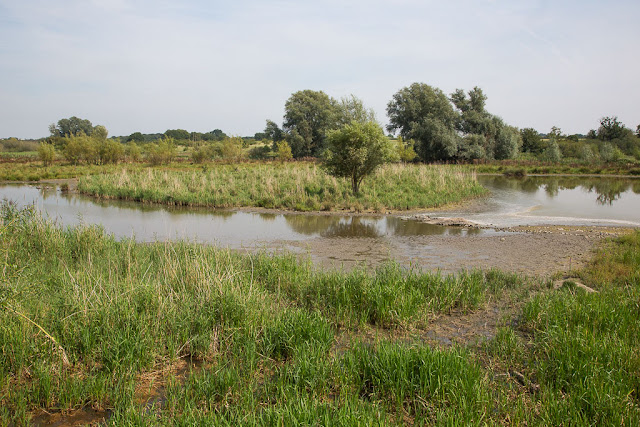 Several years ago I learned about something called the London Outer Orbital Path, or LOOP. It's a circular walking path that surrounds London in its outer suburbs -- a 150-mile journey divided into 24 walkable sections.

I've had it in the back of my mind that I might try walking the LOOP. While lying in bed Sunday evening, I decided somewhat impulsively that there's no time like the present. So Monday morning I set out. 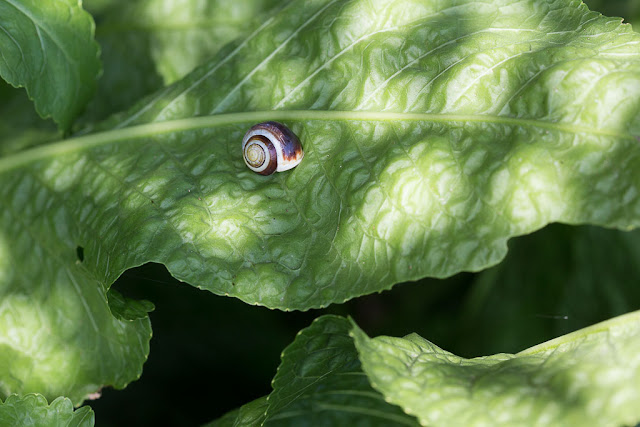 I figured any section made a good beginning, and I've always been curious about Upminster, in far east London, at the end of the District tube line. So I decided to head out that way and do the Upminster Bridge to Rainham section of the LOOP.

The path follows the course of the Ingrebourne River, a narrow tributary of the Thames. That's a marshy area of the Ingrebourne in the top photo, but that's about as big as I ever saw it get. For most of its length it seemed to be about four inches deep. 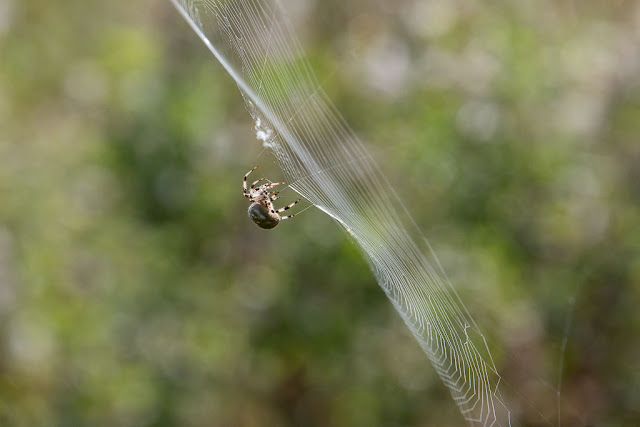 There was lots of wildlife along the way -- butterflies and spiders and birds and wildflowers. 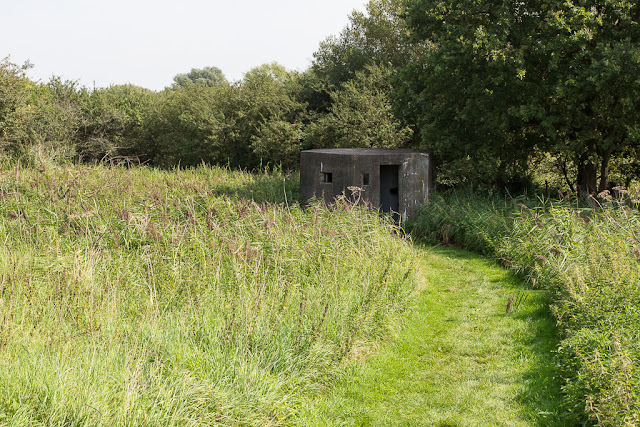 There were also leftover World War II fortifications, like this pillbox made of blast-resistant concrete. This area used to be a Royal Air Force airfield.

I followed the path four miles to Rainham, and feeling energetic, I decided to keep going. So I did another LOOP section, the five miles from Rainham to Purfleet. 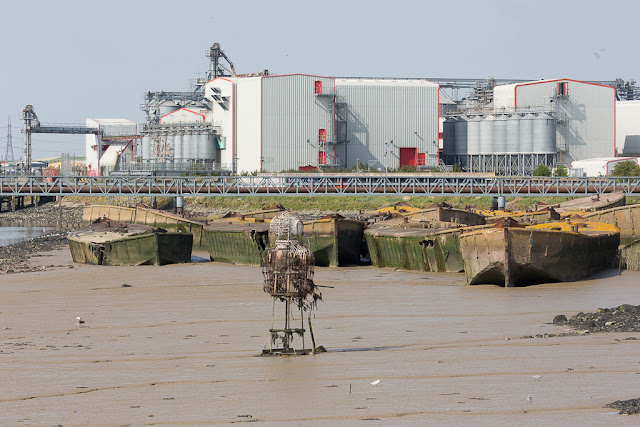 This part of the path took me through an industrial area surrounded by marshes, and south to the bank of the Thames. I passed some abandoned concrete barges, which were used to fortify the harbour at Normandy in preparation for the D-Day landings and subsequently for flood defense along the riverbank. Standing near the barges is a sculpture called "The Diver" by John Kaufman. 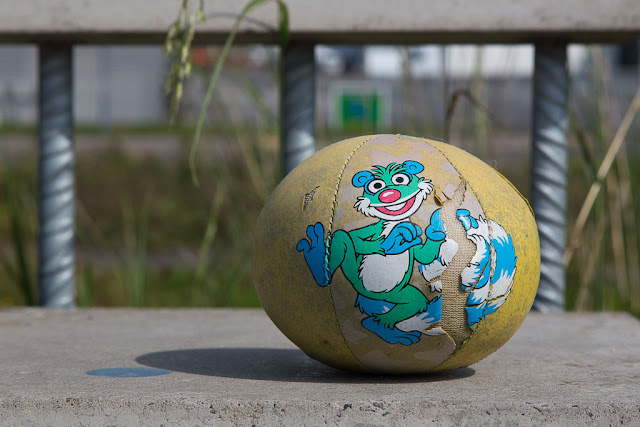 I found this abandoned toy ball near a bench overlooking the river. Litter is no stranger to this area, with lots of plastic bottles washed up along the shore, and indeed the path circles a landfill. There were also lots of shiny, sharp glass-like rocks on the riverbank -- like greenish or brownish chunks of obsidian, but not that heavy. I couldn't figure out what the heck they were. Melted glass or plastic? It gave the entire riverbank a sparkly sheen. 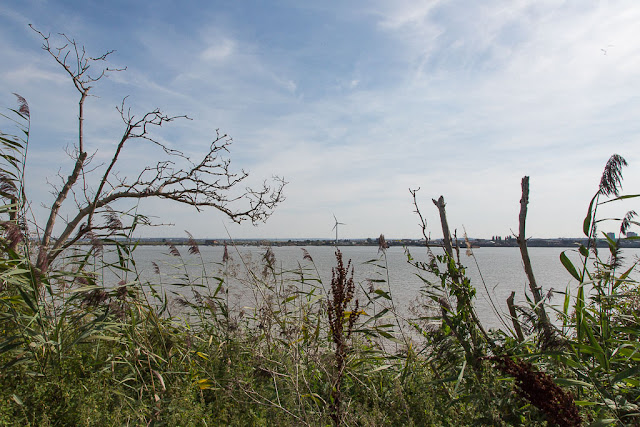 I saw plenty of seagulls and starlings and red admiral butterflies on the buddleia blooming along the trail. Several gigantic windmills churned on the horizon, cranking out electrical power. 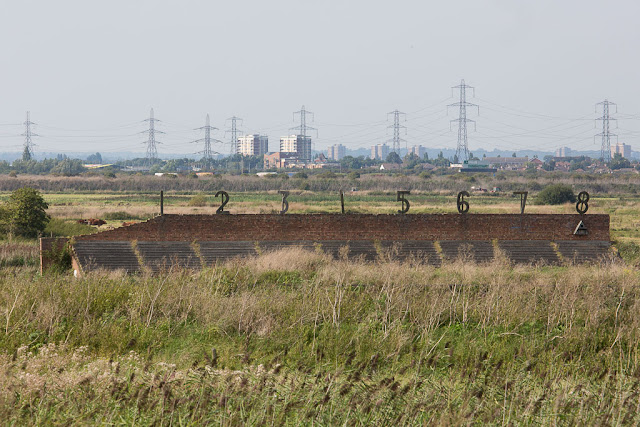 Near the end of the walk I passed this mysterious structure. I'm told it was part of an old military firing range.

By the time I got to Purfleet, I was seriously dragging, and I had stupidly neglected to put on any sunscreen before setting out. (I know! I know!) I was happy to get coffee and red velvet cake at the RSPB visitor's centre overlooking the marshes before climbing aboard a London-bound train.

The entire walk took about six hours, including a brief look around Upminster at the beginning, and a sandwich break at a Tesco in Rainham. Surprisingly, I didn't get that sunburned -- I love this country! I will merely look weathered and outdoorsy when I go back to work this morning.
Posted by Steve Reed at 7:34 AM

I'm glad you did not get a sunburn...Lots of nice photos though, not to mention exercise!

An ambitious goal - but thoughtfully broken down so its doable. That was a good hike for a nice day and you saw some cool things - success!

Steve, you are a ramblin' man!

Now a perimeter trail is a super idea. Good on you for walking part of it.

That's quite a long walk. I like that there are 24 different paths and 150 miles to explore. And you had sunshine and not much sunburn! That's the best.

I was so intrigued by your adventure that I had to do some internet searching to see exactly where you were. That really is way out east. You found some very interesting and historic things like those barges. What an adventure. Good for you!

That sounds like my kind of rambling. I don't think there are any trails like that around here though, but once I'm more mobile I will definitely look!

I love the diver. Next time lets see more of him
Briony
x

You get around dearheart!

There is an article in WaPo about two journalist who were tasked with walking the beltway. For some reason, it won't let me link right now because I'm not a subscriber but if you have some time, you might be able to find it and enjoy it.

Your loop, trek seems much more enjoyable than their walk and I wish the authors had taken the time to appreciate more but...any way..