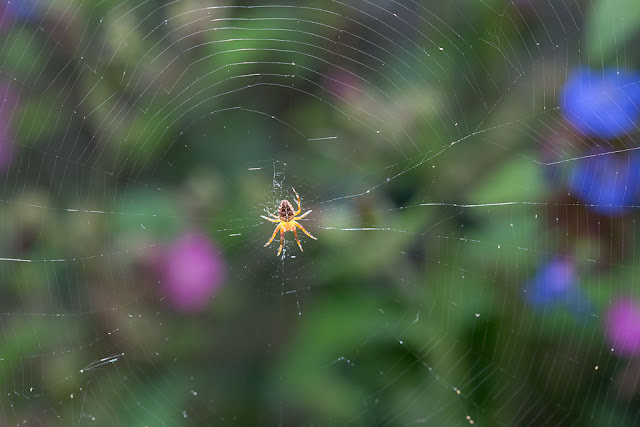 Dave and I have been noticing hordes of little spiders all over the garden. They've been hanging their webs and, presumably, feasting on the bugs that are attracted by the ripe blackberries and the late-summer blossoms. 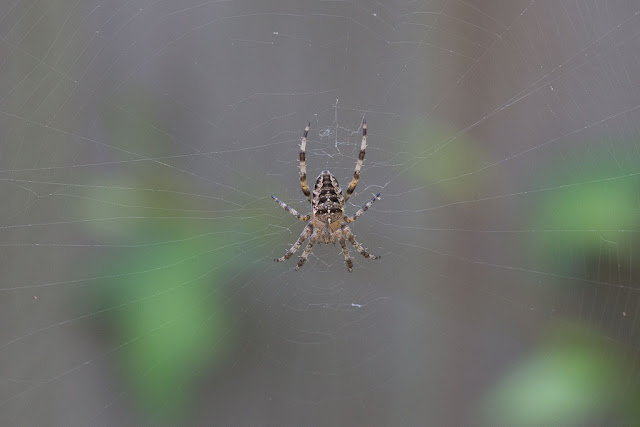 It must be the season for them. We definitely weren't seeing as many a month or two ago, though maybe they were out there and they're just now getting large enough for us to notice. 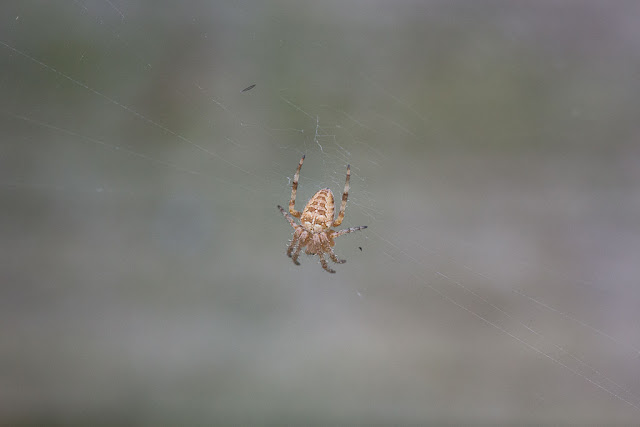 Remember our balcony arachnopet, Pat, from five (!) years ago? Pat was this same variety of spider, I think -- a common garden spider. We first noticed him/her in June, so he/she was a bit ahead of this crowd, and was a pretty good size by the time August came around. Pat disappeared in October, as I recall, when the weather got blustery and autumnal. 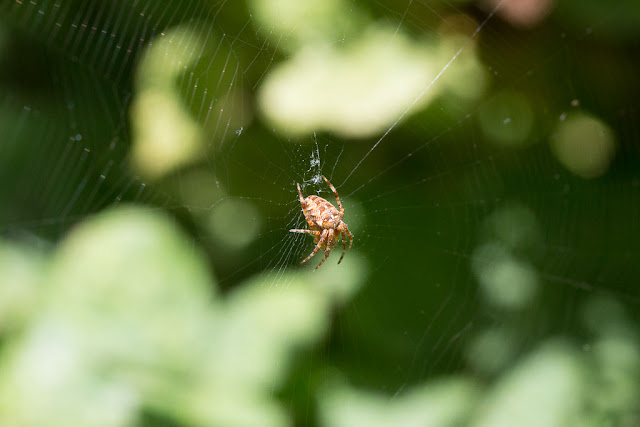 But Pat laid a cluster of eggs, which hatched the following spring. And I guess that's what's happened here. The circle of life! (To quote "The Lion King," which I'm sure did not originate that phrase.)

I spent yesterday morning trimming and weeding the front garden and the side alley, which we almost never use. The alley was full of weeds and detritus like a stray Coke can (from who knows where, because neither Dave nor I drink Coke). I definitely disturbed lots of little critters living in their weedy sanctuaries, but the job had to be done and I must admit it looks much better now. I tried to relocate the critters when possible. I carried shovelfuls of buggy dirt to the back of the yard, where the pillbugs and millipedes and ants could escape on their own time -- and then I saw a couple of robins pecking it over later, no doubt relishing the feast I had uncovered. Circle of life again!
Posted by Steve Reed at 7:19 AM

Oh you are my kind of man. I also look for the tiny critters when tidying up. I recently trimmed a plant and inspected every twig and leaf for tiny snails, yes, snails, our garden is a sanctuary for slugs and snails as well as every other living thing. We do not plant anything that they like and then everybody is happy.
Of course some people think I am crackers. lol
Briony
x

oh yes, the waning days of summer and fall are spider time. that's when the little shield spiders make webs everywhere here. when we first looked at the country house it had been vacant for a year or more and there were large webs with even larger banana spiders all over the place. after we bought it and the following season there were just a few and after that none at all.

Spiders and mosquitoes and tiny roaches and gnats and every other bug in the world, it would seem, are making their lives here in Lloyd. It's absolutely so overwhelming that I hardly know what to do. As the garden is winding down I am leaving the gate open for the chickens to go in and scratch and eat bugs and poop which is another type of circle of life, I think. Objectively it's all rather beautiful. Subjectively it's often itchy.

The number of spider species is amazing and if you take time to look spiders are everywhere.

I'm so glad to see other people enjoying the buggy critters as much as we do. I was cutting some chard from the garden the other day and noticed a tiny little spider with its beautiful red and yellow egg case on the underside of one leaf before I cut it. So, despite the leaf's perfect condition for dinner, I left it so the spider could do its spidery thing.

Our deck swing has some nice-sized webs on it - we enjoy watching the spiders do their spider thing. Of course I can't get nearly as nice a photo of one as yours are. We also have bats - circle of life indeed!

hahaha the best of intentions for pill bugs only to serve them to the birds. LOVE your spiders, I save spiders,too, and really like when they move in to take up a corner of the ceiling for winter. Spiders are cool. I suppose if there were an army of them I might change my tune.

Seems that just as we finally thaw and get used to gorgeous summer weather, it turns around and BLAM we are back under the heavy dark ,wet, cloud of fall, winter and spring.

Great pictures of your little pet arachnids :) It warms my heart to hear you tried to save the bugs, even if it ended badly for the bugs!