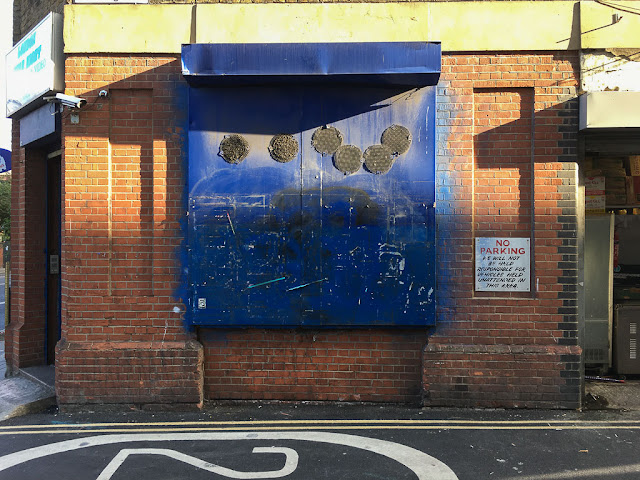 Let me just say right off the bat that this photo, taken in Hackney a couple of weeks ago, has nothing to do with the subject of today's post. I just liked the light and thought it was an interesting wall.

When I wrote about the outrageous events in Charlottesville the day before yesterday, I mentioned that I "have doubts about the wisdom of dismantling Confederate war memorials."

As I argued, "They're part of America's history, and rather than removing them we should be explaining them, and balancing their message with monuments that more accurately reflect our modern society and expectations."

I want to explore this issue a little further. I think my own perspective has evolved since I wrote those lines, and I want to explain why.

Let me say outright that I was born in the South, as many of you know, and I had ancestors who fought for the Confederacy and who owned slaves. But I've never fully identified as a "Southerner." To me, it's always been a dead issue -- the Civil War is over, and south is merely a direction on a compass. Neither I nor anyone in my immediate family have ever sympathized with the Southern cause, and I've never found it anything but absurd that some people believe the South "will rise again." I freely acknowledge that Southern culture is rooted in blood and barbarism, and I repudiate all of that.

What has made me uncomfortable is the idea of purging artworks (and statues are artworks) because they cause pain or discomfort to a group of people. This may seem cruel, given the circumstances, but it's a position I've long held regardless of the art. It seems positively Soviet to me to demolish statues because they don't convey the proper message.

(As a side note, I do not feel this way about the Confederate battle flag. A flag is an overtly political symbol, not an artistic one, and I was overjoyed when it was removed from the South Carolina capitol dome a couple of years ago. The Confederate flag has no place in current government, or, for that matter, in civil society.)

I accept that I don't look at these statues in the same way a black person does. I get that. I've always seen them as historic symbols, and figures like Robert E. Lee, to me, are more tragic than heroic or menacing. There's a sadness that permeates those generals on horseback.

But I can see now that there's defiance, too. One of my friends, a white woman from Tennessee who was one of my editors, and who I very much respect -- and who grew up immersed in Southern lore and virtually surrounded by monuments to Confederate leaders -- pointed out on Facebook that most of the Confederate statues that permeate the South were erected about 50 or 60 years after the end of the war, during a time when the KKK was in resurgence and Lost Cause mythology was gaining traction. The statues were inherently political, indeed propaganda, from the beginning.

They were meant to drive home the message that the South was not dead -- that the ideals fought for in the Civil War were still alive in the hearts of many. And those ideals include deep-seated racism that views people as property.

So with the monuments' historical authenticity in question, we're left with artistic considerations. Obviously the artistry varies widely, but some of the monuments are impressive bronze statues by noteworthy sculptors. Well, the best place for controversial art is in a museum, where it can be placed in context and not forced upon people who don't want to see it -- people who justifiably feel pain, and a dark shadow of fear, when they encounter it. I've come to believe that New Orleans, which took down its Confederate monuments and (last I heard) plans to put them in a museum, has it right. Confederate statues should be removed from public display and put behind walls, where their true history can be made clear to people who choose to see them.

The best analogy I can think of here is Adolph Hitler. There are no Hitler statues in Germany, as far as I know, but there are surely Nazi artifacts in museums all over the world. And that's where they belong -- in a repository for dead artifacts of a dead past.

What I still struggle with is how monumental (no pun intended) this task will be. The South is positively stuffed with Confederate statues. There's one in every town, practically. In fact, many of the towns and counties themselves -- Jeff Davis County in Georgia, and Lee County in Mississippi, to name two just off the top of my head -- are named for Confederate leaders. Should they all be renamed?

What about the largest Confederate monument of all, Stone Mountain in Georgia? It's the South's own Mount Rushmore, with Lee, Davis and Jackson carved into a mountainside. What the heck do we do with that? (It's interesting to note that the U.S. Postal Service put out a stamp featuring Stone Mountain as recently as 1970!)

So, yes, it's a fraught topic. I'm still mulling it over. But it's time to remove the monuments from public squares and put them somewhere where they can be fully explained to viewers -- and by this I largely mean white viewers, because let's face it, we're the ones who really need to learn why their history is tainted and painful. Putting them behind walls drives home that they are elements of the past. They do not, and cannot, represent modern American thought, even in the South.
Posted by Steve Reed at 7:44 AM