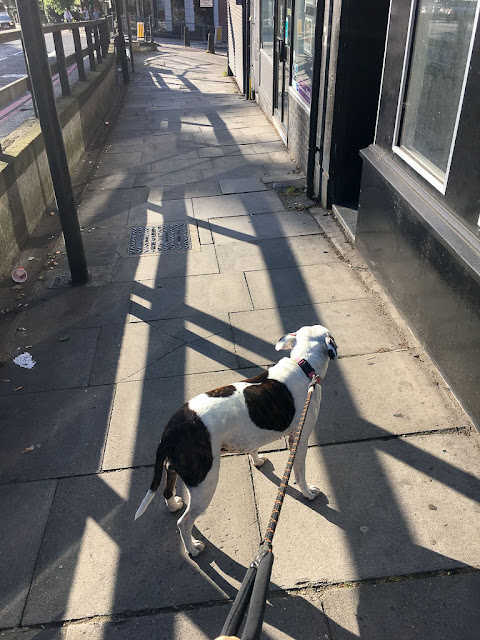 Today, a few photos from the ol' iPhone...first, one I took several weeks ago of Olga during our morning walk. When the sun is out we get good shadows on this short stretch of sidewalk! (Or "pavement," for you Brits.) 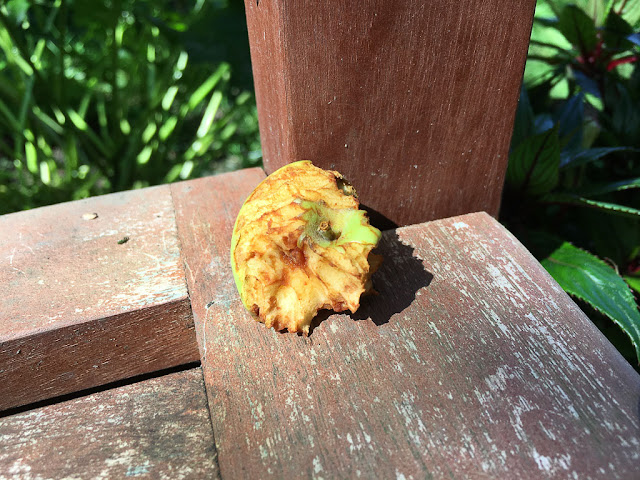 We have an apple tree, of sorts, in our back garden. I say "of sorts" because it's a twiggy, misshapen, not-terribly-attractive tree. In fact Dave has been campaigning to cut it down, but I've been resisting the idea. First of all, it doesn't belong to us, and second, it blooms in the spring and the flowers -- even on those twiggy branches -- look nice. Besides, when apples finally appear, the squirrels love them! We have no idea what these apples taste like -- they never get big enough for us to eat before they're devoured by the arboreal rodents. 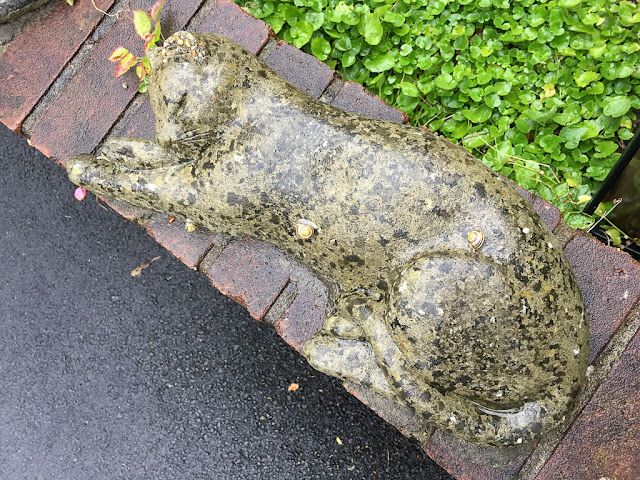 This garden statue, which sits on the wall of a neighbor down the street, has no less than four snails on it. (One of them is beneath the paws and may be difficult to see.) Grody to the max, as Moon Unit Zappa might have said back in 1982. 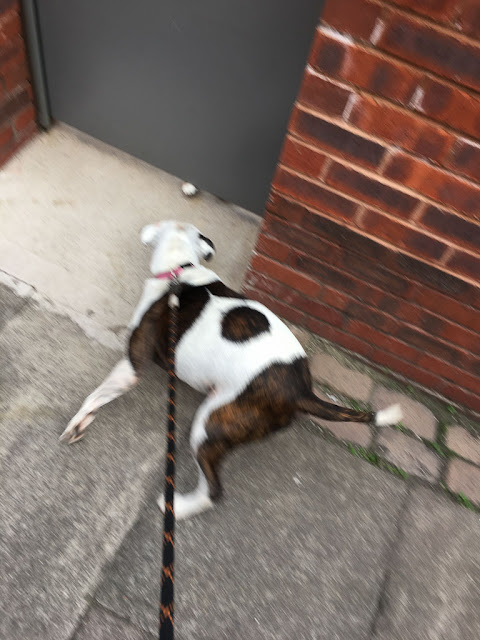 Remember how I mentioned Olga's nemesis, the cat that lurks behind the gate down the street? Well, here's another nemesis -- the cat behind the patio door on one of our walking routes. Every time we go by, if the weather is decent, that cat sticks its paw beneath the door and Olga growls and lunges. It actually scratched Olga's nose one day. Olga bled, but she didn't seem to feel a thing. 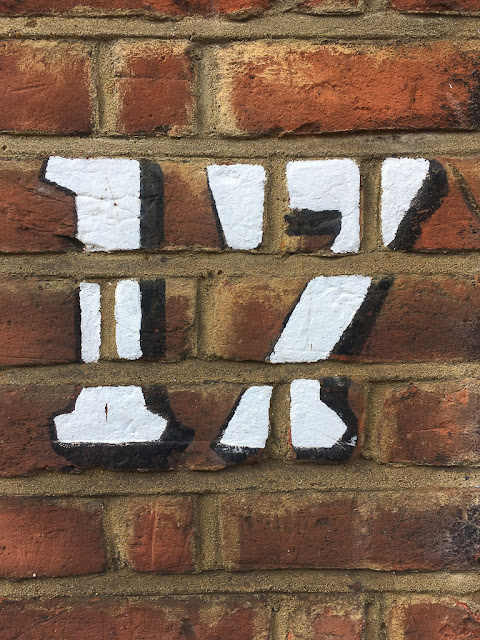 A creatively painted (or grouted?) house number in West Hampstead. 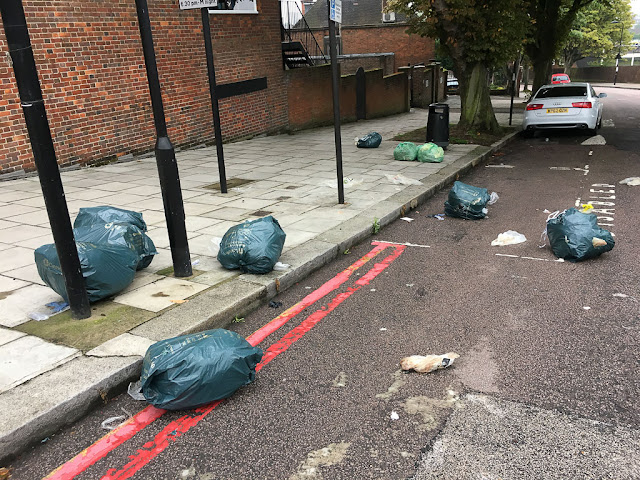 Sorry for the unattractive subject matter, but you know how I'm always complaining about the litterbug on the next street? The one who dumps the bags of meat wrappers? Well, this is what I'm dealing with. (This example is actually relatively mild, because only one of the bags is torn open. Sometimes they all are.) Yesterday I wrote a letter to Camden Council's waste contractor, complete with photo evidence. Hopefully it will result in some enforcement against the dumper. 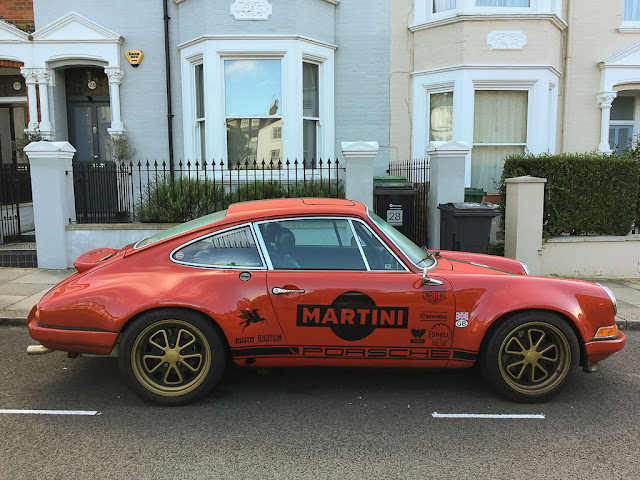 A promotional Porsche in our neighborhood. I love a good martini, but I'd rather drink it than drive it. 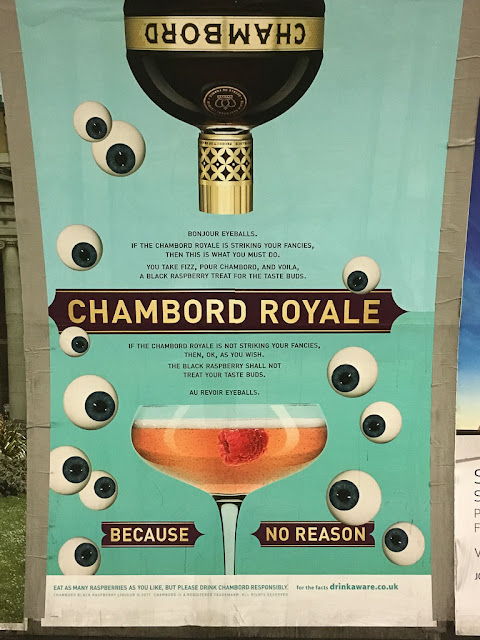 And on a somewhat related note, an advertisement in the tube that I've found entertaining. You probably can't read the text, but it's written in a sort of Franglish. "Bonjour eyeballs!"
Posted by Steve Reed at 6:46 AM