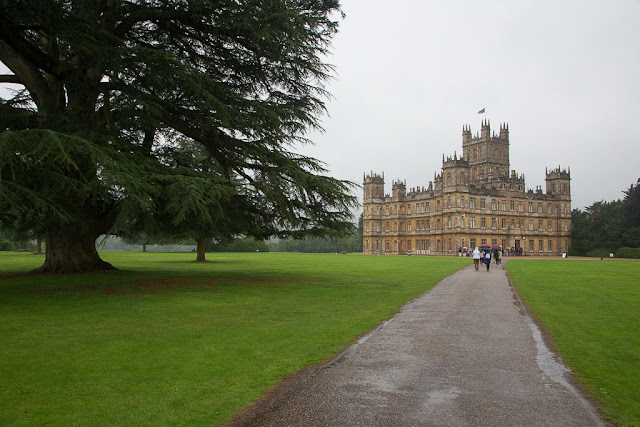 I'm sure many of you recognize this view -- the approach to Downton Abbey! This is not a film still, but a real photo taken by yours truly. Yesterday Dave and I visited Downton, or actually its real-life alter ego, Highclere Castle, in Hampshire.

We took the train from London early yesterday morning, and after an hour's ride and a 15-minute taxi trip -- which we shared with two women visiting from Finland, to cut costs -- we were at Downton's door.

What you can't really see in the picture is that it was pouring rain when we arrived. We bought our tickets about two months ago, so weather wasn't a factor in choosing our date to visit, and we had to simply make the best of it. 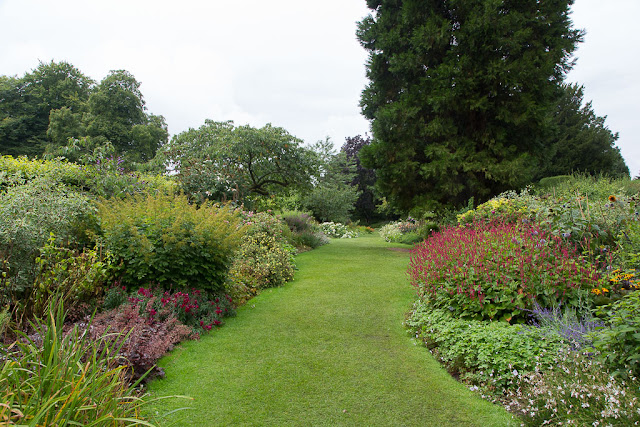 We started by touring the interior of the house, where, unfortunately, visitors are not permitted to take photos. Let me just say that it looks almost exactly like it does on TV. The furniture, the paintings -- nearly all of it is featured in the show. So if you want to see what we saw, watch some Downton reruns!

We saw the public rooms on the ground floor, the large central atrium and grand staircase, and the bedrooms on the second floor. Other parts of the house we did not see, which is perfectly understandable because since the late 1600s Highclere has been home to the Earl of Carnarvon and his family. They really do live there, at least part of the time, and there are signs of modern life here and there, like James Patterson and John Grisham novels stacked on bookshelves. Highclere is not a museum.

Fortunately, by the time we finished walking through the house, the weather cleared a bit and we were able to explore the gardens (above.) 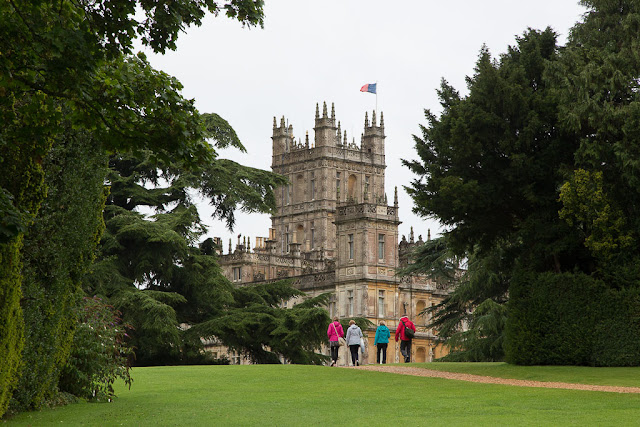 We had a great time checking out all the plants, peering into the greenhouse, crossing the wildflower meadow and watching pheasants wandering around on a hill where a columned temple once stood. The landscape around Highclere was designed by Capability Brown, a legendary landscape designer to the British nobility, in the 1770s. The house itself was rebuilt beginning in the 1840s, according to a design by Sir Charles Barry, who also designed the Houses of Parliament. The interior wasn't completed until after Barry's death, about 35 years after the work began. 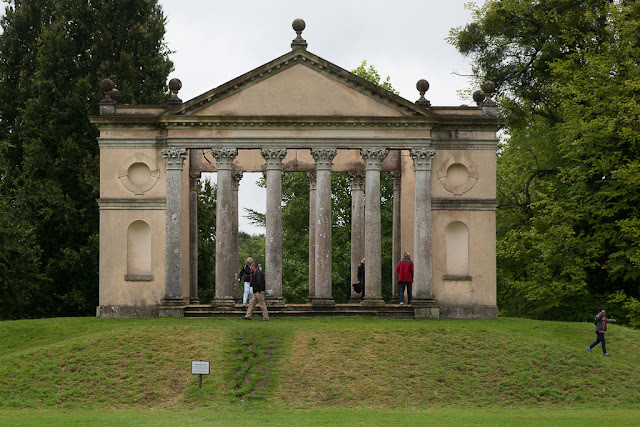 There's a columned architectural folly across the lawn called the "Jackdaws Castle," from 1743. As Dave and I approached it, we began hearing something peculiar. It sounded like a huge crowd murmuring in a sort of monotone. The sound was coming from beyond the temple, so we went to check it out. It turned out to be...

...sheep! Lots and lots of sheep, hundreds of them, crossing a field some distance behind the temple. I'm giving you a video so you can hear them. You can also barely hear the excited Japanese children who followed me to the edge of the field to watch the passing parade.

Anyway, it was a fun day out, and aside from the brief burst of rain at the beginning of the morning, we were pretty lucky with the weather. (Watching the forecast, we'd been afraid it might rain all day.) We caught an afternoon train back to London and were home soon after Olga got in from her walk...just in time to watch a few episodes of Downton Abbey!
Posted by Steve Reed at 7:11 AM

That's one of the reasons why we don't like to get tickets in advance, purely because you never know in this country what the weather is going to be like. Still, glad you had a nice day.
Where on earth were all those sheep going, loved the video.
Briony
x

Sounds like a great day trip and it's good that the weather was bearable. To respond to Briony's question, the sheep were probably heading to a pharmaceutical laboratory to help with insomnia research.

Yorkshire made me laugh.
What a fantastic day! Isn't it fun to be a tourist?
I am reading a book by Mark Helprin called Freddy and Fredericka and it is a thinly disguised and satiric novel about Prince Charles and Lady Diana. I am enjoying it tremendously. You might enjoy it. The British royalty is featured quite prominently.
Do you know I've never watched more than a few episodes of Downton?
I really do want to. I'm not sure why I haven't.

oh this post made me miss Downton so much! A weekly touchstone, now it is Game of Thrones, not quite so gentle. How lucky you are! As you know it takes a very long car ride to get to anything cool here. What a wonderful thing to do.

What a very cool thing to do.

Always interesting to see the real thing after seeing it in the movies.

'house'...funny Steve. I don't think I'd refer to that structure as a house.

What a cool day trip. I've never watched any of Downton Abbey, but I'd really like to. The land looks beautiful there, and those sheep make such a nice background of sound.

Oh my gosh, I'm so glad you got to do this. I've wanted to visit the place for ages but when the show was going, trying to get a ticket was impossible and they only do it for short time period. I follow Lady Carnarvon's blog and she posts photos from inside the house all the time and she always has some interesting stories to tell. Your photos are great! I wish I could have tagged along.

I forgot to mention, I loved listening to the sheep!

What a beautiful place! If I lived there I'm not sure I would like to have people in all the time, even if they weren't in my precise living quarters, but it's fortunate that somehow this family doesn't mind (or needs the fees?)... I suppose one wouldn't need QUITE all that much room to live :)

Those sheep are noisy little things, aren't they?! I like your description - like "a huge crowd murmuring in a sort of monotone" - lol

I don't remember ever seeing the garden during the show so very nice to see that and another side of the castle. So glad it did not pour on you the entire day.
Love the sheep video!