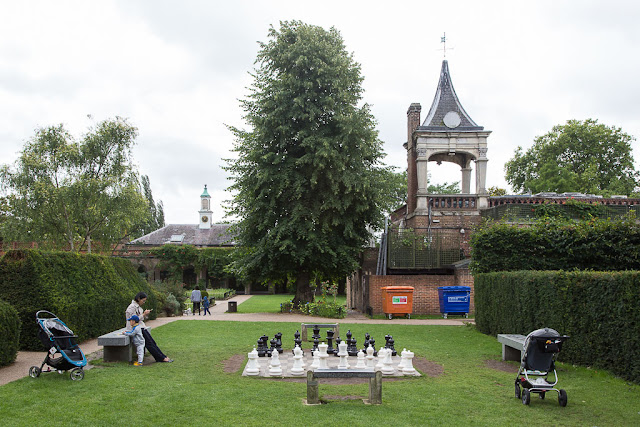 Well, I did get myself out of the house yesterday. I went to Holland Park, took in an art show and had a long, long walk through the city. It was a fantastic day.

When we lived in Notting Hill I visited Holland Park fairly frequently, but I hadn't been there in years. It was like visiting an old friend. The peacocks in the Kyoto Garden were strutting their stuff for visitors: 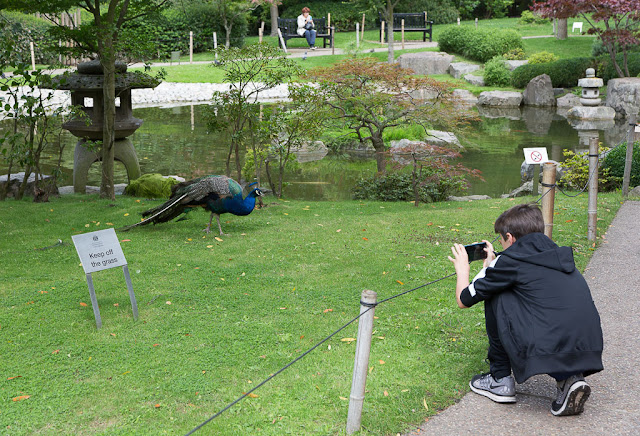 Then I went to the Leighton House Museum, which has a show of works by Sir Lawrence Alma-Tadema, a prominent Victorian artist. I was curious about Alma-Tadema because his former home is near the school in St. John's Wood where Dave and I work. The house has a blue plaque bearing his name, and until I saw that plaque I swear I'd never even heard of Alma-Tadema. So when I got wind of this exhibit I thought I'd check it out.

I was very pleasantly surprised. Alma-Tadema was a brilliant painter whose dreamy scenes of antiquity conjure an idealized, lost world. His perspectives, compositions and level of detail -- the mosaic floors, marble surfaces, draped fabrics, embroidery -- are amazing. His wife and daughters were artists, too, and some of their paintings were on display as well. (I'd post a picture, but photography isn't allowed in the museum. Still, Google him.)

When I got out of the show I went walking through Kensington, Brompton and Fulham, winding all the way to Fulham Palace on the river. This took me the rest of the afternoon -- I didn't get on a tube for home until almost 5 p.m. I stopped in a little restaurant along the way and had an "earth bowl" for lunch. It did not contain, as Dave later surmised, twigs, bark and snail shells, but instead broccoli, carrots, quinoa, kidney beans and walnuts.

It felt great to get out and move around! I'm going to do more of that as our vacation winds to its inevitable conclusion. (I go back to work in a little more than a week!)
Posted by Steve Reed at 6:55 AM

Until you mentioned him, I had never heard of Sir Lawrence Alma-Tadema. Thanks for the heads up. Good to learn that you interrupted your career as a couch potato yesterday. Well done. Gold star awarded for your chart.

Can't that peacock read? Or are they all anarchists?

Of course I've seen his work but never knew who the artist was. Amazing!
Sounds like just about the perfect day.

A lovely day...I looked him up and realized I knew some of the paintings but nothing of the artist. Thanks for the heads up and the birthday wishes!

Sounds like a wonderful way to spend the day. Loved looking at Alma-Tadema's work. So beautiful. I can't believe the vacation ends next week. Time flies, doesn't it!

I have such vivid memories of my visit to this same area last October. I saw a couple of peacocks at Holland Park and I loved my visit to Leighton House. I clicked on the link and looked at the paintings from the exhibit and they certainly seem to go with the exotic decor inside that house. I had not heard of Alma-Tadema's work either. How can that be? I enjoyed my day in that part of town. I remember having a delicious salad for lunch at a place called MK on Gloucester Road. And after lunch I strolled through several mews in the area.

How absolutely beautiful Sir Lawrence's work is! I knew some of his pieces but had never heard his name. Such a delicate hand with the brush, such detail and story in his paintings. Thanks for introducing him to me.

I do love that very very very pricey area! The park is quiet and comfortable , such nice photos. That is quite a walk you did take. My legs would be rubber. Great tip on the museum! I have never even heard of it. so , Yes, and other one on the list! Thank you, Mr. Reed

After looking at numerous of his paintings, I am overcome with the urge to put on a long dress and lie around, anywhere, everywhere! What languid scenes, but what detail.

The earth bowl sounds good, by the way.