Last night I went to see one of my favorite singers, Suzanne Vega, at the Manhattan Center Grand Ballroom. It was great to see her again - the last time I’d seen her live was in 1991 or so during her “Days of Open Hand” tour. I was long overdue!

She sounded great and kept up a funny, easy patter between songs. Some singers never establish much of a rapport with the audience, but she did a great job. Because she’s such a New York-y performer - with many songs set in New York, especially from her latest album, “Beauty and Crime” - seeing her here really added to the vibe.

My only criticism: Her band seemed just a tad too loud, and she seemed a bit strained by the end of the night - probably from trying to sing over them! The show was originally supposed to be at Town Hall, a fact that seemed to vex some people around us, who were bewildered by the seating in the new venue (admittedly kind of bewildering) and missing Town Hall’s “more intimate” atmosphere. Personally, I was happy to see her anywhere. 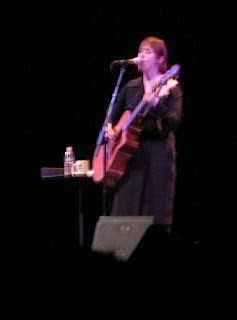 She didn’t play “Small Blue Thing,” which remains a favorite of mine, but she did tackle a wide variety of old and new stuff. Here’s a partial set list, not in exact order:

It still bewilders me that everyone’s favorite Suzanne Vega song is “Luka.” It’s a damned upsetting song about child abuse, yet the people behind me were singing along and bopping around like they were listening to the Go-Go’s. I was like, “Are you hearing the WORDS?”

Anyway, thanks to my friend Brian for prompting me to go to this show. For some reason I don’t do concerts very often. I sometimes need a little push!

(Photos: My blurry attempts at concert photography.)
Posted by Steve Reed at 12:15 PM