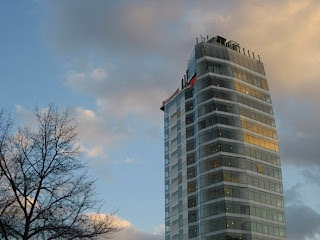 When I lived in Florida, I owned a condo on the second floor of a low-rise building, with verdant views of trees and woodlands. Herons waded in the creek outside my window.

Then I moved to New York, and wound up on the first floor, in a 9-foot-wide apartment facing East 90th Street and overlooking the garbage. I joked that I was the only person to move to New York City, land of skyscrapers, and wind up on a lower floor.

I didn’t mind my street-level apartment, but it could get noisy at times - like when the garbage collectors started banging around below my window at 7 a.m. I was much happier when I moved to my current apartment on East 29th Street in 2002. Here, I’m on the third floor.

Before I came to New York, I’d always wanted to live in a high-rise. It seemed so elegant, the idea of standing before my full-length windows, looking out over city rooftops. The pose almost demands a tuxedo and a martini.

But then, I’m not really a tuxedo kind of guy. (Martinis occasionally!) I have a couple of friends who live in high-rises, and while their views are fabulous, I’ve detected a few drawbacks.

In my apartment, I have a tree right outside. My window looks onto its branches and I feel connected to nature. I hear just enough urban hum to tie me to the city and its street life.

High-rises, though, seem a bit lonely. You’re so far up that you don’t get that connection with the world below. Sometimes you get sound, but overall it’s a little isolating - just you and clouds and rain and pigeons. (And your dwindling bank account - high rises are much more expensive.)

So for now, at least, I’ve come to like the third floor. Unlike the Jeffersons, I won’t be “movin’ on up” any time soon.