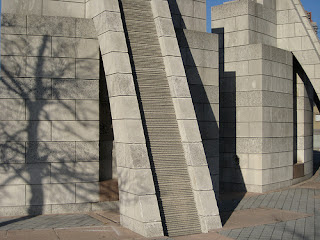 Oh MAN, is it cold. It was around 10 degrees yesterday morning. When I’m walking straight into the wind, parts of my face go numb. Nature demands mindfulness!

Last night I had dinner with some friends from the High Atlas Foundation, a development organization that plants trees and runs other development projects in Morocco. Several of these folks I know from my years in the Peace Corps. (I sat across from another blogger who I hadn't met before. Small world, eh?)

We had an interesting conversation about the moral value of supporting culture (the Metropolitan Museum was the example) versus development or animal-rights causes. One friend argued that it's more worthwhile to donate to animal groups than museums. I argued that supporting the arts has a humanitarian effect, art being an international language that can bridge cultural divides. (Not that I'm against animals!)

Anyway, it was kind of an apples-and-oranges conversation, I suppose, and maybe you had to be there. But I thought it was interesting.

Then I walked over to Avenue A to try to photograph the groovy sign at Mo Pitkin’s House of Satisfaction, but it was dark. I’ve been by three times recently and the darn thing is never lit.