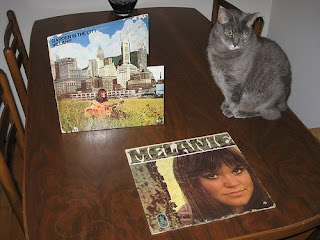 In the years immediately after my parents’ divorce, my Dad went through a groovy ‘70s bachelor phase. He got an apartment with an orangey shag rug in the sunken living room, a couple of bean bag chairs, and a console TV where he, my brother and I watched “The Rockford Files” on Friday nights. He painted and sculpted and drank awful milkshakes made with wheat germ and bananas. He grew lots of facial hair.

He drove a Volkswagen beetle, like any good late-blooming hippie, and its 8-track tape player was perpetually churning out tunes by Donovan, Billy Preston, Three Dog Night and The Fifth Dimension. But he had one tape I especially loved: “Candles in the Rain,” by Melanie.

I was initially drawn to this album by the song “Alexander Beetle,” Melanie’s musical version of an A.A. Milne rhyme from the book “Now We Are Six.” But I grew to like the other songs, too. And then the 8-track broke, like they always did, and that was that. No more Melanie.

At least, not until ten years later, when I was in high school. Prowling through used record stores and flea markets, I began to find Melanie albums. I hadn’t given her much thought in the intervening years, but I bought a copy of “Candles in the Rain” and took it home, and it blew me away. I bought all the Melanie I could find: “Affectionately,” “Garden in the City,” “Gather Me,” “Stoneground Words,” “Madrugada.” I became a total Melanie-head.

To most of my friends, who were all listening to The Police and Prince, this was another of my strange, inexplicable quirks. (I had a thing for The Fifth Dimension, too. I had all their albums at one point -- and there were a lot!) Only my friend Kevin also saw the light, and became just as big a fan.

Melanie had a soulful voice and played a mean guitar. She was a skilled songwriter, and even played at Woodstock. But she got pigeonholed as a hippie, and when hippies went out of fashion, her career never quite recovered. Unfortunately, many people know her solely for her song “Brand New Key,” which doesn’t do her songwriting justice.

I shouldn’t use the past tense to refer to Melanie -- she’s still out there, performing and writing. In April 1991, when I was working as a reporter in Florida, I actually got to sit down with her for an interview. As you can imagine, it was a huge moment for me. We spent an hour or so revisiting the ‘60s, and discussing her career. Her album “Precious Cargo” was just about to be released, and she said she was content to reach smaller audiences with her more adult music.

“What’s a flower child?” she asked me. “I was very into creating things, making them real and not phony, telling people what I was going through and feeling and seeing, mirroring whatever times were going on and what seemed to be happening. Some essence of that must have come out or nobody would have thought of it in the first place, but it certainly was a little bit limiting.”

Kevin and I went to see her perform soon after that interview, and I listened to “Precious Cargo” quite a bit, but I have to admit I always gravitated back to her earlier work. Maybe it’s just what I knew and was comfortable with; maybe it meant more to me, imbued as it was with those memories of rattling down the highway in my father’s Volkswagen, awash in cigarette smoke from his Larks.

Melanie autographed my copies of “Affectionately” and “Garden in the City,” and I still have them, even though I no longer have a record player. (I’ve managed to get several old Melanie albums on CD. My “Candles in the Rain” CD, strangely, doesn’t include “Alexander Beetle.” Did Disney wage a copyright battle?)

Now I hear that Melanie will be performing upstate in August, and I hope to be there.

My Dad still likes Melanie, too. He remarried, but he still drives Volkswagens, still has facial hair, and still smokes -- too much.

The more things change, the more they stay the same.

(This photo is a less skillful ripoff of / homage to Chedwick, whose recent Melanie post inspired mine.)
Posted by Steve Reed at 12:01 PM