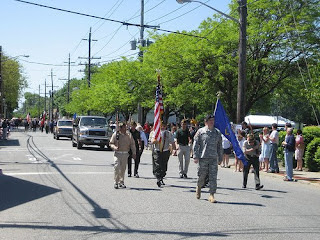 I had a really interesting Memorial Day! Bob and I went out to Long Island, to his step-mother’s house in St. James. She held a small dinner gathering on Sunday night, and then we went to the local parade on Monday and to a champagne party at the historic nearby home of architect Stanford White.

The parade was like something from Thornton Wilder. St. James isn’t a very big town, so it only lasted a half-hour or so, and mainly consisted of local veterans, various scout troops, a band and all the fire and rescue equipment. Our group knew several of the parade participants, so that made it more fun. Seeing the older vets was especially moving -- and I even waved a flag, which as most of you know is entirely out of character for me! (My patriotism is usually more subtle, and maybe more cynical.) 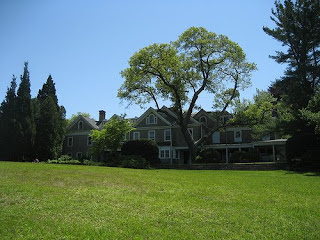 Bob’s family is friendly with the Whites, who still own Box Hill, Stanford White’s summer estate. We sat on the spacious porch and walked around the immense lawn. It was pretty amazing to be plunked into the middle of such a remarkable piece of historic property, and the Whites themselves were very welcoming. (Bob swore they wouldn't mind if I posted a photo of the house. It's a great structure, with lots of gables and pebbly exterior walls.)

In fact, I appreciated the amazing hospitality I was shown all weekend. We caught the train back to New York yesterday evening, and now it’s back to the old grind!
Posted by Steve Reed at 12:17 PM